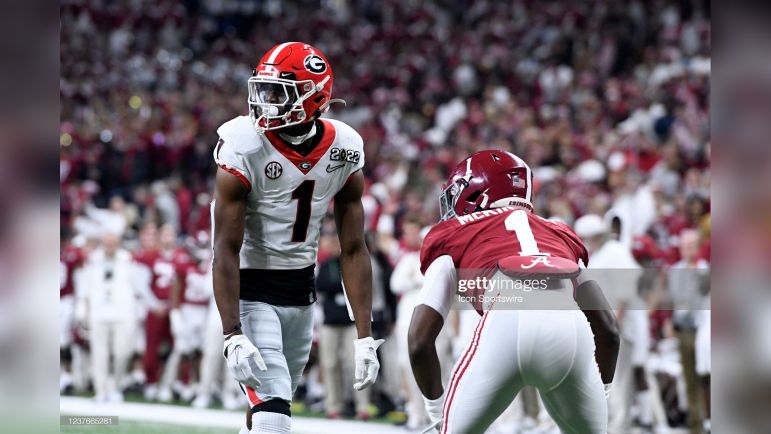 The Pittsburgh Steelers went to the wide receiver well once again on Day 2 of an NFL Draft, coming away with George Pickens from the University of Georgia.

Pickens arrives highly rated as he was able to make an immediate impact as a true freshman for the Bulldogs and was primed for a huge season heading into his junior year this past season before injuring his right knee during the spring. Pickens didn’t allow the injury to halt his intentions to declare for the NFL Draft, and is now ready to contribute at the next level for the Steelers.

In his time at Georgia, Pickens was able to amass an impressive stat line despite an abbreviated final season, hauling in 90 receptions for 1,346 yards and 14 TD’s during his career. What we’re going to look at more in depth is how Pickens was targeted during his time in college.

Within Georgia’s passing attack over the past three seasons, the Bulldogs have relied heavily on targeting their receivers on Hitch routes – a rate of nearly 17% of their pass attempts. The next-highest routes include Go (9.4%), Wide Screen (9.0%), and Out (8.2%).

In looking at the target breakdown below for George Pickens, it’s no surprise his top targeted routes are as such, with exception of the Wide Screen. 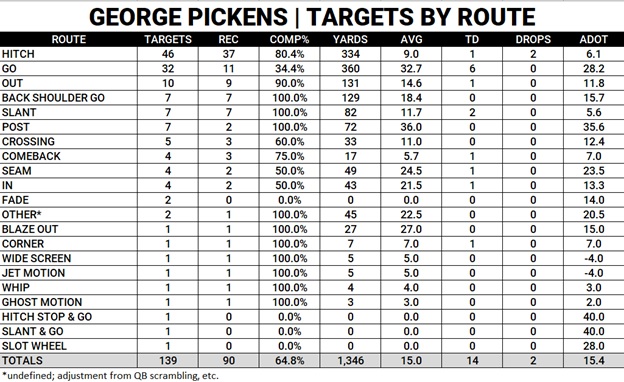 Pickens accounted for 32.7% of Georgia’s targeted Go routes and 26.3% of their Hitch routes over the past three seasons – his top two targeted routes. The one route within Georgia’s offense in which Pickens was targeted rarely on his end was the Wide Screen. The train of thought for this could very well be they viewed him as a true downfield threat and used him as such. For each route listed with two or more targets, all but three of them had an average depth of target of nearly 12 or more yards. The Hitch route is simply a staple of Georgia’s offense based on their numbers, and Slant routes were designed shallow at an average depth of target of 6.8 yards. On Comeback routes, the (four) targets are a small sample size for Pickens, as this was also a rare route for Georgia to target, as there were just 13 overall during his time there for the entire team.

What’s also telling is Pickens was rarely used as a target on simple Jet or Ghost motions. Georgia didn’t target receivers using these motions a great deal, but coupled with the fact Pickens also wasn’t used on screens, the gameplan each week was to get him downfield to work in the secondary.

The drops were also rare, and neither of the two he incurred came on downfield routes. Pickens’ success on Go routes may have caught the Steelers’ eye particularly. As a team least season, Pittsburgh managed to haul in just one TD from a true Go route. Pickens’ talents should help to improve upon on that number with his arrival based on his success at the college level.

Pickens also boasted 15.4 yards in average depth of targets during college and among 267 draft-eligible wide receivers with a minimum of 100 targets this year, his average ranked 24th highest overall. Also, among the current receivers on the Steelers’ roster, Pickens’ career average depth of target ranks right behind the newly-signed Miles Boykin.

In summary, the Steelers appear to have selected a true downfield threat in George Pickens, at least based on his average depth of targets as a Georgia Bulldog. Pickens also brings in experience and success on Hitch routes, which accounted for the second-highest targeted route for the Steelers last season at a rate of 11.8%, and the third-highest (10.1%) during the 2020 season. Pickens should fit in well within the Pittsburgh offense, as he should get opportunities to display his talents, especially downfield.