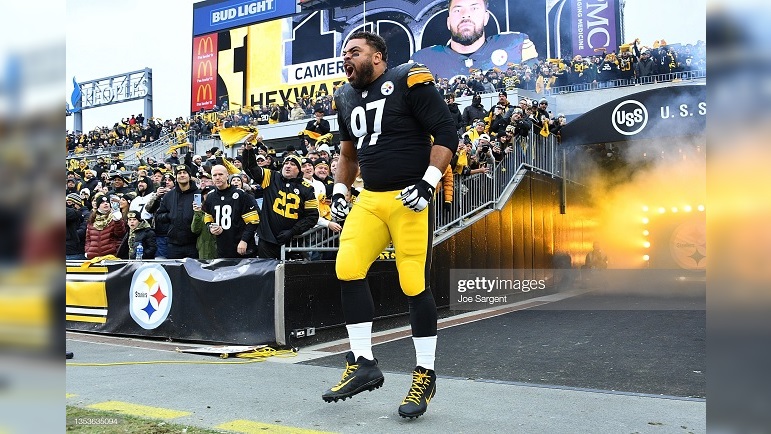 Heinz Field officially became Acrisure Stadium earlier this week, and the name change of the Pittsburgh Steelers’ home venue obviously isn’t sitting well with many of the team’s fans. The stadium name change also isn’t over going well with several Steelers players, current and former, or at the very least, it will take a while for several of them to get used to it. On Thursday on his new podcast, however, Steelers defensive captain Cameron Heyward had a refreshing opinion on Heinz Field becoming Acrisure Stadium this week when asked by his co-host to give his thoughts on the news.

“Oh, man, Heinz Field, in my lifetime, all I’ve known is Heinz Field, you know, me watching football,” Heyward said. “Like Three Rivers [Stadium], I didn’t really watch Three Rivers. But every time there’s a change in stadium, I don’t really put too much stock into that because as much as I’ve loved calling it Heinz Field, like Heinz Field wasn’t made by name. Like, it was made because of the memories. It was made because you got to watch Ben [Roethlisberger] to AB [Antonio Brown], ‘The Immaculate Extension’ they called it [on] Christmas night. It was made watching great plays like that or watching New England come into Heinz Field and watching the Steeler defense beat them up The memories in plays are what made Heinz Field, not the actual Heinz Field.”

That’s a lot different take than what you have seen on social media and the local talk shows this past week, but what Heyward said does hit home. The stadium name is just a name and like it or not, Acrisure Stadium is going to be the name of the Steelers’ home venue for at least the next 15 years.

Heyward went on to insinuate that fans will eventually come around to the name change and perhaps even christen it with a new nickname at some point.

Steelers fans are creative, so I trust what Heyward said will come to fruition. That said, it’s going to likely take a little time for most of them to come around. Heck, I’m sure several will never come around, and thus defiantly keep calling the Steelers home venue Heinz Field. That’s certainly understandable.

Overall, Heyward wanted to drive home the point on Thursday that nothing has changed other than the name and that Steelers will continue to create long-lasting memories at the venue the team has played in since 2001.

“It’s not like we’re playing somewhere different,” Heyward said. “Like, it’s still where you guys always go to watch a game. Like, we’re gonna still be thumping. You’re still gonna hear ‘Renegade’. You’re still gonna get out of your seats and get excited in December and January. Like, those things aren’t changing. It’s a name, guys. Like, I understand like it’s been really cool to call it Heinz Field and we’re gonna miss the big ketchup bottles dumping down on a touchdown, but Acrisure better come with that fire because we’re gonna make sure we do our job as well.”

You heard Cam, come with that fire, Steelers fans. Quit complaining about the name change. Get ready for new memories to be made at Acrisure Stadium.