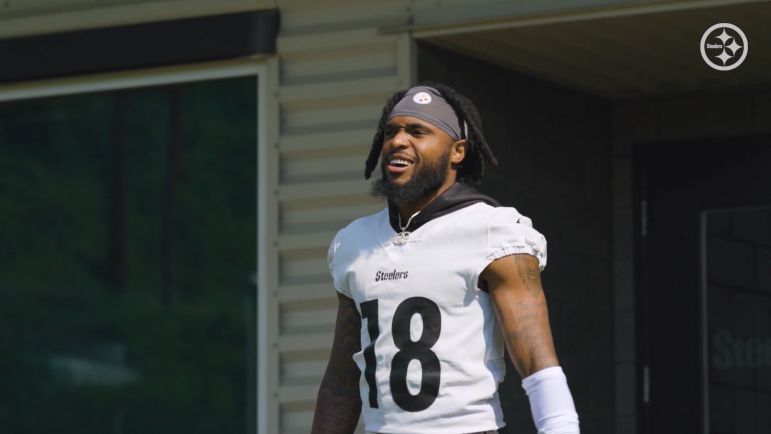 Topic Statement: Diontae Johnson will repeat as a Pro Bowler in 2022.

Explanation: Whether or not he actually gets a new contract in the next couple of months, Diontae Johnson still has 17 or more games to play. He has put up better numbers every year, and should in theory have a broader range to work from this year.

Like him or not, Diontae Johnson is one of the shiftiest wide receivers in the NFL. He gets open, so he gets targets, and that’s not going to change in 2022. Chase Claypool didn’t steal his targets last year, and a rookie isn’t going to come in and do that, either. By sheer volume, he should easily have a productive year.

Now unhindered by the necessary concessions of the Ben Roethlisberger offense, Matt Canada can open things up more with Mitch Trubisky and Kenny Pickett under center, which includes setting up more routes that actually take development. The offensive line is better, and these quarterbacks are mobile, which should help Johnson have a more robust rout tree and further enhance his ability to make an impact in ways he hasn’t up to this point in his career.

Make no mistake, Johnson had a good season last year. He put up good numbers. But he went to the Pro Bowl as an alternate. There are a lot of really good wide receivers in this league, and now Davante Adams is in the AFC. Ja’Marr Chase is going to be a perennial Pro Bowler moving forward as well. It’s not easy to make the Pro Bowl as a wide receiver unless you’re putting up Antonio Brown numbers.

And Johnson doesn’t have the quarterback to put up Antonio Brown numbers. Nor the offense as a whole. This offensive line, for starters, still has a lot to prove, and they’re trying to round out their running game at the same time.

A big absence in Johnson’s repertoire in terms of a complete offense is the deep passing game. Neither Piickett nor Trubisky are really any better than Roethlisberger had been in the late stages of his career delivering the ball down the field. So that means Johnson will have to keep working underneath and picking up 10-11 yards at a time. Absent those chunks, it’s hard to do volume.