The Pittsburgh Steelers recently signed rookie quarterback Kenny Pickett and veteran defensive tackle Larry Ogunjobi to contracts, and now that those deals have been filed with the NFLPA, we can update the team’s 2022 salary cap status with a little less than a month to go before the team reports to Saint Vincent College in Latrobe for their annual training camp.

As of Tuesday morning, the NFLPA site shows the Steelers as being $10,545,841 under the cap following the reporting of the Ogunjobi and Pickett deals. That number is wrong, however, as there is a data entry error related to the new contract extension signed by Steelers safety Minkah Fitzpatrick that needs to be corrected, according to Joel Corry of CBS Sports. Basically, the NFLPA is currently counting the $3.5 signing bonus proration in Fitzpatrick’s new deal twice. I would expect the NFLPA to rectify that error in the next few weeks.

The NFLPA now shows Steelers as being $10,545,841 under the cap after the Pickett & Ogunjobi deals hit. That number is wrong, however, as there's a $3.5M data entry error with the Minkah Fitzpatrick contract, per Joel Corry. Team is really $14,045,841 under right now. #Steelers pic.twitter.com/80FqmSJEyk

With that error adjustment accounted for, the Steelers are now $14,045,841 under the cap as of Tuesday morning. The only thing outstanding at this point could be a small injury settlement amount for former cornerback Bryce Watts that has yet to show up.

Now that we know where the Steelers currently sit with all draft picks signed, what’s next? Well, the team will still need to be able to accommodate a full 16-man practice squad as well as a 52nd and 53rd player under the cap. That projects to be an additional $5,143,200 in salary cap space. Additionally, the team will go into the 2022 regular season with buffer cap space. The last few seasons that amount has been right around $9 million, so that’s what my updated projection shows below. That amount could obviously wind up being larger or smaller. We’ll see.

Remember, the Steelers might need to start off the 2022 regular season with a few players on their Reserve/Injured list, and thus the salaries of any replacement players that do make the 53-man roster must also fit under the cap as well. In 2021, the Steelers started Week 1 with tackle Zach Banner, running back Anthony McFarland Jr., defensive end Stephon Tuitt, defensive tackle DeMarcus Christmas, and cornerback DeMarkus Acy all on the Reserve/Injured list.

The Steelers might ultimately sign kicker Chris Boswell to a contract extension later this summer, and if that happens, it could result in a slight decrease in his currently schedule 2022 cap charge of $4,948,334.

Will the Steelers sign wide receiver Diontae Johnson to a contract extension later this summer? If they do, Johnson’s currently scheduled 2022 salary cap charge of $3,073,357 would surely increase and quite a bit at that.

Obviously, the Steelers could decide to restructure the contract of outside linebacker T.J. Watt later in the offseason to free up any needed salary cap space for 2022. Will they need to? Only new Steelers general manager Omar Khan can probably answer that question as we sit here in late June. 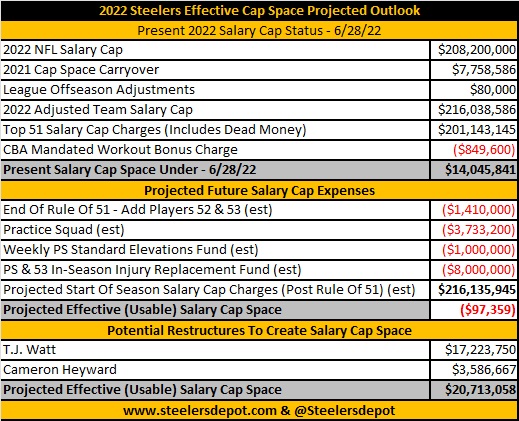