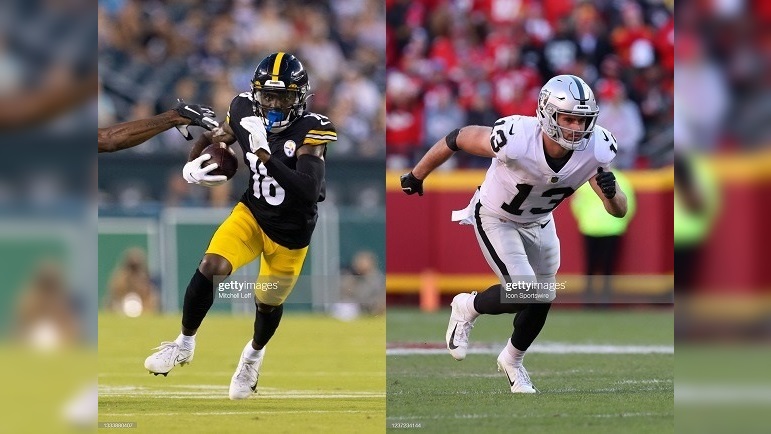 The Las Vegas Raiders recently signed wide receiver Hunter Renfrow to a contract extension and ever since that news hit over a week ago, there have been numerous people suggesting that the Pittsburgh Steelers should sign wide receiver Diontae Johnson to a similar two-year extension this summer and without even seeing the numbers. Now that the official numbers for the Renfrow extension have been uncovered by Over the Cap, I think it’s a great time to break them down and see if indeed it would be a deal that Johnson might entertain signing at some point before Week 1 of the 2022 regular season.

Let’s start by looking at what Renfrow was originally scheduled to earn in 2022 prior to him signing his new deal. That amount was set to be $2.54 million as he had qualified for a Proven Performance Escalator raise for 2022. That $2.54 million is officially termed as being old money.

In 2023, Renfrow is scheduled to receive a fully guaranteed roster bonus of $4.32 million. That brings the amount of full guarantees related to his new deal to $14.5 million. He is also scheduled to earn a base salary of $6.5 million, which I believe as of right now is only an injury guarantee. If Renfrow is on the roster on the third day of the 2023 league year, that $6.5 million then becomes fully guaranteed. He can also earn another $629,000 in 2023 via per-game roster bonuses. A $100,000 workout bonus is also available to him in 2023 as well.

So, let’s recap where Renfrow will be through the 2023 season. The maximum cash he can earn through the 2023 season is $22.358 million and that’s only if he hits all of his roster bonuses and satisfies the requirements for his workout bonus. Remember, Renfrow was previously scheduled to earn $2.54 million in 2022 so his maximum new money total through 2023 would be $19.818 million.

While very unlikely to happen, the Raiders could cut Renfrow after the 2022 season and prior to the third day of the 2023 league year. If that were to happen, and if Renfrow were to hit his full roster bonuses in 2022, he would exit Las Vegas with $15.129 million.

In total, Renfrow can earn a maximum of $34.24 million over the course of the next three season. Currently, only $14.5 million of that money is fully guaranteed. With $31.7 million of that full contract being considered new money, Renfrow’s official new money average is just $15.85 million. He is now considered the 19th highest paid wide receiver in the NFL as a result of that deal.

So, after breaking down Renfrow’s extension, how many of you reading can fathom Johnson taking the same deal? I certainly can’t. Just $14.5 million fully guaranteed is likely something Johnson and his representation would laugh at, along with a new money average of just $15.85 million.

As I have stated for several months now, I fully expect Johnson to be looking for a new deal that includes a new money average of at least $20 million. Additionally, and based on how most other wide receivers have been paid this offseason (Mike Williams, D.J. Moore, Amari Cooper, Chris Godwin, Christian Kirk), I would expect Johnson to be looking for at least $37 million in fully guaranteed money in a new deal and that’s the low side.

In closing, in now way, shape or form should Renfrow’s recent contract extension be used as a plausible option when it comes to Johnson. If the Steelers were to get Johnson to agree to such a deal, Omar Khan should instantly be awarded General Manager of the Year for 2022.