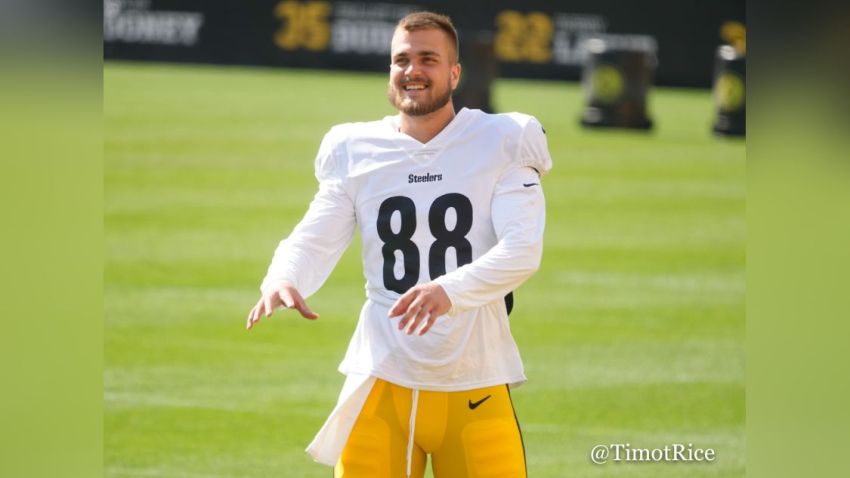 As a rookie throughout the 2021 season, Pittsburgh Steelers’ tight end Pat Freiermuth did what few rookies have ever done at the position: have a rather productive season.

Historically, the transition to the NFL at the tight end position is rather difficult for rookies due to the responsibilities as an in-line tight end and as a pass-catching weapon in the middle of the field against bigger, stronger, faster athletes and less space than the collegiate game.

Freiermuth paid no attention to previous about concerns of a learning curve, instead putting up an impressive rookie season, hauling in 60 passes for 497 yards and seven touchdowns, quickly developing a strong connection with quarterback Ben Roethlisberger, serving as his security blanket in the middle of the field.

Look at that pump fake from Ben Roethlisberger. Completely freezes the safety, lets Pat Freiermuth burst away for the TD. #Steelers pic.twitter.com/Qp8nAV7c5n

Now, with Roethlisberger retired and the Steelers transition to quarterbacks Mitch Trubisky, Mason Rudolph and Kenny Pickett, Freiermuth will take on a larger role overall, especially with veteran tight end Eric Ebron no longer around, putting the TE1 firmly in Freiermuth’s grasp. Therefore, Freiermuth is the Steelers’ top breakout candidate for the 2022 season, according to Bleacher Report’s Alex Kay.

“The Penn State product established himself as an up-and-coming player, appearing in 16 games and drawing nine starts while catching 60 of his 79 targets for 497 yards and seven touchdowns,” Kay writes regarding Freiermuth’s selection as the Steelers’ breakout player candidate. “After sharing time with Eric Ebron for the first half of the season, Freiermuth is now the unquestioned No. 1 option.

“He will likely log more snaps after earning just 683. The 23-year-old’s statistics and playing time will see a bump after Pittsburgh elected not to retain Ebron in free agency,” Kay added. “Thanks to his hulking size and large catch radius, the 6’5″, 258-pounder will remain a focal point in the red area regardless of which signal-caller wins the starting job.”

With the changes at quarterback and in the offense in year two under offensive coordinator Matt Canada, Freiermuth should be able to exploit the middle of the field much more as a pass-catching weapon, which should — in theory — open things up on the boundary for guys like Diontae Johnson and Chase Claypool, and could lighten the box a bit for Najee Harris on the ground.

Freiermuth certainly had some highs and lows during his rookie season, but with that added experience under his belt and the understanding of the expectations and what’s required to succeed in the NFL, a big second year could be ahead for the reliable, sure-handed tight end in 2022.