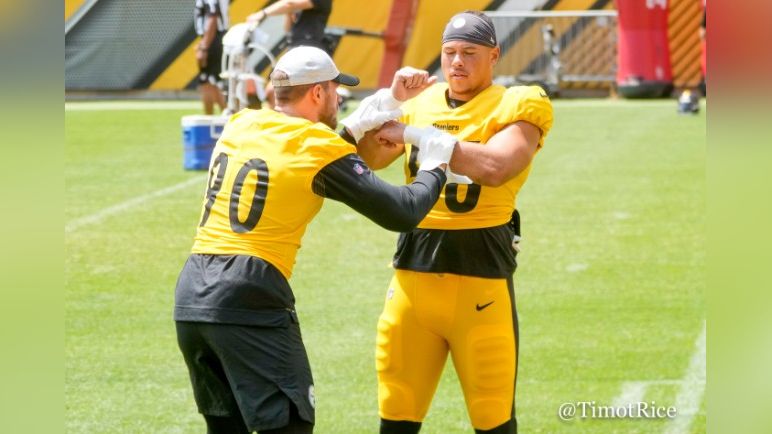 When you have the best pass rusher in the NFL lined up opposite of you on seemingly every single snap, it’s hard to not try and emulate a guy that has as much success as Pittsburgh Steelers’ star outside linebacker T.J. Watt has.

For third-year linebacker Alex Highsmith, that’s exactly what he’s trying to do at a micro-level moving forward. All pass rushers — and athletes in general — are different, but that doesn’t mean they can’t try and take things from the game of others here and there. Highsmith is aiming to do that in 2022 as he looks to get around the 10-12 sack number in his second full season as a starter.

Appearing on the Cook and Joe Show with hosts Ron Cook and Joe Starkey on 93.7 The Fan Friday afternoon, Highsmith stated he believes Watt’s best football is still ahead of him, and said that he pays a lot of attention to the reigning NFL Defensive Player of the Year, breaking down his film whenever he can, according to audio from 93.7 The Fan.

“Yeah, and I still think his best football is ahead of him, cause he’s a guy that comes in and continues to work every single day,” Highsmith said to Cook and Starkey Friday, according to audio via 93.7 The Fan. “He’s the same person every day. And I just love working with a guy like that who truly loves his craft and loves just to be the best versions of himself. So, I like to watch a lot of his film as well, you know, watch myself. I like to see what he does to help him win.

“I’ve been working with him during OTAs and stuff, trying to break down stuff and really just trying to work just like I was talking about, the top end of my rush and just being able to finish,” Highsmith added. “So just taking little things that he does to help him be able to hit home as much as he does.”

Trying to emulate the best pass rusher in the NFL can be a tall task, but Highsmith has shown he can match the work ethic and the overall commitment and passion to football that Watt has.

In two seasons with the Steelers, Highsmith has developed into a solid No. 2 outside linebacker opposite Watt, growing leaps and bounds as a run defender and overall pass rusher since coming to the Steelers as a third-round draft pick out of Charlotte, where he was a former walk-on.

One of Highsmith’s goals ahead of his third season is to finish at the quarterback more often, turning pressures into sacks in hopes of reaching that 10-12 sack number he’s set as an individual goal, on top of bringing a Super Bowl trophy to Pittsburgh as a team goal. Watt has figured out how to finish at the quarterback consistently since stepping into the NFL, and that’s exactly what Highsmith is trying to learn from, whether it’s his angle to the quarterback, specific combinations he uses to beat blockers, and more.

Working with Watt and breaking down his film should do wonders for Highsmith in his third season. If he can elevate his game closer to a Pro Bowl level, the Steelers’ defense could truly be a formidable force once again.