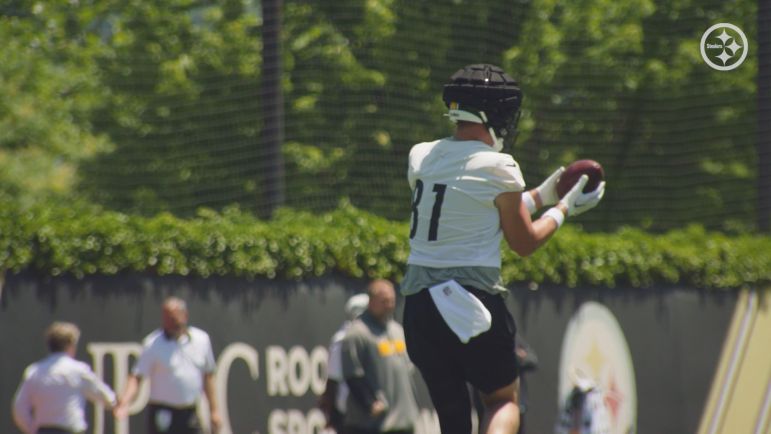 Reasoning: The fourth-year tight end is entering his biggest role of his career year, looking to expand his repertoire of what he’ll be asked to do on offense, while doing more of what he has been doing. He has put on healthier weight in preparation and is getting more comfortable in a receiving role in the offense, based on spring reports.

It must be nice to work with your BFF—even to meet your BFF on the job. That’s what Zach Gentry and Pat Freiermuth seem to have with the Steelers. The two became instant friends when Freiermuth was drafted last year, and though Gentry has been in the league two years longer, they are now growing together and potentially developing into a formidable one-two combo at the tight end position for the Steelers.

Gentry was a fifth-round pick out of Michigan in 2019, a former college quarterback whom the Steelers understood would need time to develop. Well, he basically got two redshirt years and then became a significant contributor last season, beginning and ending the year as their primary blocking tight end.

But he will be in for an even bigger role this season, most likely, and he’s bringing in tow an even bigger frame. He came into the league a bit thin for his frame, but the Steelers drafted him knowing that he could add to his build. He has now.

Where he could really be useful is in 12 or 22 personnel, because having two receiving-capable tight ends can really expand your arsenal and decrease your predictability. If you can both run and throw with Freiermuth, Gentry, and Harris all on the field—maybe even with Derek Watt or Connor Heyward—then you can force teams to pick their poison and run RPOs all the way down the field.