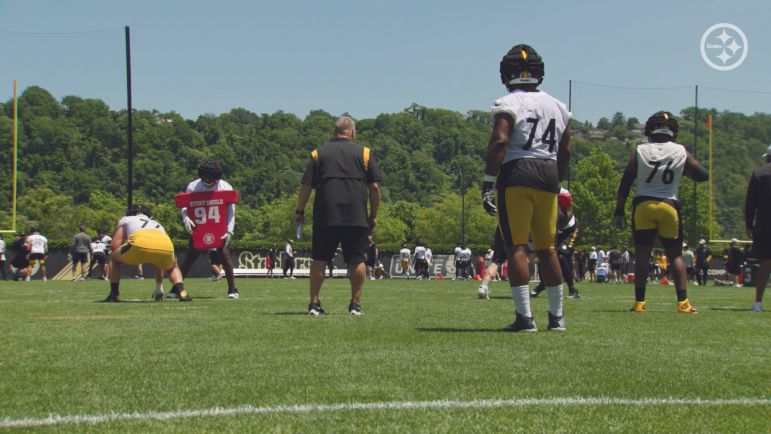 Dan Moore Jr.: A fourth-round pick a year ago, Moore was a 17-game starter at left tackle. He needs to take a sizeable step forward in year two in order to solidify himself as this team’s left tackle of the future, but the Steelers believe he has the talent.

Chukwuma Okorafor: Signed this offseason to a new three-year deal worth nearly $30 million, Chukwuma Okorafor is clearly remaining in the starting lineup. They gave him money that shows they believe he is a starter. Yet at the same time, it’s not a contract they can’t get out of a year from now.

Joe Haeg: A veteran journeyman, Haeg appears set up to retain his role as swing tackle that he held last season, with the team not significantly addressing the position.

Chaz Green: After spending most of the 2021 season on the Steelers’ practice squad, the veteran will be competing primarily with Trent Scott for the number four tackle job.

John Leglue: Thanks to his ability to play any position along the offensive line, Leglue is keeping his name alive in the race for a roster spot after becoming the team’s emergency starter at left guard at the end of last season.

Trent Scott: Another veteran journeyman, Scott has followed new Steelers offensive line coach Pat Meyer wherever he’s been thus far. We at least know that he knows what his new (or rather old) position coach wants out of him, but that’s about it. He is a replacement-level reserve.

Jake Dixon: A 6’6” rookie out of Duquesne who can stand to pack on a few pounds, Dixon was signed as a rookie free agent. He is a two-year full-time starter at left tackle with all-conference honors.

Jordan Tucker: Tucker is another 6’6” college rookie free agent, but tips the scales at 340 pounds. The North Carolina product has exclusively been a right tackle but has 36 games of starting experience on his college resume.

The Steelers never addressed the offensive tackle position in a significant way this offseason after cutting Zach Banner, whom a year ago this time they expected would be their starting right tackle. There doesn’t appear to be any budding competition for starting jobs, and even the swing tackle role seems set to be uneventful.

At least there should be some competition for the fourth tackle role, most likely between Turner, Green, and Leglue, the latter also offering five-position flexibility. Of course, there are always practice squad spots to fill out as well, and it’s never a bad thing to find a diamond in the rough among college free agents, an area in which the Steelers have been successful with offensive linemen.