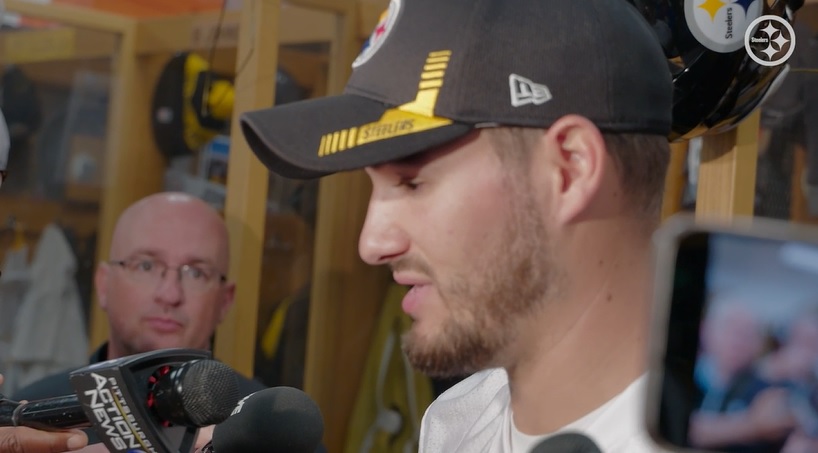 After OTAs concluded and the media was allowing into the locker room to speak with the players, reporters spoke with QB Mitch Trubisky regarding his first few days of OTAs with his new teammates in Pittsburgh.

Trubisky was also asked about any potential pressure he may feel to produce now with the Steelers, given the fact that he was selected over the likes of Patrick Mahomes and Deshaun Watson at #2 overall in the 2017 NFL Draft by the Chicago Bears. Given the nature of his exit from Chicago and his year on the bench in Buffalo, Trubisky was asked in an interview posted to the team website if he compared his career arc to the other quarterbacks selected.

While Trubisky may have lived up to the #2 overall draft slot Chicago spent on him back in 2017, he hasn’t been a complete bust when it comes to NFL quarterbacks. He currently carries a record of 29-21 in 50 career starts and has thrown 64 touchdowns to 38 interceptions, completing just over 64% of his passes. While his play was inconsistent in Chicago as Alex Kozora depicted after the initial signing of Trubisky, part of the blame will fall on the shoulders of former Bears HC Matt Nagy and his inability to progress the offense forward during his tenure in Chicago.

Trubisky isn’t without his warts as Kozora breaks down in this film room on the QB, but he does bring experience, a track record of being a capable starter with a winning record, a near 2:1 TD-to-INT ratio, and has the athleticism to make plays outside of structure given his mobility. He isn’t at the same level as Watson or Mahomes in terms of his accomplishments on the field to start his career, but given his experiences in Chicago and time spent in Buffalo, he understands that his tenure in Pittsburgh comes with a clean slate for him to go out and establish himself as a starting NFL quarterback.

“This is the NFL. There is always going to be pressure. Your job is to go out there and win games. I’m grateful for my path and I’m just happy it landed me here in Pittsburgh.”

Trubisky finds himself in a three-man race for the starting QB job with incumbent Mason Rudolph and rookie Kenny Pickett. While he may not have exactly lived up to the expectations put on him when he came into the league, Trubisky understands that those problems are a thing of the past. All his focus should be on is going through OTAs and mandatory minicamp before going into training camp later this summer while getting the playbook down, developing chemistry with the rest of the offense, and putting himself in position to win the starting job and be the player Pittsburgh needs him to be to win football games in the hopes of securing a playoff spot in the AFC.