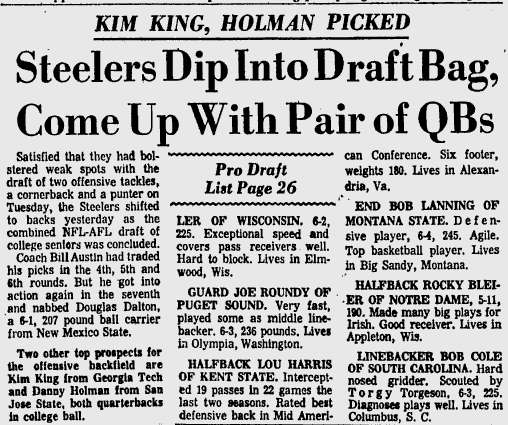 Kevin Colbert did just about everything a GM could do over the course of the 23 NFL Drafts he oversaw as Pittsburgh Steelers GM/de facto GM. He traded up, traded down, took Hall of Famers, took busts, heck, the guy even drafted a long snapper.

About the only thing he hadn’t done on his draft Bingo card was select two quarterbacks in one draft. After 2004, there was never a need to. And any team taking two in one draft, while not unprecedented, is pretty rare. But in his final draft, Colbert grabbed a pair of arms at its beginning and end, selecting Kenny Pickett in the first round and Chris Oladokun in the seventh.

For the Steelers, that hasn’t happened since the pre-Noll era. A quirky history lesson today going back to 1968, the last time Pittsburgh selected two QBs.

Of course, in 1968, the NFL Draft acted and looked much different. It wasn’t made for TV. Heck, it had only been ten years since the ’58 Championship Game between the New York Giants and Baltimore Colts, widely considered the first NFL game that really made a television presence. The structure of the drafts were different, too. Seven rounds to a draft were teams just getting started. Back then, there were 17 rounds, allowing clubs to more freely double-up on positions. That 17-round structure remained until 1977 when it was reduced to 12. It took until 1994 for the league to move to the present-day, seven-round layout.

In that ’68 draft, Pittsburgh took their quarterbacks later in the draft. There was no early-pick headliner. That’d come in 1969 with Notre Dame’s Terry Hanratty (second round) and of course, in 1970 with Terry Bradshaw (first round, first overall). The Steelers’ picks came on Day 2 of the draft, in the eighth round by choosing San Jose State’s Danny Holman and again in the 11th round with Georgia Tech’s Kim King.

You’ll also notice the brief draft report on one Notre Dame RB Rocky Bleier, the team’s 16th-round pick that year. Little did that PPG blurb know how important of a player and story Bleier would become.

Now, there is an important caveat here and the reason for my “sort of” qualifier in the title. Technically, the team drafted two college quarterbacks. But they only intended one to stay there in the NFL. The left-handed King moved from quarterback to running back, as noted in the Post-Gazette’s article the following day. Some other nuggets from this photo you’ll see below: BLESTO-V was the temporary name of the national scouting agency with the “V” standing for “Vikings.” The rest of the acronym represents: Bears, Lions, Eagles, Steelers Talent Organization. In the last paragraph, check out the reference to Holman being rated just below Alabama’s Ken Stabler, drafted by the Raiders in the second round. 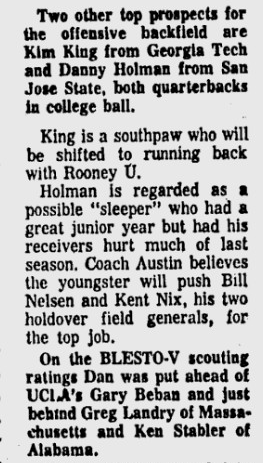 Bill Austin’s hopes of Holman being a sleeper didn’t workout. Holman nor King ever appeared in a NFL game. By 1969, Holman was playing in the forgotten Continental Football League, an American based outfit, appearing in games for the Spokane Shockers (who funny enough, were originally named the Victoria Steelers), a team led by former Steelers’ receiver coach Hugh Taylor. Holman’s numbers weren’t awful for the time, throwing more touchdowns (13) than interceptions (11) and completing 53% of his passes. He played for the Norfolk Neptunes the following year.

There isn’t much record on King’s professional career, if there’s any at all. But he left quite a legacy the rest of his life, becoming an Atlanta real estate mogul. He kept close ties with Georgia Tech, a beloved figure who served as a color analyst beginning in 1974 while playing an important role as chairman on various school boards. The Yellow Jackets’ locker room was named after him, the Kim King Football Locker Room. King died in 2004 after multiple battles with cancer, a somber day for the entire campus.

“Kim truly loved Georgia Tech, and especially Tech football,” then school athletic director Dave Braine said. “He was a tremendous ambassador for the program, and he was loved by so many people. To say that he will be missed is an understatement.”

It may be a long time until the Steelers duplicate what they did in 1968 and 2022. Hopefully Kenny Pickett becomes as the team envisions, the Steelers’ next franchise QB. And we’re not even having a quarterback discussion come draft time for the next 15 years.