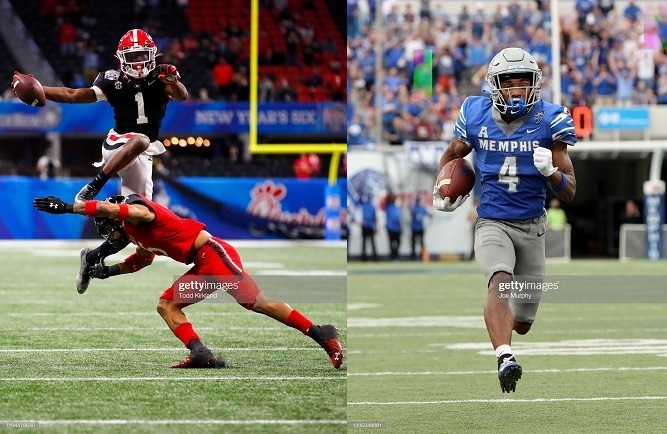 The Pittsburgh Steelers double dipped at the wide receiver position in the 2022 NFL Draft, so today I wanted to start a series looking at and providing context for the position using Sports Info Solutions (SIS). The data in this study is from the wide receivers final two college seasons, and a few players were excluded due to SIS not tracking smaller school players. The goal is to see how Pittsburgh selections George Pickens and Calvin Austin III stacked up amongst their peers.

To start the series, I wanted to see the value of air yards and yards after catch, so I calculated the SIS data to get a completed air yard percentage (CAY% = completed air yards/intended air yards) to gain context of opportunity and connectivity along with a yards after catch percentage (YAC% = yards after catch/total yards) to see what wide receivers created once the ball was in their hands. This gives us great context of what the players provided for their team and how they were used as we look forward to their rookie seasons. Below is a visual of the above data points along with their dot size representing targets: 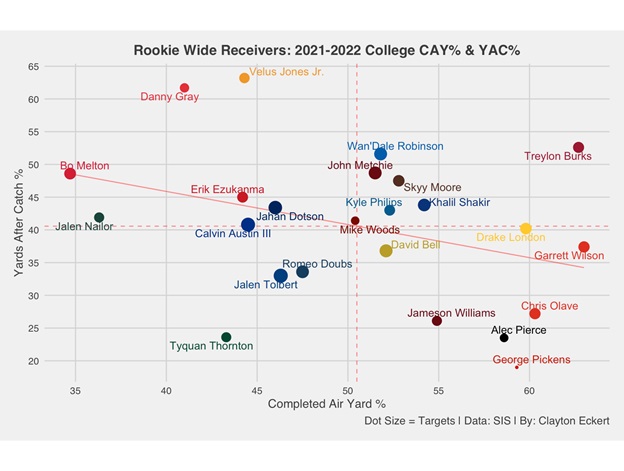 Pickens was selected in the second round, and many Steelers Depot contributors have highlighted his value down the field. The visual above provides comparative context of Pickens in this regard, ranking fifth in CAY%. This ability is a great addition to Pittsburgh’s offense, who lacked in explosive plays and quantity of downfield throws in recent years. There is the other side of the coin though, with his lowest rank in YAC% of the 24 players on the graph along with the least number of targets and games played. The latter highlights injury concerns that likely played a factor in Pittsburgh’s ability to scoop up this first round talent at pick #52.

Pittsburgh’s fourth-round selection Calvin Austin III provided stronger value in the former’s lower marks, especially in workload with the second most targets of the qualifying wide receivers. Interestingly, he was one of only two players to have over 100 targets in each of the last two seasons, encouraging context that hopefully carries over to his NFL career if his toughness can outweigh (pun intended) his stature. We can see Austin III is also above the mean in YAC% along with providing an encouraging uptick from 35.1% in 2020 to 46.4% in his final college season, and was used with good variety in his routes, especially compared to Pickens as highlighted by our own Andrew Shaver.

Seemingly, Pickens and Austin III should complement each other well with their varying skillsets along with the veterans already in the position room, and here’s to hoping Pittsburgh made the right choices to hopefully bolster the offense that has many new faces at several positions.

Throughout the rest of the offseason, I will dive deeper into the data as we continue to learn about the newest Pittsburgh Steelers. How do you think the Steelers selections will fare in their rookie year? What are some of your takeaways across the league? Thanks for reading and let me know your thoughts in the comments!