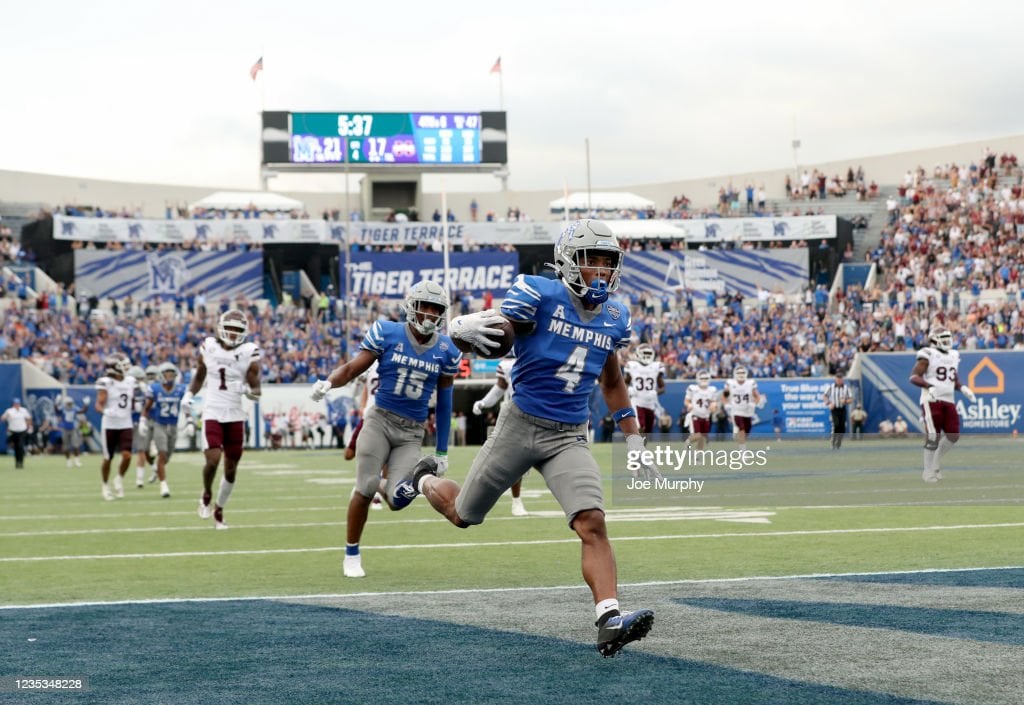 After the selection of Georgia WR, George Pickens, Pittsburgh decided to once again grab another receiver in this year’s NFL Draft by taking Calvin Austin III out of Memphis.

Austin’s measurable’s at first glance may seem underwhelming, but don’t let his size and stature fool you, because he can play the wide receiver position well. Austin, a four-year player at Memphis, posted impressive stats and did so running a variety of routes during his college career from both the slot and out wide.

Let’s first look at how the Memphis Tigers’ passing game operated during Austin’s time there in terms of highest percentage of routes targeted. Memphis relied on Hitch routes at the highest rate, 13.5%, followed by Wide Screens (10.2%), Slants (8.6%), and Go routes (8.4%).

Based on the structure of Memphis’ passing attack, Austin’s most frequently targeted routes should offer no surprises in the breakdown below. What some may find a bit surprising however is the Go route is the second-highest considering Austin isn’t exactly a tall receiver who can battle defensive backs on jump balls. 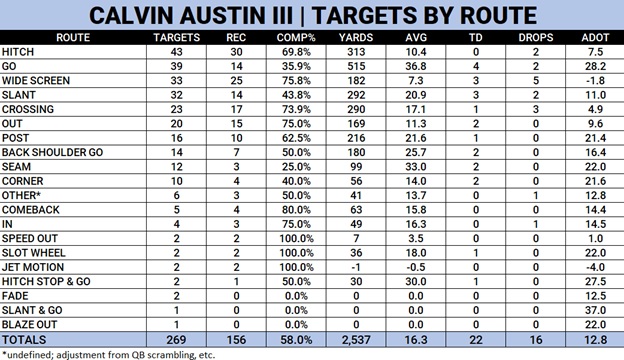 Something else which should catch the eye is Austin’s average depth of target. Among 267 draft-eligible WR’s with a minimum 100 targets during their college careers, Austin ranked 83rd overall with a 12.8 ADOT. If removing Wide Screens from the equation, Austin’s ADOT is 14.8 yards and ranks him 53rd among 237 WR’s with at least 100 targets. By all appearances, Pittsburgh landed another downfield threat in addition to George Pickens.

If you’ve already read Austin’s Steelers Depot draft profile, you quickly discovered he has home run speed. So, it makes perfect sense why Austin accounted for 33.6% of the Memphis Tigers targeted Go routes over just the past three seasons. To reiterate again though, with his size, giving someone a chance to guess which route in college Austin scored his highest number of touchdowns from, it’s doubtful the Go route is among the initial guesses unless the person has watched Memphis football.

Another topic to discuss involving Calvin Austin is his slot presence. During his time at Memphis, Austin lined up at a rate of 22.7% of passing snaps in the slot. In looking at how he performed on those 61 targets, Austin produced some impressive numbers.

On just 38 receptions, Austin found the end zone on ten occasions while averaging 17.7 yards per reception – fifth-best among draft-eligible WR’s with 50 or more targets from the slot during their career. The 15.2 yards of ADOT ranked second-highest among the same group.

The Steelers as a team last season ranked tied at the bottom of the league with only 17 receptions from the slot 10+ yards downfield. Some hope to improve upon this arrives with the selection of Austin if the plan is to use him as a slot receiver. Considering he wasn’t used a great deal in the slot at Memphis, he was able to produce well.

The last part of Austin’s receiving performance by route we’ll look at is strictly out wide.

The numbers compared to those from the slot dip a little in terms of completion percentage, yards per reception average and ADOT. Also glaring is the 23.1% completion rate on Go routes and zero TD’s. Basically, Austin did far more with less opportunities from the slot on Go routes than when lining up out wide.

Among current Steelers wide receivers on the roster who have more than 10 receptions in the NFL, Diontae Johnson, Chase Claypool, and Miles Boykin, have lined up primarily outside during their playing careers. George Pickens was out wide 90% of his time at Georgia.

Fellow Memphis Tiger Anthony Miller has occupied the slot on 79.4% of his career passing snaps in the NFL, and Steven Sims is at around the same rate, 81.1%.

Having invested a fourth-round pick on Austin, there’s a decent chance he will get an opportunity to showcase his slot talents immediately, with a good possibility of being a downfield threat on the outside, as well.