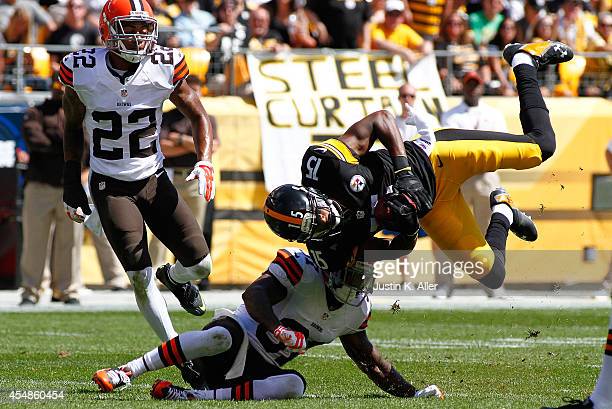 Part five of a series I’ll be exploring over the next several weeks. Kevin Colbert is calling it a career as GM, or de facto GM, of the Pittsburgh Steelers. His career has so much in it, running the team since 2000s. Lots of highs, two Super Bowls added to the trophy case, and the occasional low, but overall, a fantastic career for a – by all accounts – fantastic person.

Another corner miss by the Steelers with Butler. He was only a fifth round pick and certainly wasn’t counted on to change the secondary. Still, he did little to improve it, appearing in four games as a rookie and failing to make the team his sophomore season. He spent the rest of his pro career with five NFL teams and three CFL ones. He’s actually still been in and around the league and was just released by the Toronto Argonauts this April.

Butler could be higher on here, perhaps above the 7th rounders, but he at least made the team and appeared in a couple of games. Still, he recorded just one tackle in his time with Pittsburgh.

Plenty of seventh round picks fail to make the team and ever appear in a game so the fact Herron checked that box, even if he played in just two of them, is something of a notable accomplishment. He carried the ball three times for two yards and a “long” of one so he isn’t exactly the best seventh rounder Colbert’s ever had. But it was something out of him, though he was with a new team later in his rookie season.

The first quarterback Kevin Colbert ever drafted. Instead of Tom Brady, he took Tee Martin. Martin didn’t become the GOAT but he did appear in one game for the Steelers. He never attempted a pass but did have a third down conversion with his legs in a 2001 blowout finale win over the Cleveland Browns. For most fifth rounders, this wouldn’t put him within striking distance of the top 100. But he hung around the roster a bit and for a mid/late-round QB to appear in a game is something so Martin gets the nod at #109.

My favorite fun fact about Martin is all of six his completed NFL passes were to Hall of Famers. Five to Jerry Rice, one to Tim Brown. That has to be a NFL record.

A height/speed upside prospect with a receiver background, the Steelers took a chance on him in the fifth round. He’s listed as officially playing in 16 games in three years with the team but he didn’t do much on the field, finishing his Steelers’ career with just three total tackles. He was released with an injury settlement in August of 2019 and currently plays for the USFL Birmingham team.

Dallas Baker, The Touchdown Maker. One of my favorite nicknames ever. He never found the end zone in the NFL but he did at least catch a pass in Week 10 against the Colts of the 2008 season. A six-yard gain on 2nd and 27 on a failed final drive but it still appears on the box score. He made it through three training camps with the team but was cut at the end of the third in 2009. A third-round pick who hung around for three years isn’t the worst outcome in the world, though.

Still on the roster – for now – his spot on this list remains fluid. But he’s sure not trending in a positive direction. A speedster out of Maryland with a true running back role, he struggled his rookie season in a year heavily adjusted by the pandemic, not to mention McFarland’s inexperience after leaving school early. He entered his sophomore year hopefully to take a leap but the Steelers drafted Najee Harris and McFarland suffered a MCL injury that sidelined him for the first half of the season.

To date, he has just 36 carries at just 3.2 yards per pop. He’s logged barely more than 100 snaps through the first two years and his future with the Steelers is dim.

Brooks was a potential hybrid type coming out of Maryland and got a look in 2021 as a potential slot option. But he suffered an injury and the team waived him. As a rookie, he did get into four games and picked up 29 defensive snaps. He recorded two tackles in Pittsburgh and was recently waived by the Rams after seeing plenty of special teams action last year, earning a Super Bowl ring, though he did not play in The Big Game.

Did you know where Matt Kranchick went to school? Neither did I. He played in six games across two years with the Steelers, serving as a blocker most of the time. He did catch one pass, six yards in a Week 10 win over the Cleveland Browns. He was stopped a yard short of the first down marker and Jeff Reed’s 44-yard field goal was blocked and returned for a Cleveland TD the following play so Kranchick’s lone catch doesn’t come with a good memory.

Brown played with his “hair on fire” as a special teamer but he never materialized as a starting corner. He did carve out a halfway decent role on special teams, appearing in 34 games across three seasons with the team and recording 49 total tackles. But he rarely saw the field defensively and wasn’t successful when he did. A torn ACL mid-way through 2013 virtually ended his career.

Carter was another EDGE rusher who just didn’t feel big enough to play on the perimeter. He started four games for the team but like Clancy, never recorded a sack and became more of a special teamer. He lasted three full seasons with the team, recording 16 total tackles. There’s been better but also far worse when it comes to fifth rounders.

We’ve cracked through the Top 100, moseying on through some fifth rounders on this list. Wallace played for the Steelers for just two years but did at least record 11 tackles over that span. He also notably had a pick-six at the end of a blowout win against the Chiefs in 2006, picking off Brodie Croyle. Click here if you want to watch the play.

One other fun fact. According to PFR, there’s only two players in NFL history with the first name “Rian.” Rian Wallace and Rian Lindell and they played during the same time period. Neat.

Brown was a poor athlete but big receiver out of college and appeared in eight games his sophomore season, catching 12 passes. He didn’t do much with them, averaging only 7.8 yards per catch and no touchdowns. He was waived in December of 2014 and spent the next summer with Buffalo.

He hung around the Steelers’ roster for five years but over that span started just four games, all coming in 2001. The rest of his time was as a backup. In 52 games, Clancy failed to record a sack and recorded only 40 tackles. He found more success in his post-Steelers days and earned two sacks in his first year away from the team in 2005 with the New York Giants. Clancy wins the “well, you were here” award. Congrats.