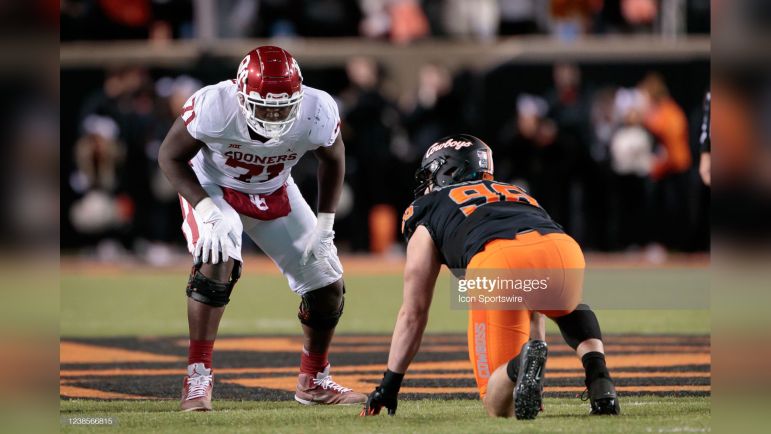 With the 2022 NFL Draft now in the rearview mirror, it is now time, of course, to turn our attention to…the 2023 NFL Draft. Not to rookie minicamp, OTAs, training camp, the preseason, the regular season, or anything ridiculous like that. No, my friends, it’s always draft season.

And several outlets have already posted a preliminary 2023 mock draft, including The Athletic. Joining them is Pro Football Focus, who also submitted their own mock draft for next year, using the Super Bowl betting odds to determine draft order instead of going by the 2022 draft order.

Michael Renner was the man behind the machine on this one, and with the Steelers holding the 11th overall pick (which would be tied for the highest natural first-round pick they’ve held since 2004)—he believes they will go back to the well along the offensive line, drafting tackle Anton Harrison.

“Harrison is an athletic 6-foot-5, 309-pounder who has already shown well in pass protection”, he writes about the Oklahoma prospect, whom they gave a 77.0 overall grade for last season, with a grade of 85.6 in pass protection, noting that the 2021 season was his first year as a full-time starter.

As it stands, the Steelers are set to enter the 2022 season with the same set of tackles as last year, with 2021 fourth-round pick Dan Moore Jr. at left tackle and fifth-year veteran Chukwuma Okorafor at right tackle. Moore started 16 games as a rookie, missing only one game due to injury. Okorafor has started all but two games the past two years.

Okorafor was actually expected to slide from right tackle to left tackle last year, with Zach Banner playing right tackle, but when Banner had a setback with his knee as he worked his way back from a torn ACL, the coaching staff decided to play Moore, with whom they were only comfortable on the left side, just weeks before the regular season was to start. That forced Okorafor back to the right side.

This offseason, with Okorafor an unrestricted free agent, they re-signed him to a three-year contract worth nearly $30 million. Both he and Moore are now under contract for the next three seasons, but that doesn’t mean either one has to be guaranteed a starting job throughout that time.

Pittsburgh added two starters along the offensive interior this offseason via free agency in James Daniels and Mason Cole, hoping that either Kendrick Green or Kevin Dotson can carry over their starting role from last season. But they remain lacking in depth at tackle after releasing Banner.

Joe Haeg is currently the team’s swing tackle, and he even will be a free agent next year. Next in line behind him are Chaz Green and John Leglue, which is not the most comforting thought. One can only hope that they can manage to add another cheap veteran tackle to compete for depth there by training camp.