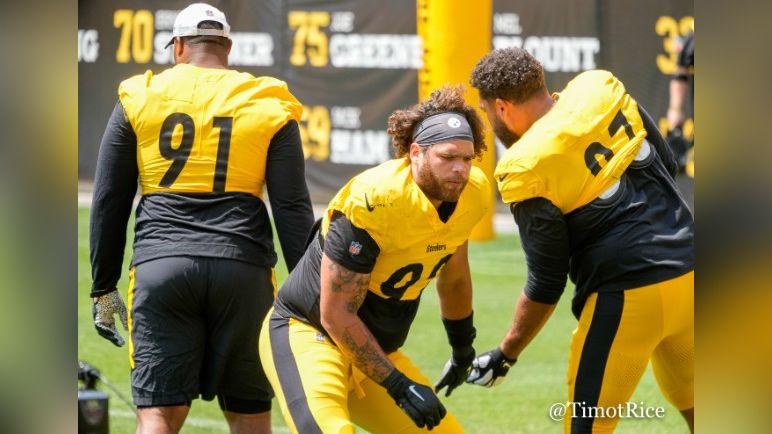 During the media availability session in the locker room once OTAs wrapped up Tuesday afternoon, several media members got to speak with DL Isaiahh Loudermilk. When asked about his relationship with veteran DL Cam Heyward and if it helps having him as a teammate to learn from compared to a coach on a video via Steelers Live, Loudermilk didn’t hold back the praise for his teammate and mentor on the defensive line.

.@iloudermilk111 talks about making improvements to his game in his second year, what he worked on in the offseason and more ⬇️ pic.twitter.com/goQLWd7Hz6

“It helps a lot, you know, especially coming from him,” Loudermilk responded. “He’s been there and done that for a long time, playing at a high level for a long time. Watching him I know that’s how a high-level player works.”

Loudermilk has found himself “in the butter” being an apprentice to Heyward as a rookie and now going into his sophomore season. Heyward has been the model of consistency throughout his 11-year NFL career to date, making five straight Pro Bowls and being named a three-time First Team All-Pro as a defensive lineman, racking up 540 combined tackles, 101 TFLs, and 68 sacks, which includes ten from last season at the age of 32.

Not only does Loudermilk know to pay attention during drills when Heyward demonstrates different techniques, but also understands that when the veteran leader of the team speaks, you listen.

“Anytime he tells me something, I’m going to listen to it for sure,” Loudermilk continues. “Because, you know, he’s an elite defender and always has been. It’s definitely something I don’t take lightly is his words for him.”

Loudermilk was forced into action sooner than expected after Pittsburgh made the decision to trade back into the fifth round to select him in the 2021 NFL Draft. After the selection, it appeared as if Loudermilk would be buried on the depth chart behind Heyward, Tyson Alualu, Stephon Tuitt, Chris Wormley, Isaiah Buggs, and Carlos Davis. However, after injuries suffered to Alualu and Tuitt knocked them out for the season and Buggs/Davis struggled to get anything going, Loudermilk took on a significant role in his rookie year, logging 288 defensive snaps and getting two starts down the stretch as Pittsburgh struggled to have any consistency of play upfront.

“Any kind of advice that I can get from him is helpful,” Loudermilk responded when asked if he watches Heyward coach up other guys in the DL room. “Even if it is someone else, that’s kind of how our whole room takes that approach. If someone is getting coached, you’ll get coached also.”

Hopefully, the Pittsburgh Steelers will be able to have both Alualu and Tuitt return to the lineup this season to improve the overall depth and impact of the defensive line back to where it was in 2020 prior to their injuries. Loudermilk references their experience, along with DE Chris Wormley, as guys that can take on the role of “coach” as well with Heyward for the defensive line.

The Pittsburgh Steelers find themselves with a bunch of developmental pieces in the DL room, having the likes of Loudermilk, DeMarvin Leal, the Davis twins, and even Montravius Adams to an extent developing behind some established vets with proven track records. Much like Heyward referenced in a recent interview on The Mina Kimes Podcast, he merely is paying forward the courtesy given to him by some Steelers’ all-time greats. Hopefully, Loudermilk can continue to play the mentee role as Heyward did all those years ago and eventually become the mentor to future Steelers to continue the tradition that makes the Pittsburgh Steelers one of the best cultures in the National Football League.