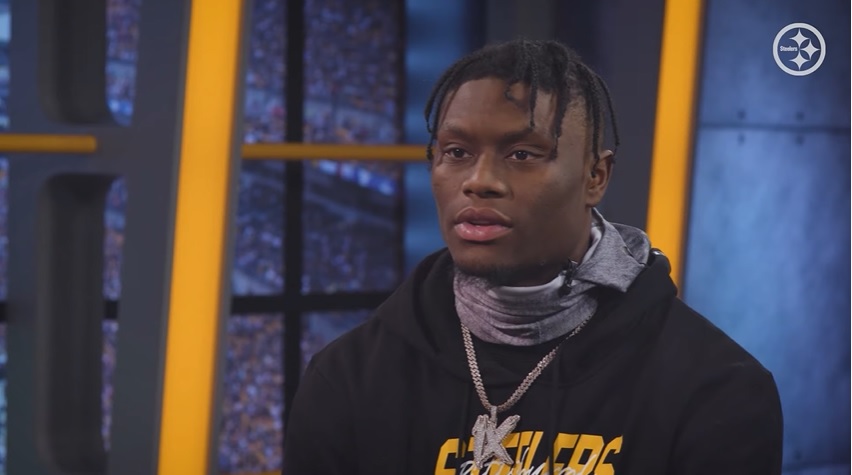 Stepping into a franchise in transition like the Pittsburgh Steelers, rookie quarterback Kenny Pickett and rookie wide receiver George Pickens could find themselves on the field for the black and gold very quickly in 2022.

With a depleted depth chart at receiver for the Steelers following the losses of JuJu Smith-Schuster, Ray-Ray McCloud, and James Washington in free agency, Pickens steps into an ideal situation in Pittsburgh at receiver with a chance to carve out a starting role right away.

Along with Pickens, Kenny Pickett has a chance to step into the starting role in 2022 as well after the Steelers saw Ben Roethlisberger retire after 18 years, and the Steelers attempt to shore up the quarterback room with the signing of veteran Mitch Trubisky in free agency. As the draft class’s most pro-ready quarterback coming out of the University of Pittsburgh, Pickett will have a shot at competing for the starting job right away.

Knowing that both Steelers’ rookies could have prominent roles in 2022, CBS Sports’ Chris Trapasso believes that both are firmly inside the top 10 of NFL Offensive Rookie of the Year candidates across the league.

Current Offensive Rookie of the Year favorites at https://t.co/gtFBhqQFdO

Trapasso slots in Pickens at No. 9 in the power rankings for OROY candidates.

“Pickens may have to scrape rust from his game, seeing as though he only played in four games in 2021. Once the final piece of rust hits the turf, the second-round wideout can be one of the most threatening young outside receivers in football,” Trapasso writes. “He’s tall, twitchy, plays through physicality with ease and has a catch radius comparable to Chase Claypool’s.

“Now, the murky quarterback situation in Pittsburgh could slow things for Pickens, but that should work itself out while he’s getting his feet back under him after his March 2021 injury. Perfect,” Trapasso added. “The Steelers have less than 25% of their 2021 targets available this season, and Diontae Johnson and Claypool will garner their fair share of looks. But Pickens is that naturally talented to begin as the No. 3 with the Steelers but finish the season with some OROY consideration. I mean, let’s not forget how incredible Pittsburgh’s track record is with non-first-round receivers.”

You’d be hard-pressed to find better situations to step into in the NFL for a rookie receiver than Pittsburgh and Pickens. Of course, some other high-profile names like New York’s Garrett Wilson, New Orleans’s Chris Olave, and Atlanta’s Drake London will likely see more targets overall, but Pickens steps into a situation with more experienced receivers around him, which should lead to a ton of single coverage overall for the fast, physical rookie receiver.

As for Pickett, being a quarterback and stepping into a high-profile situation like Pittsburgh has the former Panthers’ star sitting at No. 3 in Trapasso’s power rankings for OROY candidates, just behind Tennessee Titans’ wide receiver Treylon Burks at No. 2, and Kansas City Chiefs’ wide receiver Skyy Moore at No. 1.

“Three of the last six and six of the last 12 OROYs have been quarterbacks. So if you’re into straight-forward probabilities, flip a coin. If it lands heads, take Pickett as the award winner. Standing in Pickett’s way initially is the presence of veterans Mitchell Trubisky and Mason Rudolph,” Trapasso writes regarding Pickett’s candidacy. “Shouldn’t be challenging hurdles to clear, right?

“Probably not, but the team was quick to sign Trubisky at the start of free agency, and Rudolph has been in the Steelers organization since 2018 and is on his second contract with the team. Either way, if Pickett starts by, say, mid-October — and Week 1 is not out of the question — he’ll have ample time to generate enough buzz to be a OROY candidate.”

Like Trapasso points out, six of the last 12 OROYs have been quarterbacks, which gives Pickett a leg up entirely, especially considering he’s the one out of the 2022 NFL Draft class that should see the field first, and should be on the best team overall, hopefully leading to some individual success.

Of course, he has to show it on the field, but there’s a good chance at the end of the 2022 NFL regular season that Pittsburgh’s Kenny Pickett brings home the NFL’s Offensive Rookie of the Year, much like Roethlisberger did in 2004.