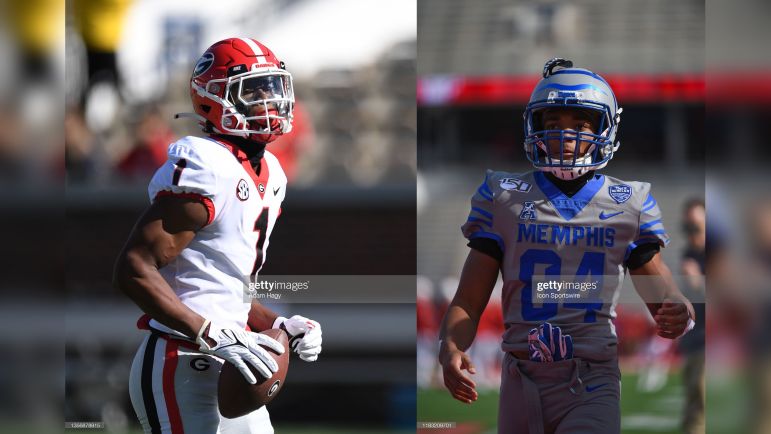 Continuing with the third article of the series, I wanted to look at and provide more context for the position with the 2020 college football season using Sports Info Solutions (SIS). Similar to the last study, I’m focusing on players selected in the 2022 NFL draft, and a few players were excluded due to SIS not tracking smaller school players. This time around I’ll key in on players with larger sample sizes as well. The goal for today is to see how George Pickens and Calvin Austin III stacked up to their peers in the 2020 season. 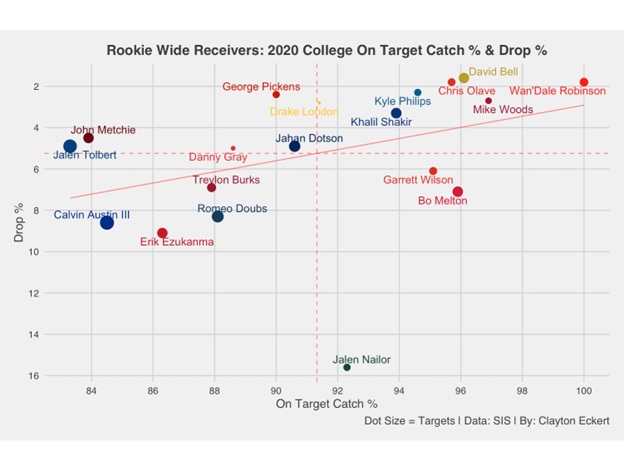 Right away, we can see a high number (eight) of the 19 qualifying players with a strong drop percentage, which is impressive considering only five out of the 22 players from my last study accomplished this feat. Pickens was one of these players in 2020, an encouraging aspect to what he can hopefully continue in a Steelers uniform. The qualifying players also fared well in on target catch percentage overall, and while Pickens was below the mean, he was one of 12 players above 90%.

Austin III landed below the mean in both data points, with the third lowest on target catch percentage (though a slightly better mark than 2021). This was my main concern from the last study, and was no different in 2020. With the amount of sample size on Austin III, and with the challenge of the jump to the NFL, it seems vital for Pittsburgh to utilize and maximize his skillset as a separator and route runner to hopefully set him up with ideal opportunities as a rookie.  Austin III also had the third worst drop percentage of 8.6, with the encouraging takeaway being his improved mark of over three percentage points (5.3% in 2021).

Next let’s look at yards per route run (total receiving yards/number of routes run excluding RPO handoffs) and yards per target (receiving yards per pass attempt in which the receiver is targeted, including incompletions) to get an idea of how the wide receivers were utilized: 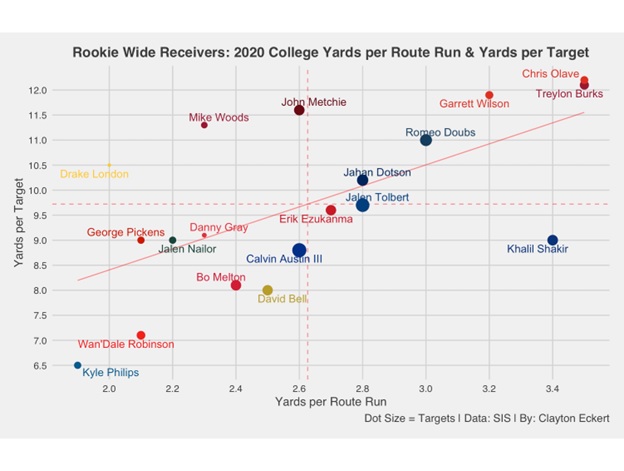 Both Steelers rookie wide receivers landed below the mean in each data point. Austin III was near the mean in yards per route run but had the fifth lowest yards per target just shy of nine. Each of these stats were improved upon on last season, encouraging context especially in regards to his yards per route run (3.1) which would have landed him top five on the above graph.

Interesting results for Pickens, who has the reputation of a downfield target but tied for the third lowest yards per route run in 2020. He had a slightly better result than Austin at nine yards per target. It is important to note that this is more of a total view, so let’s further examine wide receiver usage with average depth of target (average distance downfield that the targeted throws traveled, excluding spikes and throwaways) and average depth of completion to zero in on opportunities more in the receiver’s control: 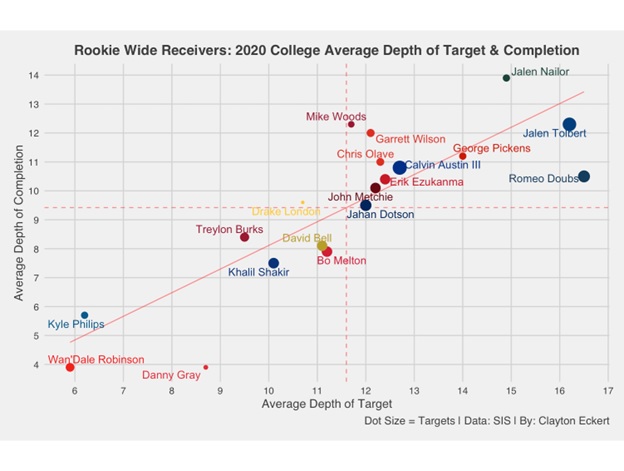 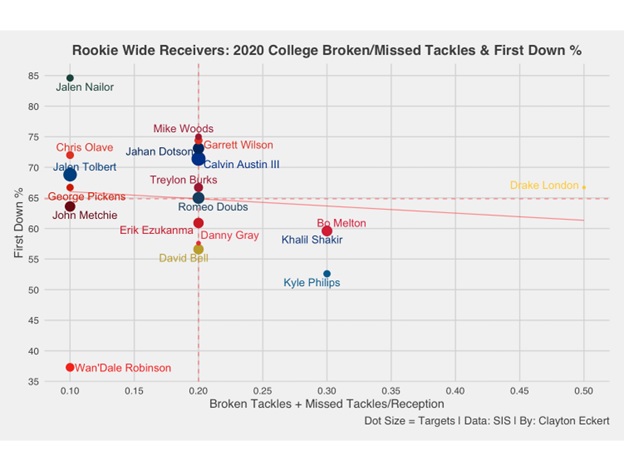 USC’s Drake London (Falcons) was far and away provided the best broken tackle + missed tackle result ‘breaking the graph’. Austin III matched his 2021 result with an even better first down percentage above 70% which ranked sixth  (compared to 63.5 last season). Hopefully he can trend more toward his 2020 value for Pittsburgh, with the data in his final two seasons giving me optimism. Pickens landed in the bottom tier in the broken + missed tackle stat, and more encouragingly landed above the mean in first down percentage along with Austin III. Here’s to hoping the two can aid the 2022 Steelers offense to more sustained drives than recent memory.

Here is a similar view to the first study, viewing the wide receivers completed air yard percentage (CAY% = completed air yards/intended air yards) to gain context of opportunity and connectivity along with a and yards after catch percentage (YAC% = yards after catch/total yards) to see what wide receivers created once the ball was in their hands. This gives us great context of what the players provided for their team and how they were used, along with seeing who fared better in their final season: 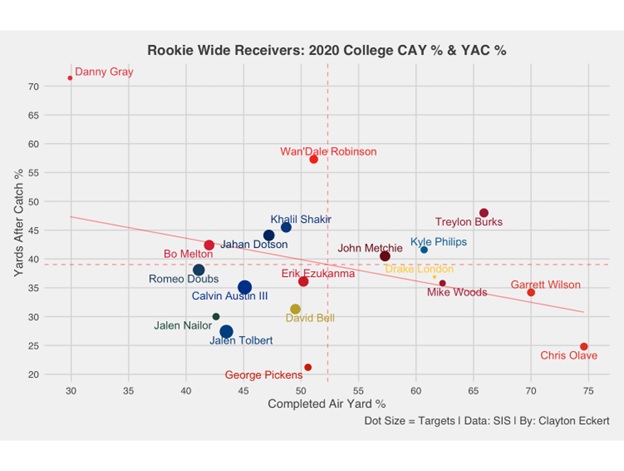 As I highlighted in the first article, Pickens had the lowest YAC% and a top five CAY% rank in the study. Viewing 2020 alone, we can see the YAC result holds true while his CAY% was below the mean but above 50%. So even though 2021 was limited, the opportunities he did have boosted his results to nearly 60%. Austin III landed below the mean in both data points, with a slightly better CAY% than last season but a much lower YAC%. The encouraging aspect was his improvement last season with a result over 10 percentage points higher. This aspect to his game that will likely need to continue for NFL success, and our own Jonathan Heitritter did a great job highlighting his abilities in this great article. 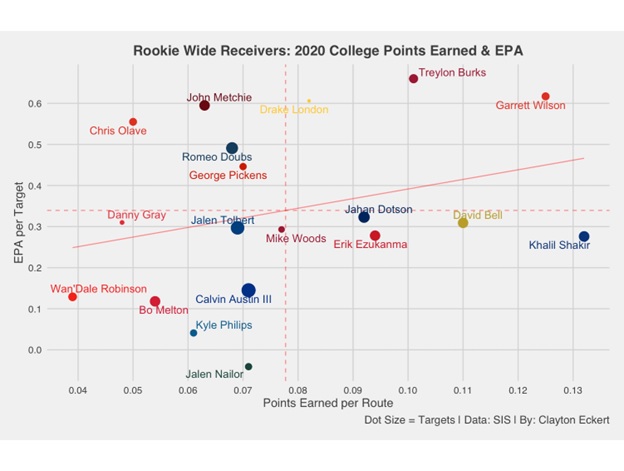 The players that have strong results in both data points are Ohio State’s Garrett Wilson (Jets) and Arkansas’ Treylon Burks (Titans), who both fared very well last season as well. Pickens fared better in the EPA per target data point, with the seventh rank. His points earned per route result was below the mean and clumped with many players that includes Austin III, who was below the mean in both stats in 2020 with an improved points earned per route result last season.

Through the studies thus far, Pickens fared best in drop percentage, CAY%, average depth of target and completion, on target catch percentage, first down percentage, and EPA per target. His lower marks were YAC%, yards per route run and yards per target, broken + missed tackles per reception, and points earned per route. On the whole, the pros outweigh the cons in my opinion in his final two college seasons, providing great value especially in CAY%, depth of target/completion, and EPA.

In 2020, Austin III fared best in average depth of target and completion, broken + missed tackles per reception, and first down percentage. He had lower marks in drop percentage, on target catch percentage, yards per route run and target, CAY and YAC%, points earned per route, and EPA per target. Encouragingly, improvements were made last season in drop percentage, yards per route run, and points earned per route. So the areas of concern in each of Austin III final two seasons were yards per target, CAY%, EPA per target, and most importantly on target catch percentage.

Throughout the rest of the offseason, I will dive deeper into the data as we continue to learn about the newest Pittsburgh Steelers. How do you think George Pickens and Calvin Austin III will fare in their rookie year? What are some of your takeaways across the league? Thanks for reading and let me know your thoughts in the comments!