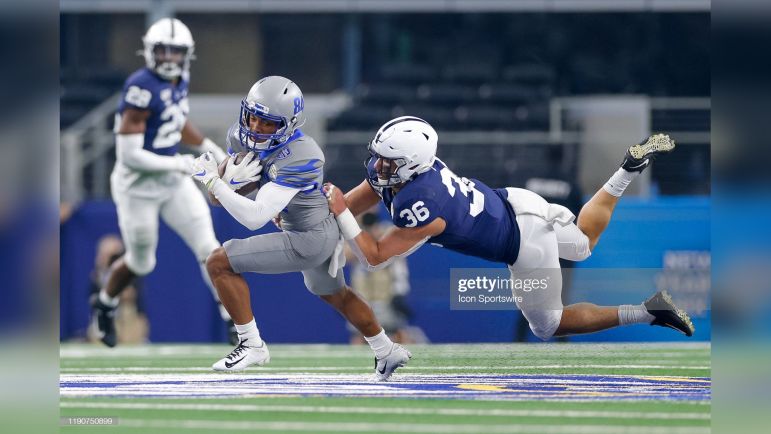 To start out the final day of draft weekend, the Pittsburgh Steelers selected Memphis WR Calvin Austin III with the 138th pick of the 2022 NFL Draft. The selection of Austin came as a bit of a surprise given the fact that they had already selected a WR, Georgia’s George Pickens in the second round at #52 overall. However, as the great Dave Bryan along with other Steelers fans out there, there was a hope that Pittsburgh would potentially double dip at the position, drafting more of a prototypical outside WR that could stretch the field along with a receiver that projects more inside at the slot.

Pittsburgh accomplished this task, nabbing Pickens, and Austin and at great values given their respective draft spots. While Austin, standing 5’7 6/8”, 170lb projects more as a traditional slot WR at the next level, he showed the ability to line up both inside and outside during his time at Memphis, making him a potential chess piece to utilize at different spots in offensive formations to get advantageous matchups. That shouldn’t be hard for a player Austin who possesses elite speed and acceleration, having run a 4.32 40 at the NFL Combine along with posting a 39” vert and 11’1” broad which highlight his explosiveness. He also was recruited to Memphis as a track star and ran for the Tigers while at college.

The speed makes Austin the YAC daddy Dave and many others has been clamoring for since the days of Mike Wallace and Martavis Bryant, having the speed and burst to catch short and run long which has been often referenced as a goal for the Steelers offense. As a former 2x Tennessee state champion in 100m, 200m, and 400m in high school, Austin possesses that angle-breaking speed that to take any short reception to the house. For example, check out this paly Austin makes a slant over the middle of the field after getting an inside release and hits the jets to pull away from the defense for the house call.

Fellow site contributor Clayton Eckert did me a solid and sent me his data study on Austin as well as other WRs in this draft class that will be going up soon, and I strongly encourage you to read. In the study, he highlights Austin’s YAC ability thanks to his impressive track speed and knack for creating after the catch as a runner as stated below:

The stronger result for Austin III last season was YAC%, with a healthy improvement from 2020 of over 10% that I highlighted in the first study. Looking at the 2021 results above, he ranked 10th amongst his peers which continues to give more total context to creating with the ball in his hands as mentioned earlier. He had similar Completed Air Yard % in each of the last two seasons, which is the other side of the coin with him ranking towards the bottom of my studies thus far.

Former Steelers OC Randy Fichtner would be in heaven scheming up plays for Austin and his often-coined phase “catch short, run long.” Not only does Austin have the juice to take it to the house on nearly any play, but he also has good vision and awareness as a runner, following his blocks along with having a stronger frame than his listed size suggests to run through arm tackles on occasion. Here’s an example from the same game against Arkansas State where Austin catches the ball on a simple drag route and runs by two arm tackle attempts, getting up the right sideline where he says “see ya” to those in pursuit for the score.

Despite going in the fourth round, Austin’s impact on the game cannot go understated. Former Cincinnati CB and #4 overall pick Sauce Gardner by the New York Jets called Austin one of the most difficult matchups he had during his college career, saying “He’s a smaller guy, but he ran like a 10.3, 10.4 100-meter, runs like a 4.3”.

Even though Gardner is a good athlete in his own right, his long, lanky frame tends to present problems for defensive backs when tasked with covering shorter, quicker WRs like Austin. Here is one play where Austin got the best of Sauce back in 2020, running another short drag route and runs past Sauce with ease and turns up the sideline, burning the angle by the safety before stepping out of bounds after a 40+ yard completion.

While Austin is by far more of a traditional WR than the likes of Chris Rainey and Dri Archer who Pittsburgh selected in the past as undersized speed demons, Austin has shown the propensity to be handed the football on jet sweeps, having eight carries for 169 yards and three TDs during his career. As he developed more as a WR to start his career, Austin got more run as a jet motion guy like we see on this handoff he takes up the left sideline, evading a tackle and weaves through multiple defenders till he gets into open grass, managing to just outrun the angle by the defender at the goal-line for the 83-yard TD.

Still, Austin’s uptick in usage as a receiver didn’t eliminate his usage or limit his effectiveness as a rusher, still being a threat to rip off a long one any time he touched the ball. Watch Austin get the rock on this called reverse play against Navy, allowing his blockers to pick up defenders as he waits for a hole to open and somehow manages to burst through the narrowest of gaps, watching multiple defenders just miss the tackle as he accelerates in the open field, picking up one final block to secure the 69-yard TD.

Overall, the addition of Austin to the receiving core in Pittsburgh injects some much-needed speed and opportunity for YAC that the offense has sorely missed in recent years. He has shown that he can catch a short pass and take it the distance as well as take a handoff in the backfield and burn angles of pursuit for an explosive play. Sure, he needs to continue to develop as a route runner and learn how to generate more consistent separation, but Austin possesses the athletic traits of elite speed and burst that you just can’t teach, making him a potential contributor to the offense at least in some facet in Year One.

When watching Austin, I saw similar traits to that of former Kansas State WR and current Seattle Seahawk Tyler Lockett. Lockett himself was a former fourth-round selection back in 2015 and shares a similar frame (5’9 7/8”, 183lb) and athletic profile (4.40 40, 35 1/2” vert, 10’1” broad) as Austin. Lockett is the more refined route runner and Austin is the more explosive athlete, but both players project as undersized WRs that can line up inside and outside, having the ability to both get behind the defense for deep shots as well as create after the catch.

Lockett averaged 16.1 YPR last season and has averaged nearly 300 yards of YAC for his NFL career according to Pro Football Reference, suggesting that he can create after the catch much like Austin. Both players have a return background in college and Lockett took a while to make an impact as a WR at the NFL level, not having his first 1,000-yard season until 2019. Personally, I see Austin having a similar path of development to Lockett, starting out as a rotational receiver that can stretch defenses and create after the catch close to the LOS while possibly contributing as a returner before earning more of a role as a potential starting WR.

The athletic traits, receiving talent, and continual uptick in development are there for Austin to become a quality WR in the league. While he will need to overcome his lack of ideal size and become a more nuanced route runner, his big-play ability and threat for serious YAC should help him see the field sooner rather than later for the Steelers revamped offense.

What are your thoughts on Calvin Austin III? Do you see him being a similar threat in the league in terms of generating YAC? Do you think his speed and athleticism will help him see the field quickly in Year One? Please leave your thoughts in the comments section and thanks again for reading!