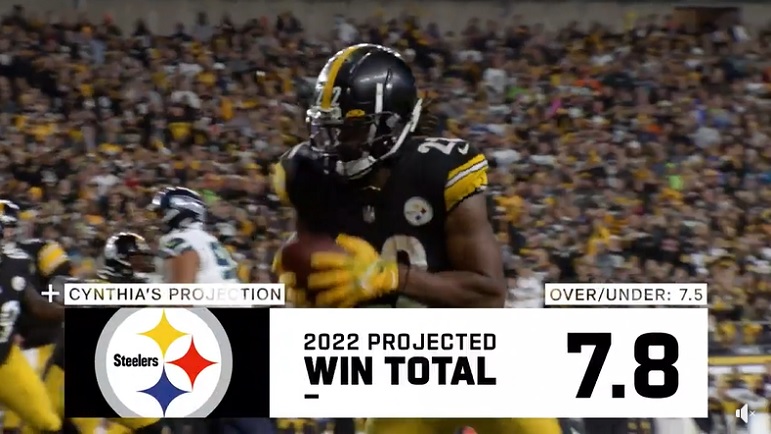 Few love numbers more than NFL.com analyst Cynthia Frelund. 24 hours before the release of the 2022 schedule, which always brings win totals and projections, Frelund is offering her win total projections for each team. When it comes to the Pittsburgh Steelers, she projects the team to win 7.8 games in 2022, as you can tell in the photo at the top of the article.

That 7-8 win total range has been about the norm for the Steelers this offseason, their first year without Ben Roethlisberger since 2004. They’re playing in a highly competitive AFC North, teams with established quarterbacks like Joe Burrow, Lamar Jackson, and Deshaun Watson. Watson could face a NFL suspension, but with his legal cases being pushed back until 2023, he may not serve anything this year. The Steelers will have to hope Mitch Trubisky or Kenny Pickett is able to keep the offense’s head above water and that Pickett, if he plays, begins to emerge as the team’s next franchise guy.

Pittsburgh will have to win through its run game and defense. An improved offensive line should help Najee Harris in year two, who ran well as a rookie but rarely had much room to work with. Similar to last year, the Steelers’ defense will need to keep scores down and win games in the 20-17 variety as opposed to 31-30 type of shootouts. Pittsburgh’s defense looks stronger this year with a healthier and better defensive line, along with a stronger off-ball group that includes Myles Jack.

Rounding down to the nearest win in Frelund’s projections, that’d put the Steelers at 7-10 this season. It’d be – in case you haven’t heard – Mike Tomlin’s first losing season and the team’s worst finish since going 6-10 in 2003. That year, Pittsburgh beat Baltimore in Week 1, but dropped six of their next seven and limped to the finish line.

Freulnd calls games against the Raiders, Eagles, and Buccaneers the team’s three “must-watch” contests of the year.

We’ll find out tomorrow night exactly how the Steelers’ schedule will shake out, though we’ve known the Steelers’ opponents since the end of the 2021 season. As Dave Bryan wrote about after last year, here are the home/away games for the 2022 season.

That comes out to the 12th-hardest strength of schedule this year. Pittsburgh will have the benefit of traveling the fewest miles of any team this season, never even leaving the Eastern Time Zone, but these conversations are typical offseason fodder that’s quickly forgotten about as the season draws near.

According to her projections, the Ravens have the highest divisional win total. Here’s how she stacks the AFC North: