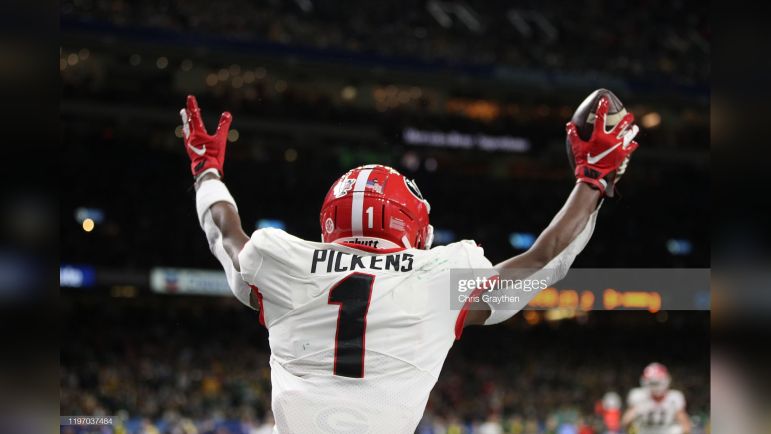 Turns out, getting a first-round caliber wide receiver in middle of the second round of the 2022 NFL Draft is great value overall.

That’s exactly what the Pittsburgh Steelers did with former Georgia star George Pickens, who came off the board at No. 52 overall to the Steelers coming off of a season in which he tore his right ACL in March 2021 and then returned for the final four games of the Bulldogs’ National Championship run.

“Pickens has WR1 capabilities. He just barely played in 2021 due to a March 2021 torn ACL, and there were some maturity concerns before the draft,” Trapasso writes. “At close to 6-3 with sub 4.50 speed and an enormous catch radius that pairs awesomely with twitchy routes, Pickens is going to be another Day 2 star at receiver in Pittsburgh. Because he may be a little rusty on the field, it’s perfect scenario to initially have Chase Claypool and Diontae Johnson ahead of him on the depth chart to begin his career.”

It’s hard to find any reason whatsoever to be disappointed or down on the selection of Pickens overall.

At 6-3, 195 pounds, Pickens brings significant physicality to the position as a blocker and in contested catch situations, has great hands overall (just a 2.2% drop rate in college) and is already a relatively fluid route runner overall. That said, he played in just 24 career games in college.

He’s still relatively raw overall from the position standpoint and needs to fully develop an NFL route tree, but there’s just so much to like already with Pickens coming out of a major program like Georgia.

Having guys like Diontae Johnson and Chase Claypool ahead of him on the depth chart will help him develop at the right pace in the NFL, whether that’s initially on the boundary as an X or Z, or in the slot overall where there appears to be more of a fit on the roster as is.

There’s no doubt though that — at least on paper — the Steelers hit a home run with the selection of Pickens at No. 52 overall.