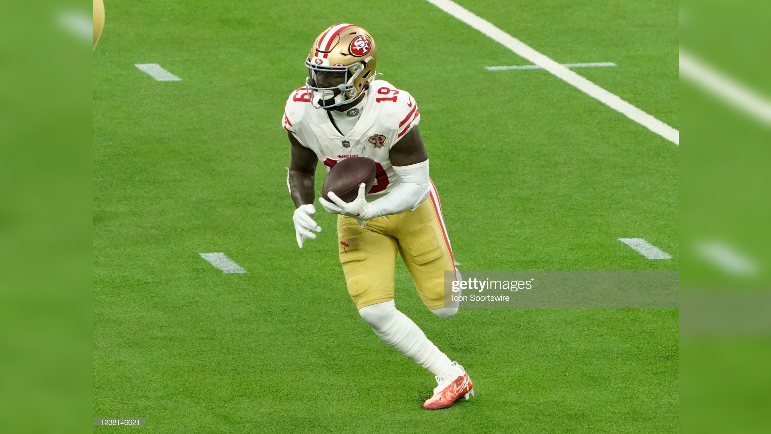 With news of San Francisco 49ers’ star wide receiver Deebo Samuel wanting out of Silicon Valley, a number of teams across the NFL continue to get thrown out as potential landing spots for the All-Pro offensive playmaker.

Though the dispute with the 49ers has little to do with money and much to do with his usage as a receiver and running back hybrid, there are plenty of teams in the NFL landscape that would do quite a bit to ensure they land the star in a trade.

"From my understanding Deebo Samuel basically told the 49ers I want to be traded & don't make an offer.. I don't think this is about the money" ~@RapSheet#PMSLive pic.twitter.com/V6Nc0Vwveu

One of those teams that might not be keen to jump into that mix is the Pittsburgh Steelers, who have their own wide receiver contract situation going on with fourth-year receiver Diontae Johnson. That didn’t stop NFL.com’s Kevin Patra from listing the Steelers as one of 10 potential landing spots for the 49ers’ star in a trade.

“At the dawn of the post-Ben Roethlisberger era, what better way to bolster Mitchell Trubisky (or a rookie QB) than by adding a receiver who can get hidden yardage after the catch,” Patra writes. “Pittsburgh doesn’t traditionally make splashes on offense, but as we get into a new era of Steelers football, snagging Deebo would immediately keep Mike Tomlin’s club a contender. Samuel and Diontae Johnson would be a dangerous duo for any defense, simultaneously buffering the next full-time signal-caller.”

Sure, on paper it makes a ton of sense as the Steelers need a guy that can create after the catch and pick up the tough yardage that JuJu Smith-Schuster once did with the football in his hands. But, as Patra writes, the Steelers rarely make splashes like this, and won’t start now with Samuel, who will need a hefty contract extension this season, as well, in the range of Tyreek Hill’s with Miami.
Of course, getting a guy of Samuel’s skillset would certainly bolster the Steelers’ attack under second-year coordinator Matt Canada, but assuming the draft capital required, along with the financial commitment the Steelers would have to make at the wide receiver position, it’s a tough sell overall.
Aside from the Steelers, four other teams in the AFC were listed as potential landing spots for Samuel, including the New York Jets, Indianapolis Colts, New England Patriots, and Kansas City Chiefs.