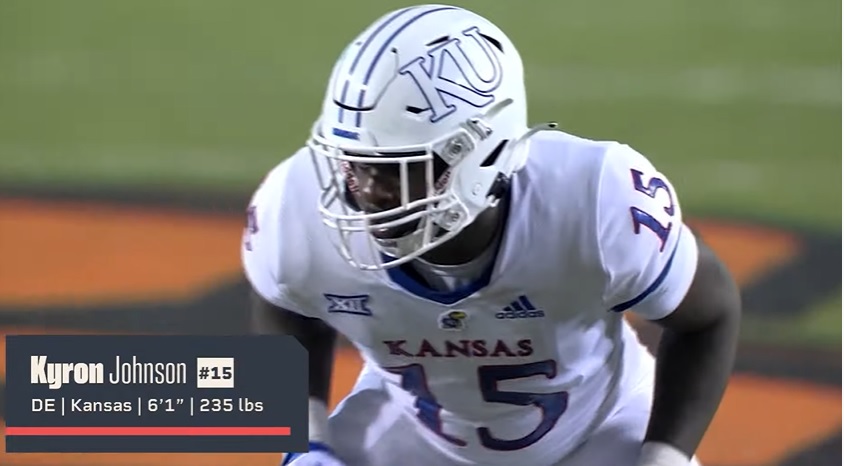 One very late piece of Pittsburgh Steelers’ draft info for you today, though it’s information that won’t be relevant for today’s Top 32. Kansas EDGE Kyron Johnson was brought in for a pre-draft visit, as confirmed in this feature piece yesterday from KUSports.com.

The article lists off the teams Johnson met with during the pre-draft process, the Steelers being one of them. Johnson even talked about meeting Steelers’ ILB coach Jerry Olsavsky.

“The Steelers’ linebackers coach, Jerry Olsavsky, had Johnson walk him through plays on video, and Johnson said he believed Olsavsky was impressed by his knowledge.

‘They just wanted to see if I could retain information in the little short time that I had with them and see if I can call it out based on watching their film,’ Johnson said.”

Johnson was one of the draft’s biggest Combine snubs. A highly athletic pass rusher, he set a career high with 6.5 sacks in 2021 for the Jayhawks. He was a key reason for why Kansas upset Texas, recording two sacks and two forced fumbles in the victory

Johnson had a fantastic Pro Day workout, running a 4.40 at 6003, 231 pounds. He showed explosiveness with a 39.5 inch vertical, 10’0″ broad and a 6.98 three-cone. All excellent numbers that led to a high RAS score, a rock solid 8.43 that was only hurt by his smaller and thinner frame. Johnson participated in this year’s Senior Bowl and had a good showing. Pittsburgh sent scouting intern Fawwaz Izzuddin to the Jayhawks’ Pro Day.

He is viewed as a later Day Three pick but could go higher than some of those analysts believe. In our seven-round mock, we pegged him as a late sixth-round pick going #204 to the Tennessee Titans. Pittsburgh could look for more EDGE help behind TJ Watt and Alex Highsmith, only adding veteran Genard Avery this offseason.