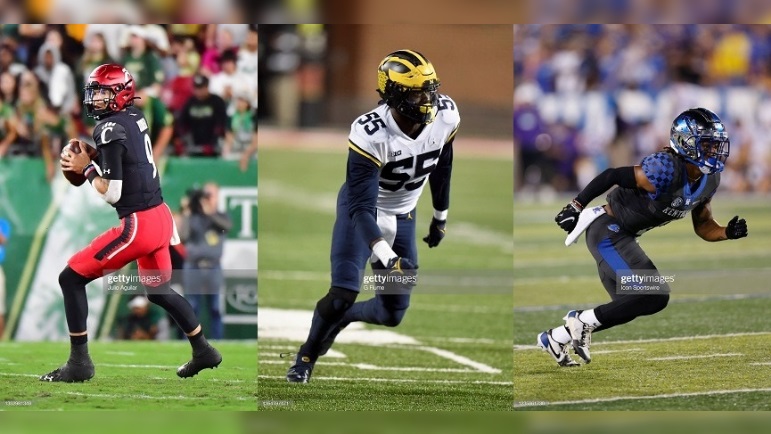 The 2022 Pro Days are now behind us, and the 2021 NFL Draft is three weeks days away, as well. This obviously means the 2022 mock draft season is in full swing and Chad Reuter of NFL.com is the latest to release one on the major media level, and it is four-round offering, at that.

In the first round of his four-rounder, Reuter has the Pittsburgh Steelers selecting Cincinnati quarterback Desmond Ridder at 12th overall following a trade up with the Minnesota Vikings. Below is what he wrote about Ridder and his reason for trading up and then mocking him to the Steelers.

“GM Kevin Colbert was willing to give up second- and third-round picks to move up 10 spots to No. 10 overall for linebacker Devin Bush in 2019. So, it’s not a stretch to think he would give up a future first- and third-rounder (equivalent value to those aforementioned current-year selections) for a quarterback with maturity, poise and striding open-field speed like Ridder.”

By now, most of you should be very familiar with Ridder, who measures in at 6033, 211 pounds with 10-inch hands. At Cincinnati, Ridder completed 810 of his 1,304 total pass attempts for 10,239 yards with 87 touchdowns and 28 interceptions. He also ran 501 times for 2,180 yards and 28 touchdowns during his college career. Upon entering the NFL biggest knock on Ridder is his accuracy. Ridder, by the way, is the fourth quarterback off the board in this mock by Reuter.

In the second round, Reuter has the Steelers selecting Michigan edge rusher David Ojabo at 52nd overall. Ojabo, who suffered a torn left Achilles while performing drills at his March Pro Day, now faces a rehab process that will cut into his NFL rookie season. He measured in at the scouting combine at 6040, 250 pounds with 33 1/2-inch arms and 9-inch hands. He ran his 40-yard dash in 4.55 seconds, posted a vertical jump of 35 inches, and a board jump of 10’2″. He also ran the 3-cone drill in 4.45 seconds. At Michigan, Ojabo registered 36 total tackles with 12 resulting in lost yardage. He also had 11 total sacks, three passes defensed, and five forced fumbles in the 20 games that he played in.

In the third round of his most recent mock draft, Reuter has the Steelers selecting Kentucky wide receiver Wan’Dale Robinson with the 84th overall pick. Robinson, who measure in that combine at 5080, 178 pounds, ran his 40-yard dash in 4.44 seconds and posted a short shuttle time of 4.13 seconds at his Pro Day. He did 19 reps on the bench at his Pro Day and posted a vertical jump of 35 inches to go along with a broad jump of 9’10”. For his college career, Robinson, who played two seasons at Nebraska prior to transferring to Kentucky, registered 195 receptions for 2,248 yards and 10 touchdowns. He also totaled 691 yards rushing and four more touchdowns on his 141 total carries over three seasons.

To close out his mock, Reuter has the Steelers selecting Baylor cornerback Kalon Barnes in the fourth round with the 138th overall selection. Barnes, who measured in at the combine at 5114, 183 pounds with 31 3/4-inch arms and 9 7/8-inch hands, ran his 40-yard dash in 4.23 seconds. At his Pro Day, Barnes ran the short shuttle in 4.58 seconds and 3-cone time of 7.44 seconds. He posted a 40-inch vertical jump to go along with a broad jump of 11’1″ In his four seasons at Baylor, Barnes registered 60 total tackles, three interceptions, 14 passes defensed, and one forced fumble. While he played in 41 total games at Baylor, he only started 16 of those, with 10 coming in his final 2021 season.

Overall, not bad effort from Reuter. Personally, I don’t think the Steelers will need to, or should, trade up to get Ridder, but I understand why Reuter went that way with three quarterbacks already off the board. As for Ojabo, it would be touch seeing the Steelers spend a second-round selection on a player with a fresh Achilles injury that only played in 20 total games in college. Maybe Ojabo will slide a few rounds lower because of his injury and the Steelers take him in the fourth.

As for Robinson and Barnes, they both fit needs for the Steelers. Robinson would, however, become the shortest wide receiver ever drafted by Steelers general manager Kevin Colbert, should he ultimately be the selection. Barnes, on the other hand, is a fit for the Steelers no matter how you slice it.