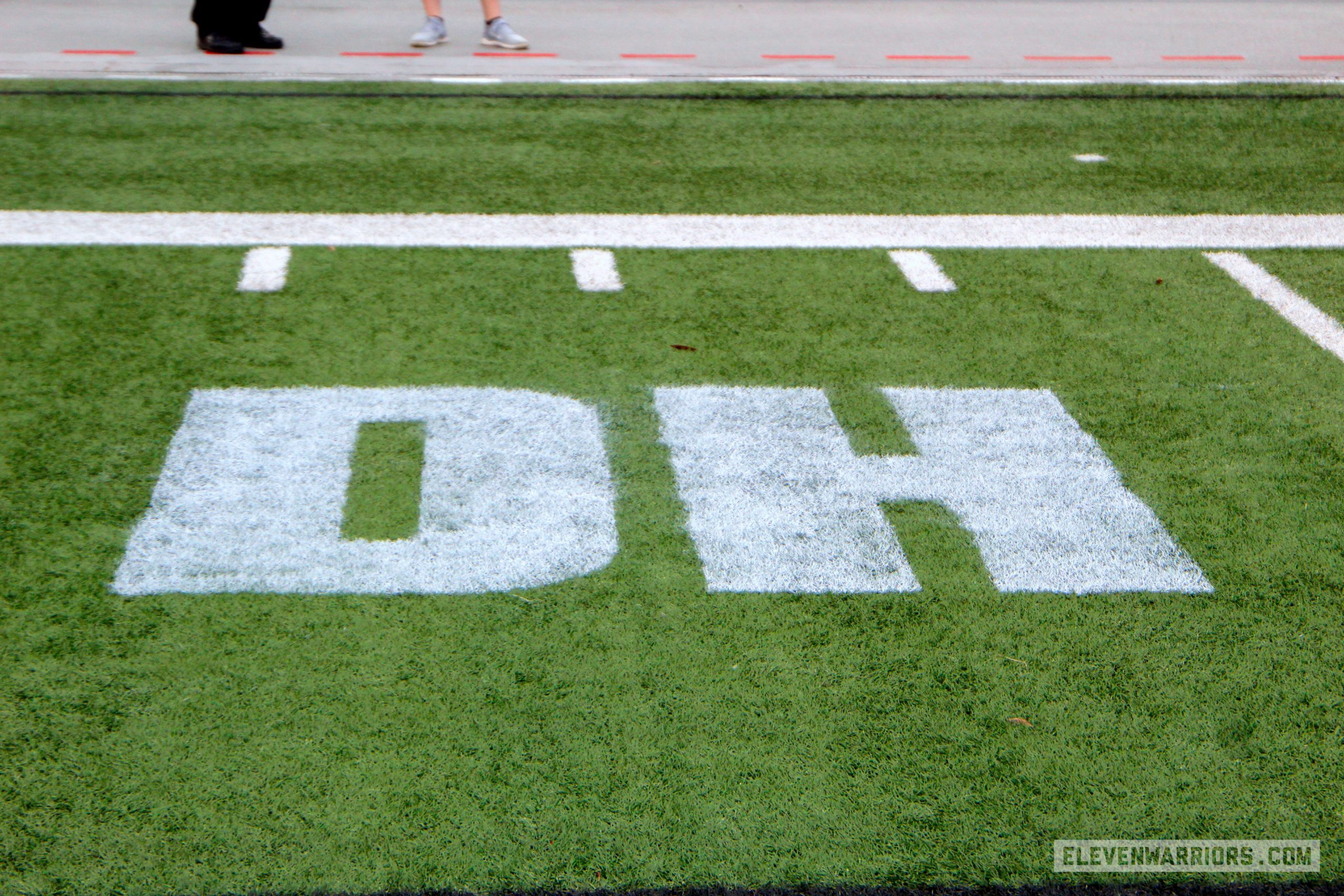 Earlier in the week, we passed along word that Ohio State would honor former QB Dwayne Haskins during today’s spring game, one week after Haskins’ tragic death on a Florida highway. At the time, Buckeyes’ head coach Ryan Day wasn’t sure of the school’s plans to honor Haskins. Now, we know.

Ohio State has painted “DH” initials on their field near the south end zone in Haskins’ memory, according to this tweet shared from Eleven Warriors’ reporter Garrick Hodge, who snapped this image a short time ago.

Ohio State is honoring Dwayne Haskins for the spring game by painting his initials on the field near the south end zone. pic.twitter.com/9KaDWQCNT6

Each player also has a “DH” decal on the back of their helmet, as shown by this tweet from Griffin Strom.

DH decal on the Buckeyes’ helmets for Dwayne Haskins: pic.twitter.com/Ry21PLJybf

Quarterback C.J. Stroud is also wearing a Haskins jersey in his honor.

A video tribute for Haskins will also reportedly be playing during today’s game.

Haskins was killed after being hit by a dump truck while attempting to cross a Florida highway last Saturday morning. Details of the incident are still under investigation.

Out of high school, Haskins initially committed to Maryland but switched to Ohio State after the Terps underwent a coaching change. Haskins would become the Buckeyes’ starter in 2018 and had one of the best seasons in the school’s history. He threw for 50 touchdowns to just eight interceptions while completing exactly 70% of his passes as he led Ohio State to a 13-1 record.

His season included key wins over #9 Penn State, throwing three touchdowns in the victory, including the game-winner to WR K.J. Hill in the game’s final minutes as part of the team’s 12-point, fourth quarter comeback. Ohio State blew out #24 Michigan State 26-6, with Haskins throwing a one-yard TD for the game’s opening points. His best performance came in an upset win over #4 Michigan, throwing six touchdowns in a 62-39 beatdown of the Wolverines. Finally, Haskins led the Buckeyes to Rose Bowl victory with a three-touchdown showing to defeat Washington 28-23. All three of his scores came in the first half as Ohio State built an early lead.

Haskins finished that year third in Heisman voting, and parlayed that into becoming the 15th overall pick of the 2019 NFL Draft. He signed with Pittsburgh after the 2020 season ended and spent the 2021 year as the team’s #3 quarterback.

Memorial services for Haskins will be held this upcoming week on April 22nd, 23rd, and 24th in Pittsburgh, New Jersey, and Maryland, respectively.

Moment of silence before the Spring Game for Dwayne Haskins. pic.twitter.com/M91nkpuSVc