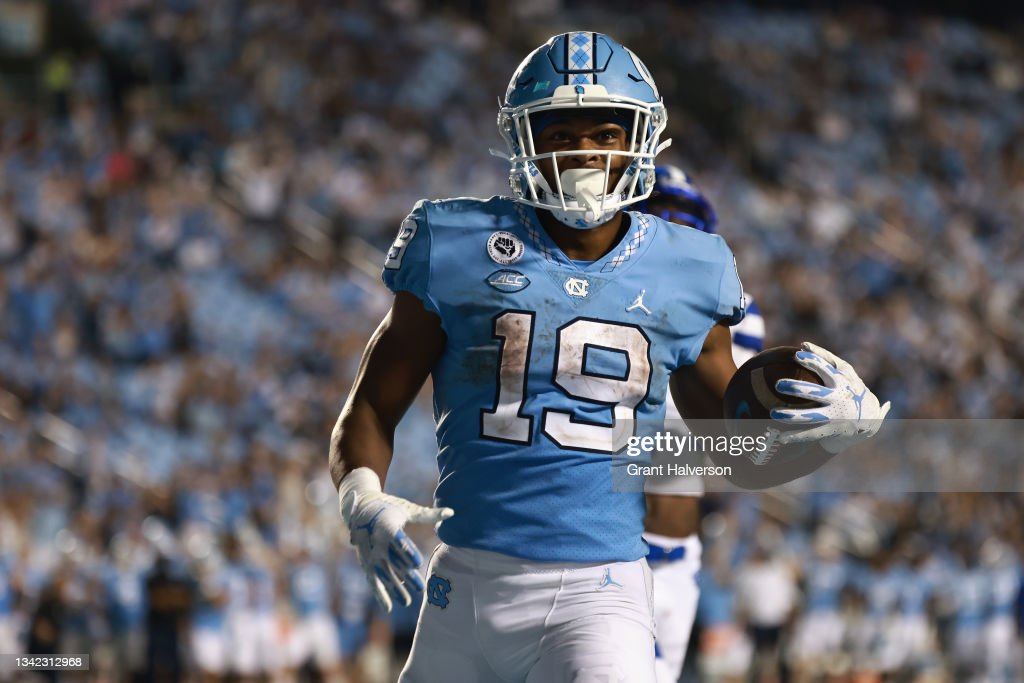 As we head into Day 3 of the 2022 NFL Draft, there is a name we are likely to hear, and it will probably be in the early part of the final rounds: North Carolina running back Ty Chandler. Following a few impressive days of practice during the Shrine Bowl week in Las Vegas, he took the time to talk with Josh Carney, Owen Straley, and me about his path to the draft.

He spent four years of his undergraduate experience in Tennessee in a crowded backfield, splitting reps with other backs. Despite having to share the workload he logged 421 carries for 2046 yards, not to mention 58 receptions for 465 yards. In 2020, Chandler lost the starting role to sophomore Eric Gray and made the decision to transfer to North Carolina as a graduate student for his final year of eligibility. As he tells it, he enjoyed his time in Tennessee but felt like there was more left on the table and more he could have shown with his former team, which prompted the move to North Carolina.

It turned out to be a smart move, as he racked up 1092 rushing yards and added 216 receiving yards, scoring as many rushing TDs in his final year as he had in all four prior years combined.

Chandler appreciated the opportunity to work with new coaches and teammates as a way to learn and improve his game, the same way he looked at his invitation to play in the East West Shrine Bowl game. He welcomed the chance to share the running backs room with guys that he had competed against and to pick their brains and share knowledge, as well as the chance to get better on the field.

When asked about the challenge of working with all new offensive linemen at the Shrine Bowl, which could impact his success, Chandler emphasized his patience and willingness to work. This was the same approach he took for his transition to an all new team last season:

“It just takes time and patience and I’m willing to work with them and just see the schemes that they want to run and how they want plays to develop and how they want to block. I feel like once we figure that out, we’ll just click. So I’m excited about the opportunity. Some people are scared of change and I want to look forward to change just see how things play out.”

As far as his preferred scheme, he’s open to a variety. He explained that working with a lot of different coordinators, he has had the chance to work in pro style and spread offenses. He likes being lined up in the slot and catching the ball out of the backfield, a skill he showed well during the week of practice.

Chandler talked about the warm welcome he received from quarterback Sam Howell, whom he calls a true student of the game. Howell took him under his wing and helped him get comfortable with a new school and a new offense. He joked that he might even get some tips on running the ball from his mobile quarterback. He described Howell as a laid back guy who is “never too high or too low” and a well-respected leader.

When asked what he sees as his strengths as a player, the running back replied that he is able to be patient and see plays develop in front of him, reminding us of a former Steelers running back. Chandler also spoke about his ability to get downhill quickly. He feels he has gotten better at just making people miss and shedding tackles, skills that he continues to work on.

As far as players he tries to emulate, he mentioned Saints running back Alvin Kamara, a player he watches a lot specifically for his receiving abilities, catching the ball in the backfield and even lining up either inside or outside. He wants to replicate that versatility in his own game to improve his production.

Chandler’s college work included special teams, including returning kicks and punts in practice but not in actual games in order to keep him fresh to carry the ball. He shared that he’s “down for anything and just looking for opportunities to see the field.”

On the final day of practice, I had a chance to talk to the the Washington Commanders Assistant Running Backs Coach Jennifer King, who was serving as the running backs coach for the West Team and had high praise for Chandler. She was most impressed with his running style. As she explained, “he runs with a natural lean, so he is always falling forward quickly to make plays happen.” Coach King said he showed a great ability to absorb all of the information they threw at the players throughout the week. As far as whether Chandler can be an every down back, it all comes down to protection, which is more complicated on the NFL level compared to what running backs are asked to do in college. She predicts he will do well with that additional responsibility.

In the Shrine Bowl game, Chandler had 11 carries for 69 yards with a long run of 21 yards. He rushed for 16 yards on the first offensive play of the game:

Chandler is able to make a few defenders miss on his 21 yard run:

Since that game, he caught a lot of attention at the NFL Combine with a blazing 4.38 40 yard dash.

With his speed, his ability to create explosive plays and his receiving skills, Ty Chandler would be the perfect complement to Pittsburgh running back Najee Harris. The Steelers have other more pressing needs to address in the draft and Chandler is unlikely to be headed to their roster. I expect him to get the call during the fourth round today and he will surely make that team’s offense better immediately.