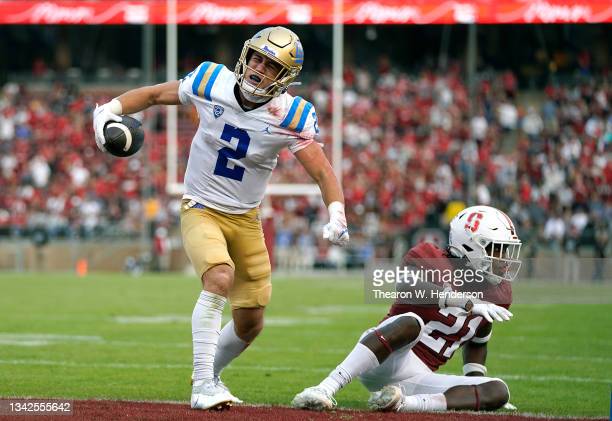 With less than two weeks until the “Sin City” hosts the NFL Draft, there’s no letting the cat out-of-the-bag when it comes to the Steelers having done their due diligence on this year’s crop of quarterback prospects. While many will argue the team should choose to bolster an aging defensive line or a receiving corps that was left razor-thin by free agency, the majority of pundits overwhelmingly suggest the team will take a signal caller in round one.

Dalton Miller of Pro Football Network is no different, as suggested by his latest three-round mock offering, which has the team selecting Cincinnati’s Desmond Ridder with the 20th pick. Ridder offers an enticing blend of size and speed, with his 4.52 40 time at the NFL Combine, tops among QB’s. A four-year starter for the Bearcats, Ridder obliterated the record books at Cincinnati, throwing for 87 touchdown passes and 12,418 yards of total offense. While at the helm, Ridder led the Bearcats to a sterling 44-6 record, the third-most wins in FBS history. Miller had the following to say of his selection:

“The Pittsburgh Steelers can’t sell hope on Mason Rudolph and Mitchell Trubisky. While Desmond Ridder isn’t the same caliber of prospect as any of the top 2021 QBs, he has a ton to like on tape. He’s mechanically proper with good athleticism and flashes an outstanding process. However, while he’s an aesthetically pleasing passer, Ridder’s accuracy is consistently inconsistent. If he can improve on that, he’ll end up being the Steelers’ franchise QB.”

Ridder fits the bill of what the team is looking for, from a mobility standpoint, and point blank, he’s a winner. Ridder has been on record saying his goal is to win a starting job from day one, which may not be the best idea, considering he does have some fine tuning to do, like the aforementioned accuracy issues by Miller. However, he has the defining traits of a franchise QB.

In the second round, Miller has the team getting back to the basics of continuing to fortify their offensive line, while also protecting their first round investment. Bernhard Raimann is a massive human being at 6-foot-7 and 305 pounds, and his best football may still be in front of him. A native of Austria, Raimann played American football there before coming to Michigan via a high school exchange program. His standout play at wide receiver earned him a scholarship to Central Michigan, where he began his career as a tight end, starting several games in 2018 and 2019, before ultimately shifting to the offensive line in 2020. He started all six games that year in a season shortened by the Covid-19 pandemic, which makes his quick transition to a new position that much more remarkable. He earned first-team All-MAC in 2021, and was also the winner of the MAC Medal of Honor, which is handed out for academic and athletic excellence.

“Since he is so new to the position, Raimann still has much to learn as a blocker,” Miller said. “However, he’s one of the more athletic tackles we’ve seen in recent history. As he transitions his frame, he needs more core and lower body strength to deal with the rigors of anchoring against NFL pass rushers. While he’s an upside pick, his upside is exciting because he is so new to the game.”

Raimann gives off vibes of Eric Fisher, the #1 overall pick in the 2013 draft, who also played for the Chippewas. It’s possible had he made the transition to tackle earlier, we’d be talking about Raimann in a much similar draft slot as Fisher. A tremendous athlete who took to the coaching at CMU and developed rapidly, we could be looking at this pick a few years from now as a massive steal.

To round out his mock, Miller has the team finally adding to their receiver room with the choice of UCLA’s Kyle Philips in Round 3. Chip Kelly’s first football recruit there, the 5-foot-11, 191-pound Philips profiles best as a slot receiver who, despite his size, has some moxie and toughness about him. He shows standout footwork to beat press coverage, and he put his name on the map this past season when he put cornerback and likely top 15 pick Derek Stingley Jr. in the spin cycle, en route to a 45-yard touchdown. He also doubles as a punt return man, and a highly successful one, boasting a 19.8 average over his four years at UCLA.

What do you think of Miller’s mock? Too much of a focus on offense? Let me know your thoughts in the comments below about any of these picks.