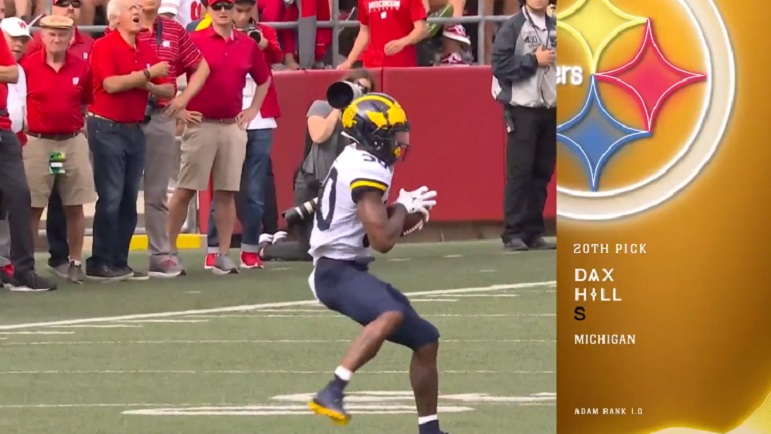 The 2022 mock draft season is beginning to wind down as there are now just two weeks remaining until the NFL Draft takes place in Las Vegas, NV. On Thursday, Adam Rank of NFL.com released yet another mock draft version and this one revolves around what he believes teams ‘should do‘ in the first round.

For the Pittsburgh Steelers at 20th overall in the first round of the 2022 NFL Draft, Rank believes they should select Michigan safety Dax Hill. Below is his reasoning for that:

“I thought about this a lot, Steelers. This might be something I need to talk about more later, maybe after the draft, but I like Mitch Trubisky for you, and I hope you give him a chance. I know there will be irate Steelers fans if you pass on Kenny Pickett here — a man drawing comparisons to Dan Marino back in 1983. But I honestly thinking you’re good. And it doesn’t look like Pickett would be great in that Pittsburgh cold. (Yes, I know, I’m kidding about that.) I’m going to say give Mitch a chance and instead go with Hill, who will end up being the DROY if you draft him.”

Saying that Hill will end up being the Defensive Rookie of the Year is about strong. That, said, the Steelers could use another future safety to play alongside Minkah Fitzpatrick moving forward. The team is expected to address the strong safety position at some point during the 2022 NFL Draft and possibly somewhere in the first three rounds. For whatever it’s worth, Steelers general manager Kevin Colbert and head coach Mike Tomlin both attended the Michigan pro day this year. Tomlin reportedly went out to dinner with at least one Michigan player during his pro day visit and there’s a good chance that Hill, and others, were also present for that.

In his three seasons at Michigan, Hill registered 149 total tackles with 7.5 of them resulting in lost yardage. He also recorded four interceptions, 15 passes defensed, three fumble recoveries and half a sack

Most draftniks envision the Steelers selecting a quarterback in the first round this year and with good reason. If, however, the Steelers decide not to go the quarterback round in the first round this year, the safety position is certainly a good possibility. Because of that, Hill could indeed wind up being the selection if that’s the position that’s ultimately addressed at 20th overall.