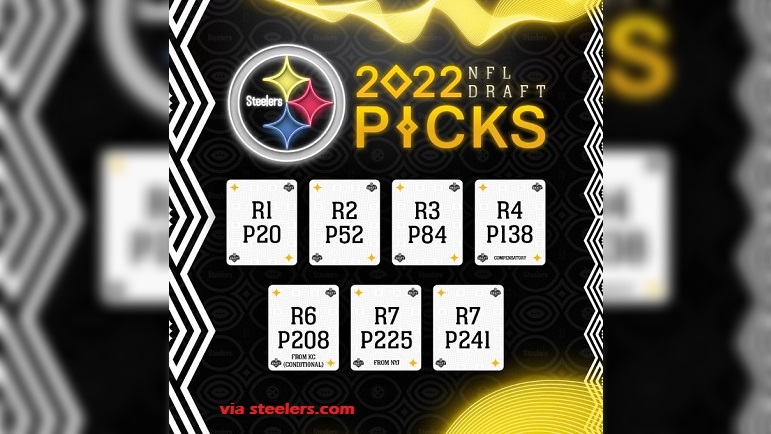 When it comes to the NFL Draft, everyone loves a good trade or two in the first round to really shake things up.

ESPN’s Bill Barnwell certainly feels that way, considering he released a monster mock draft of sorts Wednesday morning, proposing a first-round trade for all 32 selections. Sounds like a lot, right? Well, it certainly is.

That said, it’s also quite interesting because Barnell had the Pittsburgh Steelers involved in four hypothetical trades at various draft slots, proposing the acquisitions of draft picks to land a guy like Liberty’s Malik Willis, while also moving a player already on the roster to help with some capital.

Barnwell starts his hypothetical trades for the Steelers at No. 7 overall with the New York Giants, proposing Pittsburgh sends the Giants No. 20 overall and a 2023 first-round draft pick to move up to No. 7.

“Pittsburgh coach Mike Tomlin has been on the recruiting trail looking at quarterbacks this offseason, and while his team could stay put and draft one at No. 20, the Steelers would probably be inclined to move ahead of the Falcons and Seahawks to take their man,” Barnwell writes. “I’m not sure Pittsburgh would start a rookie such as Malik Willis or Kenny Pickett immediately with Mitch Trubisky in the fold, but with a great defense and in a division with Joe Burrow, Lamar Jackson and Deshaun Watson, it can’t afford to bide its time and go with a low-ceiling quarterback option.”

While that feels like a steep price to pay to move up 13 spots, getting a guy like Willis as the future franchise quarterback would be well worth it in the Steelers’ eyes, considering the tools he brings to the table at the position. He’d obviously have to sit a year and develop behind Mitch Trubisky for a year before seeing game action, but we’ve seen other raw quarterbacks need time to sit before being inserted into the lineup have success in Year 2.

The next draft trade scenario for the Steelers from Barnwell was an interesting one, as the ESPN writer proposed the Steelers move up from No. 20 overall to No. 15 with the Philadelphia Eagles, sending a 2023 second round pick to the other side of the state while receiving wideout JJ Arcega-Whiteside in return with the No. 15 pick.

“This would be a smaller move for Pittsburgh, which would need to move up only five spots in this situation to get ahead of the Saints at No. 16 in the potential quarterback wars,” Barnwell writes. “Arcega-Whiteside would be a flier for a team with a great track record of developing wideouts, while adding a 2023 second-round pick would give the Eagles a chance to score extra capital in the case they need to move up for a quarterback then.”

That’s an interesting trade overall, considering the draft capital sent to the Eagles wouldn’t be that much overall, assuming the move up to jump the New Orleans Saints is to acquire someone like Desmond Ridder or a falling Kenny Pickett. Adding a guy like Arcega-Whiteside is also an interesting flier, considering the Steelers’ track record at the position. However, after claiming Miles Boykin on waivers on Tuesday, the Steelers probably aren’t in the market for another underperforming height/weight/speed guy at the position to try and salvage.

At No. 20 overall, things really went off the rails for Barnwell and the Steelers’ trade proposals.

Barnwell proposes the Steelers trade out of the first round with the San Francisco 49ers, sending them No. 20 overall and the No. 84 overall pick in the third round to acquire No. 61 overall in the second round, No. 134 overall in the fourth, and…quarterback Jimmy Garoppolo.

“Here’s a creative way for the Steelers to land a veteran quarterback and get back to competing in the AFC North,” Barnwell writes. “They don’t have the cap space to afford the $25 million remaining on Garoppolo’s deal in 2022, and the 49ers need draft capital after trading three first-rounders for Trey Lance. We can satisfy both of these teams’ needs if they manage to split the money.

“To get this to work, the 49ers would convert $16 million of Garoppolo’s base salary into a roster bonus and pay it immediately, bringing his salary down to a far more palatable $8.2 million. The Steelers would move down 41 picks for the privilege. This deal would value Garoppolo and the $16 million San Francisco is eating as something close to the 27th pick in a typical draft. There’s no way these teams could make this move on the fly, so this would have to be agreed before the draft. The Steelers would need to get a look at Garoppolo’s recovery from surgery, and the 49ers wouldn’t restructure his contract unless they were sure a deal could be done. This is probably too messy to actually happen, but there’s a universe in which both sides could benefit.”

Sure, it’s an interesting proposal, but Barnwell completely forgets the Steelers already invested at the position in Mitch Trubisky, and were pleased to be able to do so without giving up draft capital to do it, according to both Mike Tomlin and Kevin Colbert. Now all of a sudden they’re going to make a trade for Garoppolo, who is still recovering from shoulder surgery?

It really doesn’t make any sense whatsoever and would be disastrous for the Steelers overall.

Finally, Barwell wraps up the Steelers’ involvement in hypothetical trades in the first round with a three-way trade between the Steelers, Green Bay Packers and Atlanta Falcons involving the No. 8, No. 20 and No. 22 picks, as well as wide receiver Chase Claypool.

“For Pittsburgh, this is using what the organization does well to replenish its biggest weakness. The organization has an incredible track record of finding receivers in the middle rounds, with Claypool the latest member of a group that includes Antonio Brown, Mike Wallace, Emmanuel Sanders, JuJu Smith-Schuster and Diontae Johnson,” Barnwell writes. “The latter is due for a massive extension, which would make it difficult for the Steelers to then offer Claypool a similar deal the following offseason. There was at least a little friction between Claypool and the organization last season, and while I don’t think it was enough to force a trade, this would be a chance for Pittsburgh to get a significant draft pick in return.

“In this scenario, the Steelers sacrifice Claypool and the No. 20 pick to move up and get their quarterback of the future. They can use their second- or third-round pick to draft Claypool’s replacement, sign Johnson to an extension and move forward with a transitioning core on offense. This deal values Claypool as being worth something in the ballpark of the No. 34 pick in a typical draft.”

This trade sure is interesting, and one that I’d be very tempted to involve myself in, were I Colbert and the Steelers. Trading Claypool away after a really rough second season would be a difficult decision overall, but if that’s the cost of doing business to ensure you can go up and get your guy at the most important position in sports, you have to seriously consider it.