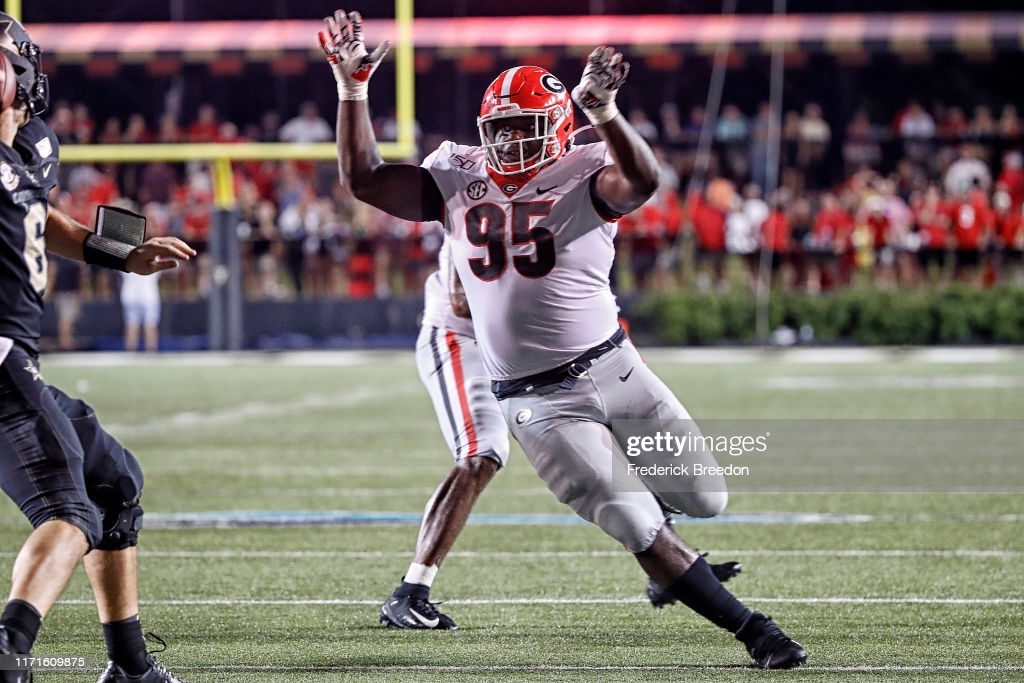 While the odds of the Pittsburgh Steelers drafting a QB are high, they’re not guaranteed. So if quarterback isn’t an option for whatever reason, what other direction could the Steelers go? Yahoo’s Eric Edholm played out that scenario in his latest mock draft, mocking Georgia DL Devontae Wyatt with the Steelers’ 20th pick.

“Their eyes might be set on either Willis or Pickett. But in this scenario, the Steelers are able to address a sneaky-big need. Expecting much from Stephon Tuitt or Tyson Alualu feels a smidge risky, and Wyatt has a similar profile to previous higher-round Steelers DTs such as Ziggy Hood and Javon Hargrave.”

Wyatt’s name has flown under the radar, losing out to bigger-name Bulldog linemen in Travon Walker and Jordan Davis. Walker’s name has gained plenty of steam in the pre-draft process, and he could go as high as #2 to the Detroit Lions. Davis is the draft’s freakiest athlete, a 340-pound nose tackle who turned in the second-best RAS score in history, trailing only Hall of Fame WR Calvin Johnson.

But Wyatt is an impressive prospect in his own right. Weighing in at just under 6’3″, 304 pounds, he ran a 4.77 40 at this year’s Combine. His college production was light, just seven TFL and 2.5 sacks his final year, but he was part of a great D-line that had top talent across the board, making it hard for one guy to put up huge numbers. Wyatt also forced a pair of fumbles as a senior.

In early February, our Jonathan Heitritter summed Wyatt up in this way:

“He best profiles as a penetrating 4-3 DT, but he can still be a disruptive 3-tech or 4i that can even kick inside if needed to hold his own as a run defender or attack the A-gap. His quick twitch and movement skills make him a fun chess piece that can be schemed many different ways given his ability to blow things up in the backfield.”

Defensive line is a possible need for this team and will become a greater one if the team finds out – or is still unsure – Stephon Tuitt won’t play in 2022. Recent signs have pointed to him trying to come back for this season, but the Steelers admit they don’t yet have any definitive answers.

Even if Tuitt returns, the Steelers have an older defensive line room with NT Tyson Alualu likely in the final year of his professional career. Wyatt could become similar to what the Steelers had in Javon Hargrave, a quicker, penetrating nose tackle who plays upfield as opposed to taking on blockers.

The team has done homework on some defensive linemen in this year’s draft, and they, like the rest of the NFL, sent the house to Georgia’s Pro Day this year. Mike Tomlin, Kevin Colbert, and Brian Flores all attended the workout, making Wyatt a “fit” to be taken in the first round.

In Edholm’s mock, Liberty QB Malik Willis and Pitt’s Kenny Pickett were off the board by the Steelers’ selection. They were the only two quarterbacks chosen in the mock.

Check out our full report on Wyatt below.