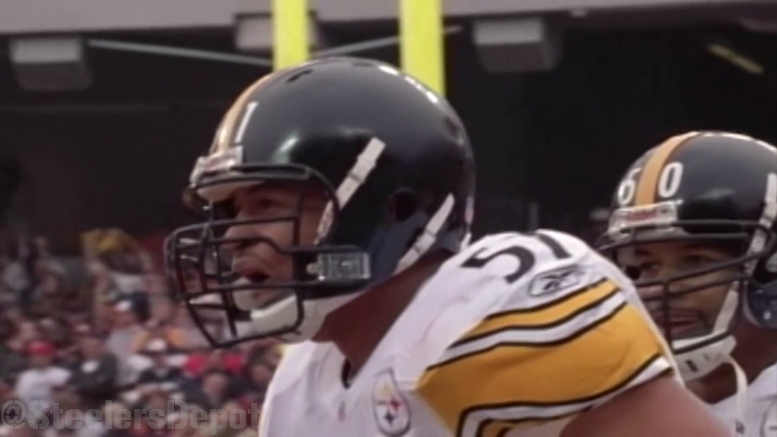 When it comes to the history of the linebacker position in Pittsburgh Steelers’ history, it’s a long, illustrious one.

Of course, the Steelers have three linebackers currently enshrined in the hallowed halls of Canton in Jack Lambert, Jack Ham, and Kevin Greene, but that doesn’t quite begin to tell the history of the Steelers at the position.

Throughout the Steelers’ 88 seasons, Pittsburgh has seen some great linebacker play, many of whom aren’t even in the Hall of Fame, like Andy Russell, Joey Porter, Levon Kirkland, Lawrence Timmons, and more. That said, the Steelers will see at least a pair of linebackers in James Harrison and eventually T.J. Watt join the trio in Canton some day.

Knowing the history of the position in the Steel City, and the number of greats that have come and gone at the position over the years, I found myself down a rabbit hole on Pro-Football-Reference and its Hall of Fame Monitor page, looking at a number of statistics while trying to make the case for a handful of Steelers players that I believe deserve a spot in the Hall of Fame.

The first player that came to mind might be a surprise, but after doing a deep dive on him a few weeks ago and really reminiscing on his days in the black and gold, James Farrior has a legitimate case for a spot in Canton.

For starters, Farrior spent 15 seasons in the NFL with the New York Jets and Pittsburgh Steelers after being the No. 8 overall selection in the 1997 NFL Draft out of Virginia.

Of course, Farrior had his struggles in New York, playing out of position as an outside linebacker, though he did rack up 145 tackles — including an insane 109 solo — in his final season in the Big Apple.

Once in Pittsburgh, Farrior made the switch to off-ball linebacker in the Steelers’ 3-4 defense under Dick LeBeau and unleashed a monster inside linebacker in #51.

As a member of the Steelers, Farrior’s stat line reads like this: 1,085 tackles, 82 tackles for loss, 47 quarterback hits, 30.0 sacks, eight interceptions, 12 forced fumbles, 10 fumble recoveries, and 53 passes defensed. Quite impressive.

For Farrior’s full career, including his time in New York? 1,440 tackles, 98 tackles for loss, 35.5 sacks, 11 interceptions, 18 forced fumbles, 12 fumble recoveries and 69 passes defensed, all while playing in 230 career games with 197 career starts.

All that leads to the question and ultimate discussion: Does James Farrior belong in the Hall of Fame?

Understandably, many are probably scoffing at that question as Farrior is undoubtedly in the Hall of Very Good, and already has a place in the Steelers’ Hall of Honor as a member of the Class of 2020, forever securing his place in Steelers’ history.

But really, what about Canton?

According to PFR, the Hall of Fame Monitor “is a metric designed to estimate a player’s chances of making the Pro Football Hall of Fame using AV, Pro Bowls, All-Pros, championships, and various stat milestones. The players listed below are the top 250 HOFm-rated players who played ILB starting in 1955 or later for at least 50 career games. A score of 100 is around the average modern-era inductee.”

Look at PFR’s Hall of Fame Monitor, Farrior has an interesting place overall in the list, sitting one spot ahead of Class of 2022 Hall of Fame inductee Sam Mills. 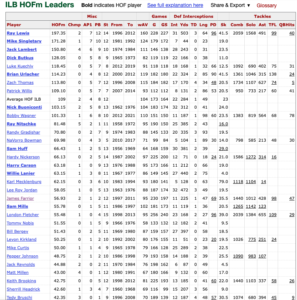 Farrior holds a HOFm of 56.93. While his HOFm falls well below the position’s Average HOF ILB of 109, two championships, four First Team All Pros, eight Pro Bowls, and at least 12 years as a starter, he has a bit of a compelling case.

Farrior comes up a bit short in those categories with just one First Team All-Pro and two Pro Bowls, the former Steelers’ great does have two championship rings and was the leader of one of the best defenses in modern NFL history, which will certainly mean something to Hall of Fame voters. That season Farrior earned Second Team All-Pro and a Pro Bowl nod. Prior to that, in 2004 Farrior finished second in the NFL’s Defensive Player of the Year voting to Hall of Famer Ed Reed, which should be another feather in his cap when it comes to his Hall of Fame candidacy.

Though he is one spot ahead of a guy like Mills on the HOFm, it’s important to note that Mills also had a stellar USFL career, which certainly played into his Pro Football Hall of Fame selection. For comparisons sake, Mills never won a championship, was named First Team All-Pro once and earned five Pro Bowl trips. He was also a top four finisher in the NFL’s Defensive Player of the Year voting twice, though he never finished as high as No. 2 like Farrior did.

In recognition of there now being 51 days remaining until the #Steelers kick off their 2019 regular season against the #Patriots, here's former No. 51, LB James Farrior (@JamesFarrior), and his final career interception in 2009 against the #Ravens. pic.twitter.com/iCitGd2gBU

Aside from Mills, a name like Harry Carson stands out on the HOFm ahead of Farrior. Carson, of course, was a standout linebacker with the New York Giants for 13 seasons alongside Lawrence Taylor. Carson won just one championship and was never named a First Team All-Pro. However, he did earn an impressive nine trips to the Pro Bowl.

How that compares to Farrior is a bit murky, considering the Pro Bowl has turned into a popularity contest, and Farrior was an under-the-radar guy even in his own city with the Steelers, let alone nationally.

It’s extremely unlikely Farrior gets into Canton at this point, unless a veterans committee puts him in years later. That said, Farrior — at least based on his resume and the HOFm — has a case for enshrinement in Canton. He’s right up there with some of the all-time greats, both in Steelers’ history and in the NFL overall.