Dick LeBeau’s Fire X blitz: Like Tom Selleck’s mustache, it’s been around forever, everyone loves it, and no one quite understands how it works.

We’ve documented the concept several times in the past, including devoting a Chalk Talk to it, but the focus has always been on the blitz itself. We’re going to touch on that again today, but we’re also going to pay special attention to the coverage in the back end. And the amazing consistency LeBeau has maintained while making this an effective wrinkle.

I mentioned it on the video but the beauty of these Fire Zones is the ability to send five, get pressure, and still have six in coverage. A blitz means little if it can’t get home, and with 6+ rushers, natural windows in the defense’s coverage will be created. There comes a point when you can’t cover everything in the back end. This blitz eliminates that issue.

Briefly, the zone dog up front. Five man rush. In the base defense, the three down lineman rush with the inside linebackers twisting  up both “A” gaps. The DL is slanting to down a gap to accomplish two goals: draw eyes from the interior line to free the A gaps for the blitz, and maintain contain principles on the quarterback since neither outside linebacker comes off the edge.

Our coverage is dictated based on offensive personnel. Single high safety with Cover three principles. Outside cornerbacks take away the deep third and will show some man principles if #1 is their only threat. Deep safety plays the middle third. Basic concept that doesn’t change.

What does change is the three under. Coverage is dictated by personnel. But we are always going to get two hook defenders.

We’re either getting three outside or three inside. If there is an outside threat, a player removed from the core of the formation, the SS and OLB are going to switch responsibility, and we’re going to get three outside. SS on the hook, but really responsible for #2, the weakside backer on the opposite hook, and the strongside – on the same side as the SS – backer rolling to the middle and carrying anything up the middle.

Let’s show the concept if the SS was playing the middle zone if there’s no outside threat. 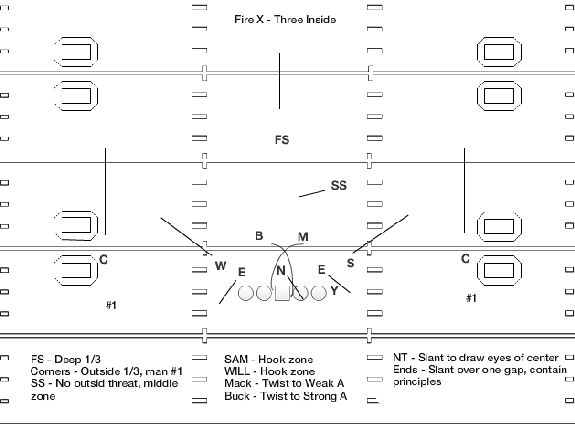 Against the Baltimore Ravens in the Wild Card game, we instead get the outside threat. 11 personnel. James Harrison will come down near the LOS and Troy Polamalu, recognizing he is the outside defender, slides over. Harrison goes from the hook to the middle zone. Simply the two players swapping assignments. 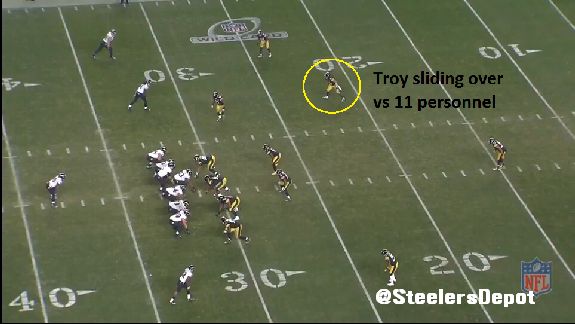 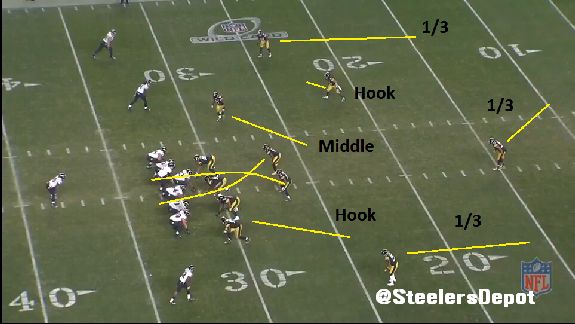 We are looking to take away all the main passing windows. Deep third, deep middle, two hook zones, and the middle zone. Squeeze the windows and make the QB make a difficult throw, ideally under pressure. 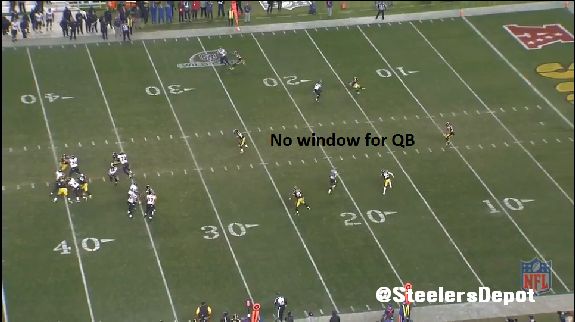 Pressure gets home with Sean Spence coming through unblocked and the play results in a fumble.

Let’s see LeBeau add a wrinkle to it. Can we still run Fire X in subpackage with our outside linebacker aligned off the line, playing over the guard? You bet.

We’ll rotate the strong safety, Will Allen, down to play the hook zone. 11 personnel with another receiver outside so the nickel corner is going to act as the hook across the field. The furthest ILB, Lawrence Timmons, is playing the middle, in the hole. Three deep over the top. 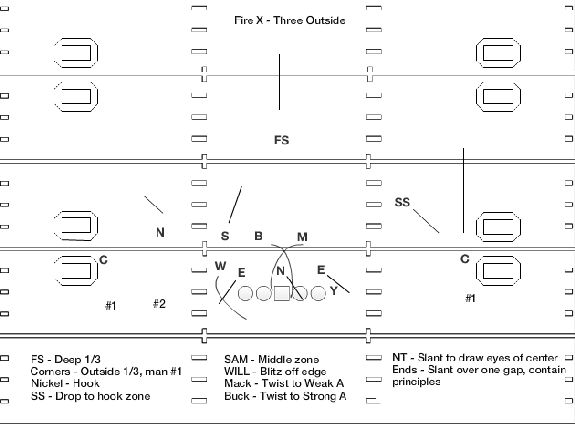 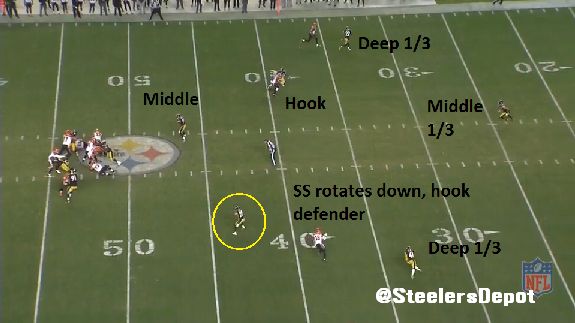 Fire X gets home again with interior pressure on Andy Dalton, who to his credit, makes a good throw. Steelers get the best of the play, Antwon Blake stripped AJ Green and recovered the ball, but we’re not paying attention to that right now. We care about how the play unfolds. 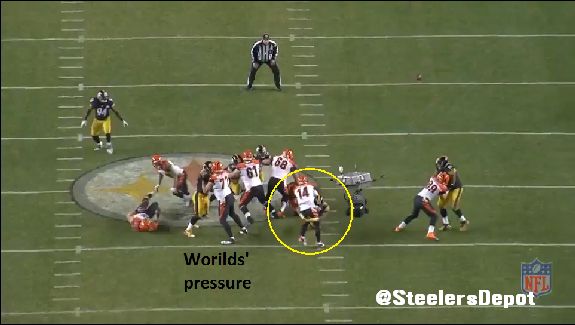 The blitz from the end zone view. ILB twist, Timmons drops, and the ends contain. 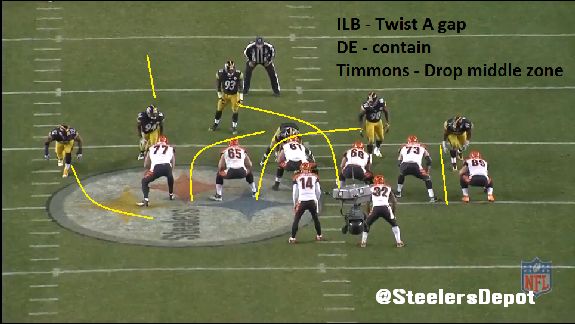 I know we’re not talking about a concept that goes back 70 years, but it’s still fun to see how such a simple concept has been used in the same fashion for basically LeBeau’s entire time in Pittsburgh.

Jeff Reinebold, currently the special teams and linebackers coach for the CFL’s Hamilton Tigers-Cats, has a great video breaking down the blitz that frankly, I learned a lot from. Here he is showing examples of the blitz from in what appears to be from 2004. We’re getting the exact same look.

Five man rush, three deep, two hook zones with the SS taking #2, and the linebacker to that side playing the middle. 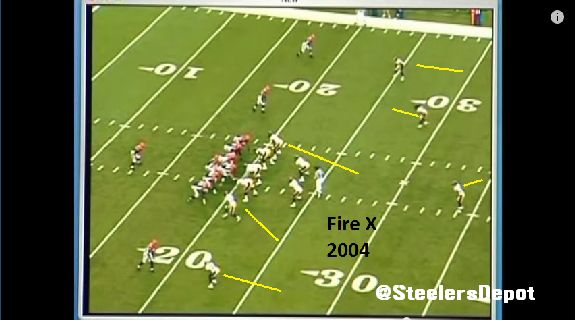 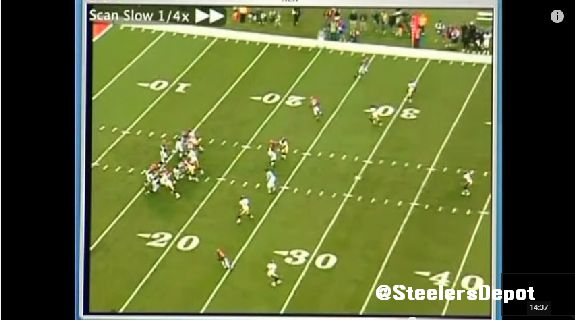 If you’re interested, here is an example from that time period with the Steelers playing three inside, Polamalu carrying the middle because there is no additional outside threat. 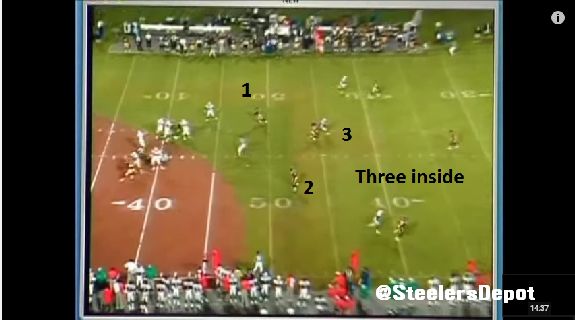 It’s these kind of principles that changed the way teams ran defenses and in turn, how offenses reacted. No longer could a quarterback assume man coverage and throw hot versus a blitz. There’s a great story in Tim Layden’s book, Blood, Sweat, and Chalk – a personal favorite of mine for its history – about one of the first times LeBeau ran a zone blitz with the Cincinnati Bengals.

“Before the 1983 season, LeBeau put in a coverage package in which the Bengals would show blitz, encouraging the quarterback to read man coverage in the secondary. But instead of manning up his corners on the outside in straight one-on-one coverage, LeBeau had 14 year veteran corner Ken Riley “sit down” (hold his ground) and rotated a safety into zone coverage behind him. Before long, this would become a standard coverage, but at the time it was highly unusual. As soon as the quarterback read blitz, his assumption would be that Riley would be backpedaling to avoid getting beat deep, prompting the QB to throw quick and short, into Riley’s short zone.

LeBeau happily recalls that first experimental zone blitz. ‘So there was his exhibition game and we just decided to try it. We ran the zone blitz and the quarterback just threw the ball straight to Ken Riley,’ he says at Steelers’ training camp in the summer of 2009. ‘And I thought, hey, we might have something here.’ He smiles broadly. ‘Turns out we did.’”

Throughout my breakdown, I’m well aware LeBeau will not be pacing the Steelers’ sideline in 2015. But I still expect to see some of the Fire X sprinkled into the defense under Keith Butler. It wasn’t even a concept, to my disappointment, often used in LeBeau’s last year. If anything, there could be an uptick under the new regime.

The downside here? It takes good communication from the safety and outside linebacker if assignments have to switch based on personnel. The Steelers could potentially have a situation with rookie Bud Dupree and first-year starter Shamarko Thomas needing to communicate. Always capable of player’s screwing up their assignment and allowing big plays. That will be key.

But the concept is sound, true, and above all, effective.