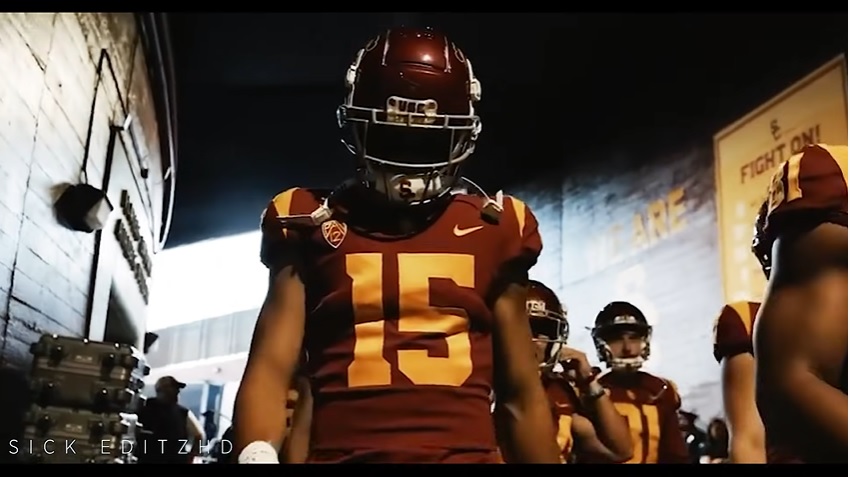 We are right in the midst of the free agency flurry, with the Pittsburgh Steelers making a higher-than-usual amount of acquisitions, primarily due to a wealth of cap space. However, one position that was hit pretty hard by them was at wide receiver, where they lost JuJu Smith-Schuster, James Washington, and return specialist Ray-Ray McCloud. The team added an upgrade over the latter this past week, signing former First Team All-Pro return/slot man Gunner Olszewski of the Patriots. However, the depth of the position has been compromised significantly, and if an injury occurs to starters Chase Claypool or Diontae Johnson, the team could be in real trouble.

Perhaps that’s why the latest mock draft from Pro Football Network has them solving that problem. The last time the team took a receiver from USC, it worked out pretty well for them, and this mock has them going back to that well again in the form of Drake London. A towering receiver at 6-foot-4 and 219 pounds, the AP third team All-American led the Trojans with 88 catches for 1,084 yards and seven touchdowns-in only eight games. His junior season was cut short due to a broken ankle, but he is on the mend. He will not work out at the Trojans’ Pro Day on Wednesday, but will instead hold his own personal one on April 5, where he’ll do positional drills. It remains to be seen if he’ll run the 40, but that’s not really his strong point.

A former Trojan basketball player in the 2019-20 season, he brings that same mentality and game to the football field, routinely making 50/50 balls look like 90/10 ones. His body positioning, massive catch radius and high-point ability will make him a coveted red zone target at the next level. According to NFL.com, an area scout for an AFC team had the following assessment on London:

“I think he is going to test better than people think but I doubt he runs. I don’t care how fast he is, I wouldn’t be against him because his ball skills are really special.”

Not a burner type, a pro comparison he’s often linked to is the Tampa Bay Bucs’ Mike Evans, likely due to his sheer size and ability to impose his will on smaller defensive backs. Although he lacks the top-flight speed of Claypool, he would provide a valuable chess piece and a matchup nightmare that Matt Canada would enjoy employing all over the field, while also more than adequately replacing Smith-Schuster. Wherever he ends up, it’s a safe bet you’ll see London putting a few victims on ESPN Monday Night Countdown’s “You Got Mossed” segments next season.