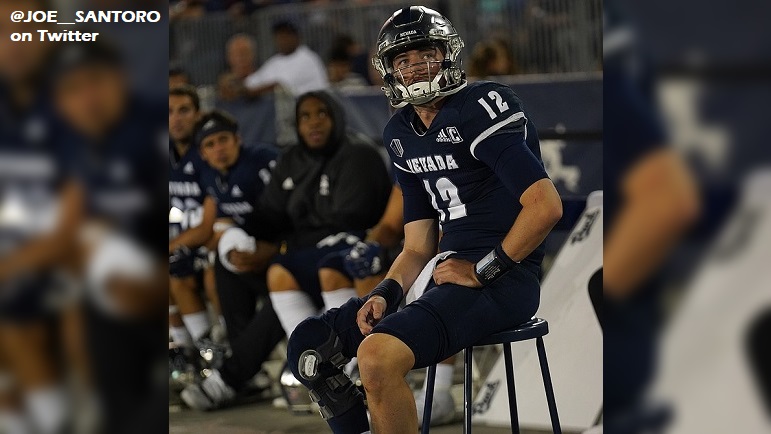 Now that Pittsburgh Steelers quarterback Ben Roethlisberger has retired, all eyes are on Head Coach Mike Tomlin and General Manager Kevin Colbert, watching their every move. The team has backup Mason Rudolph under contract and reportedly plans to place an original round restricted free agent tender on 3rd string QB Dwayne Haskins, a former first round draft pick who was released by the Washington Football Team after just two seasons. Although Art Rooney II recently said that the two players will be able to compete for the starting QB position, the team will keep its options open. Jay Glazer has repeatedly reported that Tomlin does not want to work with a rookie at QB and prefers to bring in a veteran. Despite all that, Tomlin, Colbert, offensive coordinator Matt Canada, and quarterbacks coach Mike Sullivan are all at the Senior Bowl this week and they have seem to be showing a lot of interest in the top players heading into the 2022 draft.

There has been a lot of buzz surrounding Nevada QB Carson Strong, who is currently at the Senior Bowl. There is also a fair amount of concern about the status of his knee. Strong has had two knee surgeries, and his potential mobility has been a huge question mark when evaluating his draft position and potential for success in the NFL. I’ll leave it to the Steelers Depot crew to let you know how he looks this week. But based on a Senior Bowl week press conference, we finally know what the original issue is, thanks to our own Johnathan Heitritter, who posed the question, and to Strong, who was surprisingly transparent (perhaps against his agent’s wishes). Here’s the quote:

“It’s not a meniscus tear. It’s called osteochondritis dessicans. It’s a weird thing, you know, has to do with just cartilage and it’s called a lesion. Basically, part of your cartilage just starts to detach from the bone. So the first surgery, they put those pins in there to reattach it to my bone. This surgery they just took that out and put in new stuff so, you know, I’m feeling great. Yesterday I moved fluidly, no knee brace, I’m rolling out to my right and my left and I have no problem.”

So now that we have an actual diagnosis, let’s take a look at what that means in terms of treatment, recovery, and long term outlook.

[Quick disclaimer, as always: I have not spoken to nor examined Strong and I have not reviewed any of his medical records. What follows is analysis based on medical studies and what has been publicly stated about his medical condition.]

WHAT IS OSTEOCHONDRITIS DESSICANS?
From the American Academy of Orthopaedic Surgeons (AAOS):
Osteochondritis dissecans (OCD) is a condition that develops in joints, most often in children and adolescents. It occurs when a small segment of bone begins to separate from its surrounding region due to a lack of blood supply. As a result, the small piece of bone and the cartilage covering it begin to crack and loosen.
• It is most common in the ankle, knee, and elbow
• In children who are still growing, it can sometimes heal itself
• In grown children and young adults, there is a higher chance of the cartilage separating from the bone
• The most common location is the knee where the femur (thigh bone) meets the lower leg (tibia)

So what does mean? Basically, the blood flow to a section of bone is so bad that its attachment to the cartilage is compromised.  This can result in a varying degrees of damage from a softening of the bone to a portion of bone separating so that the attached cartilage is no longer secured to the main bone and floats freely in the joint.

Let’s a quick break for an anatomy lesson:

Cartilage serves as a cushion between two bones where they meet in a joint.
Each knee has a medial and lateral meniscus. These crescent-shaped bands of cartilage serve as the shock absorber for the knee and allow the tibia (the larger of the lower leg bones) to glide over the bottom of the femur when the knee bends. The menisci are wedges, thicker at the border where the blood supply is best and thinner in the inner aspect, which has a limited blood supply. The lateral meniscus covers a larger portion of the tibial plateau (the flat top of the tibia that articulates with the femoral condyles to form the knee joint). 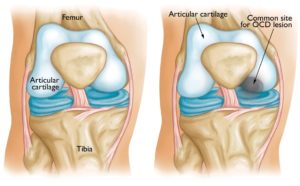 The actual cause of OCD is not known but repeated stress or trauma may be a factor.
The most common symptoms, as with so many knee injuries, is pain and swelling, particularly after physical activity. As far as imaging studies go, this type of abnormality can be seen on both plain Xray and on MRI, as the fragment of bone and attached cartilage is floating freely in the joint:

WHAT IS THE TREATMENT?
The initial treatment, especially in younger patients, is supportive care with rest and may require crutches, splinting or even a cast. Healing typically occurs within 2-4 months when this approach is successful.

If that doesn’t resolve the issue, then surgery is the next step in these scenarios (per AAOS):

Initial surgery is usually focused on securing the bone fragment and the cartilage that separated back to the main bone.  There are several ways to achieve that:

Here is an xray image of a knee after pinning of the cartilage and bone fragment:

Here is a video depicting the process of cartilage grafting for the knee (from educational video site “Your Practice Online”):

A review of three different fixation devices published in 2019 looked at long-term outcomes and no difference was noted in patient outcomes based on the type of screws or nails used, including bioabsorbable nails.  An overall failure rate of 20.5% was found.

Most studies that evaluated long term outcomes from osteochondral allograft (OCA), as shown in the video above, found that the graft survived in approximately 75% of patients.  A 2016 study published in the American Journal of Sports Medicine looked specifically at OCA for patients with osteoarthritis dessicans and showed much better results:

In Strong’s case the lesion involved the lateral femoral condyle bone in his knee and showed a 70% detachment, according to The Reporter. Strong underwent right knee surgery with Dr. Brian Michael Haus , Assistant Professor of Orthopaedic Surgery at the UC Davis Medical Center in Sacramento on July 5, 2017. While recovering from this surgery, Strong missed his senior season. According to Strong’s comments at the Senior Bowl, he had dissolvable pins placed to secure the cartilage in place. If that had succeeded, the cartilage would have adhered to the bone by the time the pins dissolved.

Strong required a second surgery in February 2021. He describes this as have cadaver cartilage added to his knee as a “tire swap” but it isn’t that simple. There are also reports (which have not been verified) that he may also have had a bone graft from his hip to his knee at that time.

While rehabbing his knee in preparation for the 2021 season, he underwent a right knee arthroscopy in August to reportedly clean out some scar tissue. He also acknowledged that he had knee swelling during the season that required needle drainage.

WILL CARSON STRONG’S KNEE BE AN ISSUE?

Based on medical literature, the second surgery that Strong had in February 2021 has a high probability of long-term success. The additional minor arthroscopy prior to this season likely showed that the graft was still in place or Strong would have required a more extensive revision that would have sidelined him for the early part of the season.

What is not clear is whether the swelling he experienced during the season was due the stress of playing while he was still recovering or if this will be an ongoing problem.

NFL teams looking at Strong as their future quarterback will obviously need to do a thorough medical evaluation and Strong’s transparency with regard to his status will certainly aid in that.  They will also need to make the determination as to whether his arm talent and instincts will be sufficient if he should lose mobility in the future. Hopefully, that will never be a concern.