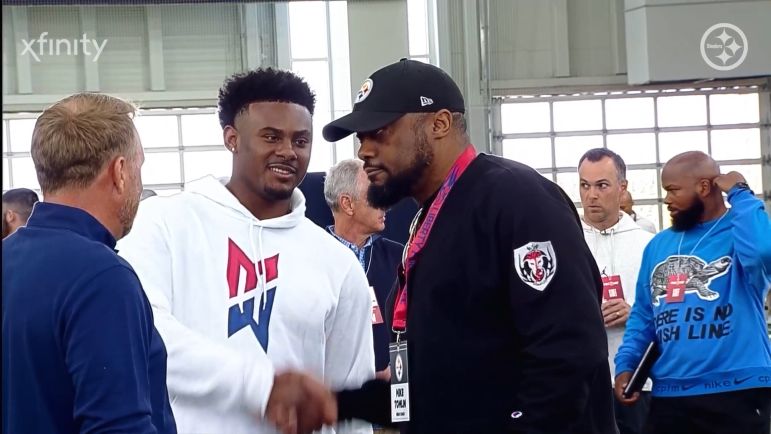 Stability is a word that gets thrown around a lot when discussing the Pittsburgh Steelers organization at a structural level. They have been owned by the same family for the entirety of their existence, through three generations. They have had three head coaches for the past 50-plus years. They have had the same general manager for two decades, and the same quarterback for nearly as long.

But that general manager, Kevin Colbert, is on his way out, following quarterback Ben Roethlisberger out the door, and that means the Steelers are facing a comparative upheaval this offseason relative to their norm, which has made it more interesting for the scouts—even the ones who bear the family name, like Dan Rooney Jr., the team’s Player Personnel Coordinator, who has been a member of the scouting staff since 1997 and loves to be on the road.

“I’ve been very fortunate and blessed as a scout to have Ben Roethlisberger here”, he acknowledged in the latest episode of The Standard, which went up on the team’s site last night. “He pretty much made my career, just in terms of being able to go out and scout and not have to worry about that position, because that position is just so huge”.

He talked about how the scouts began two or three years ago to more diligently look at the quarterback class as Roethlisberger’s career wound down, culminating into a smorgasbord this offseason “We did a little week or so called the ‘Quarterback Week’. Me, Kevin, Coach [Mike] Tomlin, a few other scouts, went to the different schools”, he said of their scouting trip for this year’s quarterback class.

“We started off here with Kenny [Pickett]. So then we went down to Liberty, Malik Willis, enjoyed dinner with him and his family”, Rooney explained of their trek. “Then we went down to Matt Corral down there at Ole Miss, and then we went to Desmond Ridder over at Cincinnati, then Sam Howell’s Pro Day was at UNC. I think those five guys, along with Carson Strong out in Nevada are probably the cream of the crop, so to speak, of this group”.

There’s a reasonable chance that one player in that list will be drafted tomorrow. If that comes to pass, you can at least rest assured that the Steelers have done their homework in scouting him, because they have been showing their work throughout this process.

“You’ve got to be a sharp guy to be able to handle the way that the defenses play in the NFL”, Rooney said about his scouting priorities for the position, “so you look for accuracy, smarts, and I really like to look for toughness and courage, so when they’re faced with adversity, are they able to lead the team?”.

These and others are the questions the scouts have been asking themselves about the likes of Pickett, Willis, Ridder, Strong, Howell, and Corral. Which one of them best profiles to be that guy, and is there more than one? We should have a better idea of what they think 48 hours from now, certainly.