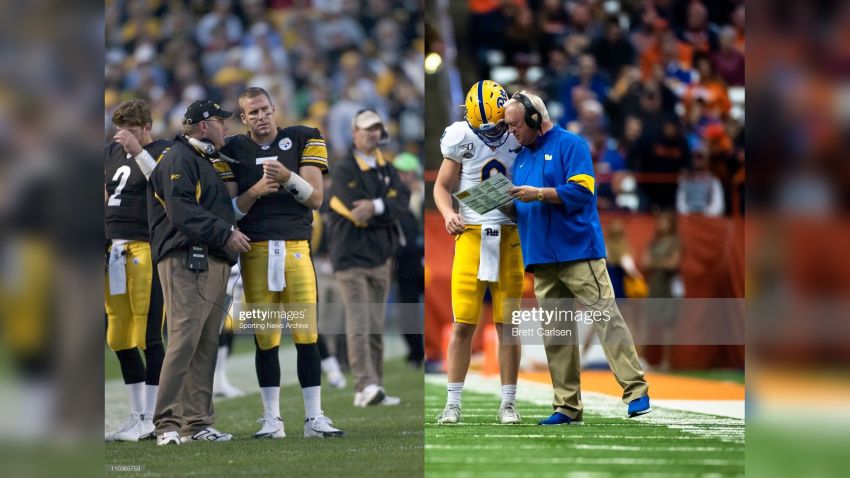 There was once a talented first-round quarterback who came out of Pitt that to this day the Pittsburgh Steelers regret not taking in the 1983 NFL Draft. They decided that defensive lineman Gabe Rivera would be a more important building block for their franchise that year at 21 overall than the guy who would be taken six selections later by the Miami Dolphins, the Panther Dan Marino.

The Panthers haven’t had a more notable quarterback since then than the one they have coming out during the 2022 NFL Draft class in Kenny Pickett, who is expected to be drafted in the first round as well—and hopes that, unlike Marino before him, he gets to play his professional ball in the same city.

Doing so, he would be following in the footsteps of a Hall of Famer with Ben Roethlisberger retiring, which is pretty much the same thing Marino would have been doing with Terry Bradshaw (who played one game during the 1983 season). Pickett, at least, has some indirect familiarity with Roethlisberger’s quarterback style.

“It’s pretty cool to be coached by Coach Whip, who had Ben, and then I got to learn from him”, Pickett told reporters yesterday. “A lot of things that he taught Ben, he was teaching me these past three seasons at Pitt. So the possibility of getting drafted there would be really unbelievable.

Not only does he have familiarity with Roethlisberger’s first quarterbacks coach, he also has a relationship with his last offensive coordinator in Matt Canada. Canada spent one season at Pitt in 2016 as offensive coordinator. Pickett was not yet on the team, but Canada was part of the recruiting process.

During his senior season in 2021, Pickett threw for 4,319 yards and 42 touchdowns against seven interceptions and a 165.3 quarterback rating, adding another five rushing touchdowns on top of that. The Panthers went 11-3, their best record since 1981 when Marino threw 37 touchdown passes. That was tied for the most in team history (with Rod Rutherford in 2003) until 2021 with Pickett’s 42-touchdown season.

He is not the only quarterback who could potentially go in the first round this year, however, with others including Sam Howell, Carson Strong, Matt Corral, Desmond Ridder, and Malik Willis. Will any of them wind up in Pittsburgh? I’m personally not betting money on it. And I also wouldn’t bet that they would have near the reason to regret passing on Picket as they did Marino.