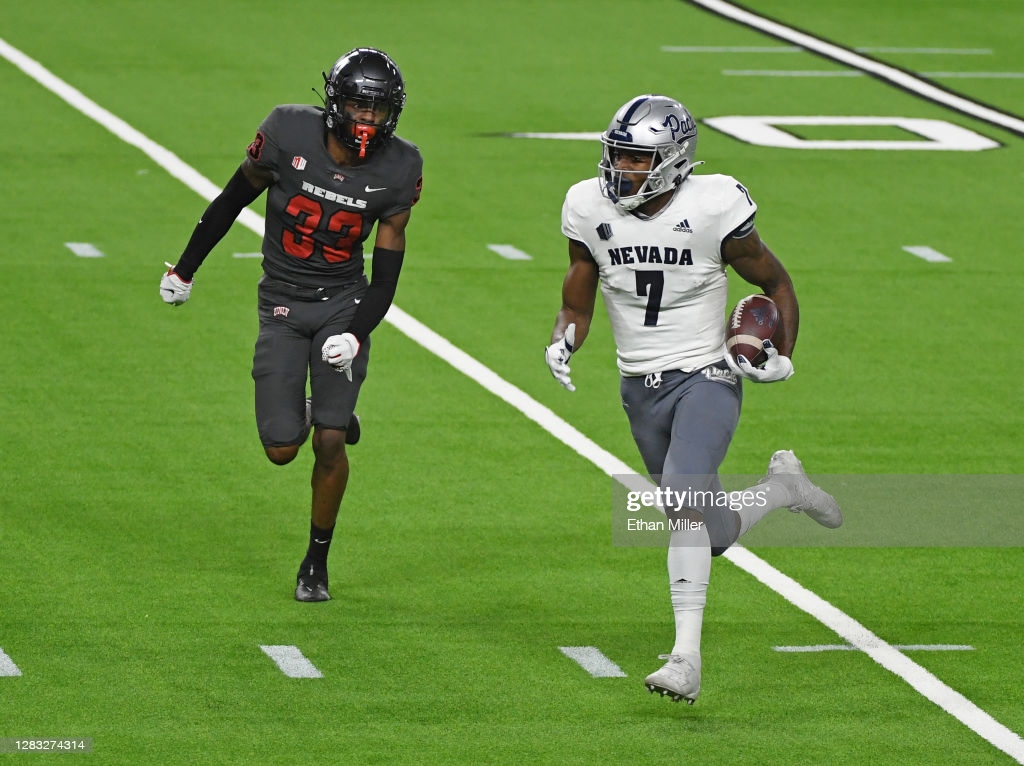 I had the opportunity to interview Nevada QB Carson Strong down in Mobile during the Senior Bowl Wednesday morning at the media breakfast. When I spoke with Strong, he came off as incredibly authentic and sincere with his answers, treating each question like a back-and-forth conversation with a friend rather than a formal interview.

He shared with me the exact issue he has been dealing with since high school regarding his knee, which Dr. Melanie Friedlander broke down in detail for Steelers Depot at the link below.

The Doctor Is In: What To Make Of Carson Strong’s Knee Issue

However, I wanted to ask Strong more about his teammate, WR Romeo Doubs. The great Dave Bryan put Doubs on my radar last spring, and I immediately fell in love with the prospect and his ability to win deep down the field. I profiled Doubs in a summer scouting series, and actually completed his pre-draft profile before going down to Mobile to watch him in-person and have the following conversation with his college quarterback.

JH: Your connection with Romeo Doubs has been well documented during your time at Nevada. Tell us a little bit more about your teammate Romeo. Just how as you as you have improved as a player over your time in Nevada, tell us a little bit about his maturation process as well and just what it means to have a player like that who has been kind of like a go-to-guy for you.

CS: Yeah, so me Romeo and Cole (Turner). We all lived together as freshmen in the dorm. We got an apartment and then a house. So we’ve lived together all four years and none of us were highly recruited guys. We all developed to get to this point. We all got better. We all improved. We all had lots of parts of our game that we need to work on. So we’ve just been grinding in the past four years together. We’ve gotten better every single year. And you know, we’re still striving to get better. None of us have even came close to our potential or topping out as a player. So you know Romeo, he’s an amazing guy. He’s got, you know, unmatched speed. Yeah, he’s gonna run a 4.4 but he’s different than other guys are on a 4.4 is when that ball is in the air, he hits a second gear. You can’t overthrow him he goes and gets it.

JH: Yeah, because Romeo and recorded the fastest time at like 21.25 miles an hour tracking that first team practice. Can you give any insight of what he’s possibly going to run when you guys go down Indianapolis and when you guys compete at the combine?

CS: Ya he’s a true 4.4 guy, but like I said he’s faster than other guys that are running a 4.4 because, you know, game speed and being able to go get the ball when the ball is in the air is different. You know, when he sees the ball in the air, he hits the second gear and he just goes and gets it and, you know, that’s a unit of talent.

The question for me, as well as Dave and Alex brought up on The Terrible Podcast has been what Doubs’ timed speed will be. There is no doubt he wins down the field regularly at the college level, routinely staking defenders and creating separation down the field as a deep threat.

Romeo Doubs clocked in at 21.25 MPH at the #SeniorBowl yesterday, which was the 2nd fastest of the day behind DB Josh Williams time of 21.75 MPH pic.twitter.com/2dBeSjPCll

Still, after speaking with Carson and watching practice, I can see where Doubs’ clocked speed could match up with his play speed. As you see in the clip above and if you check out his draft profile, Doubs possesses that acceleration to pull away from defenses both on deep balls as well as on screen passes and quick hitters over the middle. However the part that stood out from Strong’s answer “he just goes and gets it” applies to more than just straight-line speed. Doubs showed his ability to win over the middle during the week as well, having the size, strong hands, and concentration to haul in the reception even when getting hit by a defender.

Desmond Ridder continuing to look good throwing on boots. Likes to set his feet, not continuing to boot into pressure, and let it go. This time shows some nice touch hitting Nevada’s Romeo Doubs for a first down. #SeniorBowl pic.twitter.com/ZYC8hLTNV3

Doubs may have been profiled by some as just a deep threat who may not generate the same separation at the NFL level as he did in the Mountain West Conference, but he has showed me during his week in Mobile is is more of a well-rounded receiver than I initially thought. He can win vertically and over the middle, but he also showcased his ability to win the jump ball in Senior Bowl practices, pulling off his best James Washington impersonation but snagging the ball in contested coverage with his big 10 1/8-inch hands.

Do I think that Doubs is going to set the turf in Indy on fire with a blistering 40 time? No, but I do expect his to run in the mid-to-high 4.4s and test well in the other drills while showcasing a  refined game thanks to his improvement from last season to 2021. Given the dire need for speed on the outside and the likely loss of James Washington and JuJu Smith-Schuster in free agency, Doubs could be that guy who can come in and play the Washington role (albeit bigger, longer, and faster) and help keep defenses honest whilst being able to do whatever the offense asks of him as a weapon in the passing game.

What are your thoughts on Carson’s Strong’s comments on Romeo Doubs? Do you think that he is a “4.4 guy” like his quarterback is making him out to be? Do you think that Doubs has refined his game to be more than just a deep threat at the next level? Would you want to see him in Pittsburgh next season? Please leave your thoughts in the comments section below and thanks again for reading!