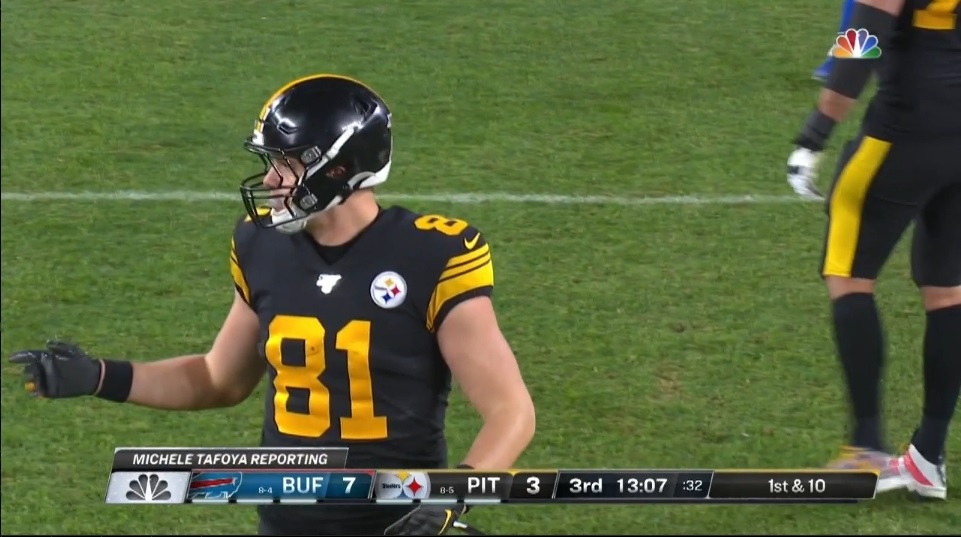 He was linked to Pittsburgh since the very beginning of the 2021 draft season and after hundreds of mock drafts and jersey swap graphics of him in black and gold threads, Najee Harris in Pittsburgh actually happened. He did not disappoint either. While many claim teams shouldn’t draft first-round running backs, Harris’ unique skill set of making something out of nothing and creating 2-3 yards when nothing is there helped this Pittsburgh team limp to its 9-7 record.

It’s honestly hard to picture what this offense would have looked like without the workhorse that was Harris. We got a short glimpse in the few quarters that he was out in Week 18 with an elbow injury, and simply put, it wasn’t pretty. This team went as far as Harris could take them behind a slapstick offensive line, rookie offensive coordinator, and passing game that did nothing to open up the run game. Harris is certainly not without his own flaws, but for a rookie running back that took over 80% of the team’s offensive snaps in the season natural lumps will happen.

With how abysmal this offense was throughout the entire year, the only other real option here was Diontae Johnson who I think proved he could carry the load as number one receiver in the NFL, but his second half of the year made it hard to give him the vote here.

If you’re the odds on favorite to be the NFL’s defensive player of the year, it’s kind of hard to not be the defensive MVP of your own team. While Cam Heyward did his best to try to trump Watt for the top spot, it’s too hard to ignore the overall impact Watt had on opposing offenses every time he stepped on the field. When he’s not on the field, you notice the difference.

Similar to that of a Troy Polamalu or a Ryan Shazier it seemed every time the defense was in need of a big play, he was there to make it.

ROOKIE OF THE YEAR: NAJEE HARRIS

Not much of a surprise here. While the Steelers got some great snaps from other rookies such as Pat Freiermth, Dan Moore Jr., and Tre Norwood, it’s hard to deny Najee Harris’ this award. He stepped off the bus and into the Steelers starting lineup. Over 350 touches and 1600 total yards later he looks to be one of the faces of the franchise for years to come.

There are tons of ways to go with this one, but the former quarterback turned tight end at Michigan, has turned into a player. Personally, I was highly critical of pick coming out and he’s proven me wrong. While you’ll likely never want him to be a starter he’s come into his own as a blocker and receiver in his third season. This season, while he only had 19 catches, he served as a safety net for Ben Roethlisberger on numerous occasions. If it weren’t for seeing Gentry’s development this year I’d argue the Steelers would again be in need for talent at the TE position even after hitting on Pat Freiermuth this season. I can see Gentry being a solid TE2 for a few more seasons in Pittsburgh.

This may be a tad unfair, but Kevin Dotson simply could not stay on the field this year. After a rookie season that landed him on Pro Football Focus’ All-Rookie Team, many expected him to step up and be the anchor to this Steelers offensive line that was overgoing a complete transition. While he did start the first nine games of the season his performance could be best described as “alright.” Besides from a few reps that showed some of the same flashes from his rookie year, there wasn’t much there to warrant the same excitement as he had the last offseason. Hard to knock a guy because of an injury but him not being activated from the Reserve/Injured List before the end of the season simply added to my disappointment. Dotson’s story is far from over and I’m hoping he and Dan Moore Jr. can be the start of something for this Pittsburgh offensive line as it goes into rebuild mode again this offseason.

PLAY OF THE YEAR: PUNT BLOCK TOUCHDOWN VS BILLS

We have to go all the way back to Week 1 for this one, but I truly can’t think of a more exciting play in 2021. With the Steelers clinging to a 13-10 lead halfway through the 4th quarter, it didn’t look like the offense was going to be much help the rest of the way (foreshadowing for the rest of the season). So gum chewing, Danny Smith, went into his bag of tricks and dialed up a punt block at the perfect time. Newly added, Miles Killebrew, was able to squirt through and block the punt. Ulysees Gilbert III was able to pick it up and jaunt in for the score, and the eventual nail in the coffin.

Miles Killebrew of @SUUFB_ got a HUGE punt block for the @steelers! 👀 #ExperienceElevated

For the Steelers to go into the hostile environment that is Buffalo and beat a team that was just in the AFC Championship the year before, it shocked a ton of people and maybe put too high of expectations on this team. All in all, think it was the most exciting play of the year.

I’m obviously not in the building day to day with these players and coaches so I can only go with the on-field product. After going through each position and thinking about the development of each group from last year to this year, this seemed like the only choice. I don’t want it to seem like Alfredo Roberts is winning by default, instead, I want to focus on the fact that he did his job well enough to make it noticeable as a third-party outsider. Roberts was instrumental in the team’s choice of Pat Freiermuth in the second round and not only did that showcase his evaluation skills but he was able to help develop the rookie into a quality starter. Going back to my “Biggest Surprise,” Zach Gentry, Roberts played a huge role in his steps forward into true TE2. Great job by Roberts in 2021. I think that room will continue to elevate their play with him at the helm.

Isaiahh Loudermilk is one of the more forgotten rookies when talking about this Pittsburgh Steelers 2021 class. He was thrown into the fire probably more than he should have been this year due to injuries and he didn’t look completely overwhelmed. Even had a few flashes in the run game. The now-former defensive coordinator, Keith Butler, said, “he reminds me of a young Cam Heyward.”

Rookie DL Isaiahh Loudermilk has the makings of an old school, two-gapper. Clips of his run defense against the Chiefs. Controlling blocks, finding the ball, finishing the play.

While that may be some hyperbole, he does seem like a guy that could develop into a stalwart on this Steelers defensive line as he continues to develop.  Even if he becomes half the player Heyward is while being mentored by him, he can be a quality starter. With the future of Stephon Tuitt up in the air, Loudermilk may be looking at a much bigger role in 2022.

If you’ve been a Steelers fan long enough, you know just how difficult it has been for this team to find quality players at the cornerback position. While no one would have guessed it through the first half of the season, Kevin Colbert may have found a gem in Ahkello Witherspoon. After barely seeing the field for the first 10 weeks of the season, Witherspoon was slowly pressed into a starting role by Week 13 and showed the team just what they were missing. Through the last 6 games of the season, he allowed only 9 completions on 27 targets, 98 yards, 3 interceptions, 0 touchdowns, and a 5.4 passer rating.

That type of play at the cornerback position is not something seen often in Pittsburgh and I’m hoping they can prioritize him in the offseason to pair with Cam Sutton in this secondary.

We finally got to see the 28-year old defensive lineman’s full potential over the course of the season in 2020 that included 11 sacks, 25 QB hits 45 tackles, and 10 tackles for loss for one of the NFL’s most stout defenses. He added one more weapon for opposing offenses (and quarterbacks) to worry about across this Steelers defensive line that already includes the likes of Cam Heyward and TJ Watt. Tuitt’s return was questioned in just about every Mike Tomlin press conference with the same answer each time. While Tuitt did have knee surgery early in the season, his situation is much bigger than football as he is dealing with the tragic passing of his brother. Keith Butler mentioned this week he did not know if he would be back with the team. I know his teammates would welcome him back with open arms, but at this point, I just wish the best for him as a person.