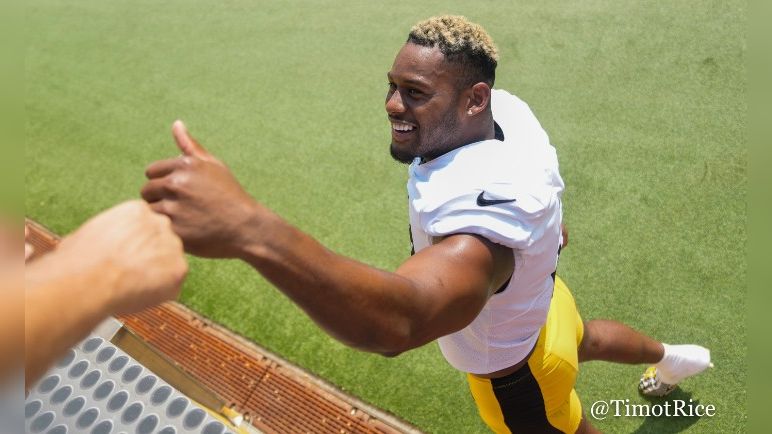 Steeler Nation got some good news Thursday afternoon with the team announcing WR JuJu Smith-Schuster returned to practice. Though he remains on injured reserve and his odds of playing Sunday night against the Chiefs aren’t high, head coach Mike Tomlin isn’t ruling him out completely. That’s what he told reporters following Thursday’s practice.

Tomlin was first asked on Thursday if he is surprised that Smith-Schuster is now back on the field again. He said he wasn’t surprised at all.

“He’s worked hard in rehabilitation and has gotten himself to this point and we simply started the 21-day window,” Tomlin said. “We’ll look at him and see how he feels and check his level of conditioning. Things that we normally do when people get into that 21-day window. Kevin Dotson was probably the latest example of that prior to JuJu. Good to have him out here. But it’s just part of the process.”

How much was Smith-Schuster able to participate on Thursday?

“I didn’t quantify it to be quite honest with you,” Tomlin said via Steelers.com. “It was just a start.”

Will Smith-Schuster need to wear something to protect his repaired shoulder while he’s practicing?

“I didn’t even ask, to be quite honest with you,” Tomlin said. “It’s just about getting him on the grass. It’s good to have his energy out here. It was good day.”

So, will Smith-Schuster be an option for Sunday night against the Kansas City Chiefs. Is there a chance he will get activated from the Reserve/Injured list by Saturday night?

“I don’t know that,” Tomlin said. “Like I said, we just started his 21-day window and what transpires out here and a lot of other questions are part of the equation.”

NFL Network’s Taylor Bisciotti reports Smith-Schuster has a legitimate chance to play this weekend, though her tweet-port is pretty open-ended.

I’m told that depending on how he feels, he could return for this weeks Wild Card Game against the #Chiefs

Fellow Steelers wide receiver Diontae Johnson said on Thursday that it looked like Smith-Schuster was ready to step into a stadium.

“I feel like he looked smooth,” Johnson said of Smith-Schuster. “He’s still got great hands, natural catcher. Big hands. Strong guy. Just being able to see him run around and just show that he’s still JuJu at the end of the day, it’s exciting.”

Johnson was surprised to see Smith-Schuster back practicing again.

“I was surprised to see him out there today, too,” Johnson said of Smith-Schuster. “In the locker room I was like, ‘Yo, you getting ready or something? Like, putting on these cleats?’ I’m happy that he’s back. Like I said, if he gets a chance to play, I’m going to be excited for him just to see him do what he do, which is make plays.”

And Smith-Schuster himself reacted to the news.

He hasn’t played since October 10th, a Week 5 win over the Denver Broncos. Smith-Schuster suffered a regular season-ending shoulder injury in that game. But he’s obviously made enough progress to get back on the practice field. How close he could be to returning to playing on gameday is anyone’s guess. The fact he had an upper body injury should mean he’s in a better place from a conditioning standpoint than he would be if he suffered, say, an ankle fracture the way Tyson Alualu did.

Per NFL rules, Smith-Schuster is eligible to be activated at anytime. The team will have up to 21 days to activate him off IR and place him on the 53-man roster. Returning today after so much time off makes his odds of playing Sunday night long but it would foolish to put them at zero.

But if the team thinks they can even get 15-20 snaps from him in a do-or-die game, it might make their approach more aggressive. Next week is far from guaranteed, and if Smith-Schuster is healthy enough to contribute meaningful snaps, along with some playoff adrenaline to shake off the rust, he could suit up for Wild Card weekend.