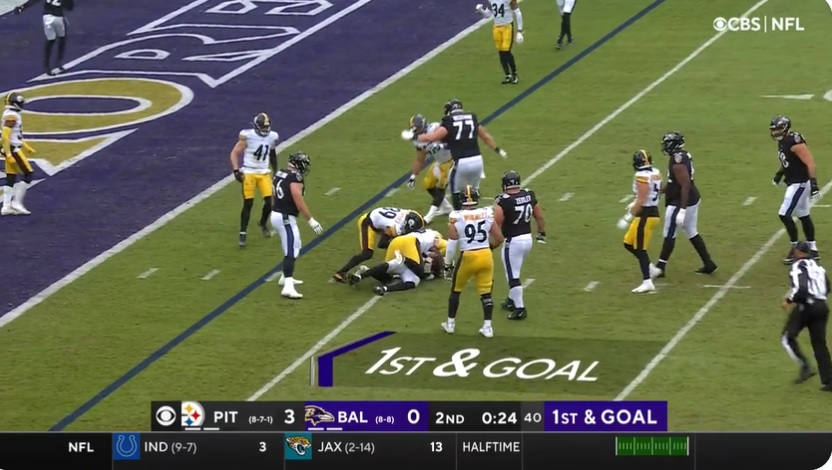 Winners and losers from the Pittsburgh Steelers’ 16-13 overtime win against the Baltimore Ravens in their 2021 regular season finale.

T.J. Watt: What more is there to say about Watt, other than hopefully saying “Defensive Player of the Year” winner a couple weeks from now. Watt’s dominant season continued Sunday with multiple quarterback hits, a sack, and pass deflection. His sack tied the NFL record, and he could’ve broken it with a little bit of luck. He had a sack negated by an aborted snap and a potential half-sack erased by a Cam Heyward personal foul.

Still, Watt’s season was an all-timer. All the kudos in the world to him.

Cam Heyward: Penalty aside (which was legit, like it or not) Heyward was his typical good self. He can’t play 11-man run defense himself but he did his job, getting off blocks, applying pressure, and running to the football. He’s been an elite player for years, but 2021 was arguably his best season. To me, it was.

Ray-Ray McCloud: He’s been the butt of a lot of jokes this season and sure, the targets he’s seen have been…excessive. He was solid in the return game, kicks and punts, and had a clutch 20-yard catch leaving his feet in the middle of the field on the Steelers’ go-ahead drive. McCloud followed that up with a 4th and 8 clutch catch late in overtime.

Minkah Fitzpatrick: He had at least one missed tackle and we’ll have to look at the long TD run where there felt like a missed assignment, but Fitzpatrick made his clutch-est play of the year, punching the ball out of WR Hollywood Brown’s hands on the Ravens’ final drive of regulation. Incredible close and finish. He fails to do that, and Justin Tucker is basically in range. Insanely good ball skills.

Ben Roethlisberger: It wasn’t a pretty first half. Not a pretty game overall. But it was vintage Ben. Lead the team on the go-ahead fourth-quarter drive, Roethlisberger going 7/8 for 54 yards and the TD to Chase Claypool. And he did it in overtime, too, in classic fashion.

Pat Freiermuth/Najee Harris: Harris missed most of the first half with an elbow injury, but respect to his toughness to come back in. Had a great one-handed snag in OT that probably saved a pick-six. Freiermuth’s effort and quickness post-catch has really been impressive. Bright future with those two guys.

Chris Boswell: 3/3 on the day with the game-winner from 36 yards out. Gotta love Boz.

Pressley Harvin (and really, Mike Tomlin): Why Tomlin decided to go with Harvin over Corliss Waitman is a question he’ll have to answer in his post-game presser. No explanation will probably be sufficient. Waitman had punted well in Harvin’s absence the last two weeks, and it would’ve been entirely justified to keep Waitman for the final regular season game.

Instead, Waitman was made inactive while the team turned back to Harvin. His struggles continued with a JV, 33-yard punt. He had several that were fair caught at or around the 20, but they weren’t field-flippers downed, say, inside the ten. In a field position-heavy game, that was a big loss. Harvin’s rookie season was rough, and ends on a low note.

O-Line Penalties: Haeg got the nod at left tackle for the injured Dan Moore Jr., who missed his first game of the season due to an ankle sprain. Haeg’s play was good enough for the first three quarters. But his hands to the face penalty after getting beat in the fourth quarter erased a good catch and run (with a stiff arm) by Benny Snell with the Ravens leading 10-6. Essentially, a 39-yard net penalty, putting Pittsburgh in a 2nd and 25 and a punt two plays later. I try not to put linemen or players on this list for one bad play, but man, that one hurt.

Also Haeg’s start will probably push him over the 25% playing time threshold, meaning the Steelers won’t get a fifth-round comp pick for the 2022 Draft.

Penalties by John Leglue and Chukwuma Okorafor ultimately didn’t hurt the Steelers on their go-ahead TD drive. But they’re just as frustrating and hurt this team’s chances.

Inside Linebackers: Looking at Robert Spillane, Devin Bush, and Joe Schobert. Can’t pin all the run defense issues on them, and no doubt, the D-line plays a role in how good the off-ball guys look. Henry Mondeaux, again, struggles to hold the point of attack. But no one got off blocks and they couldn’t match the Ravens’ pullers, a common theme again and again.

Baltimore ran the ball for over 200 yards, the fourth such game Pittsburgh’s allowed this season. Unacceptable numbers, regardless of injuries. The Steelers will need to make changes here in the offseason, revolving around these inside ‘backers.