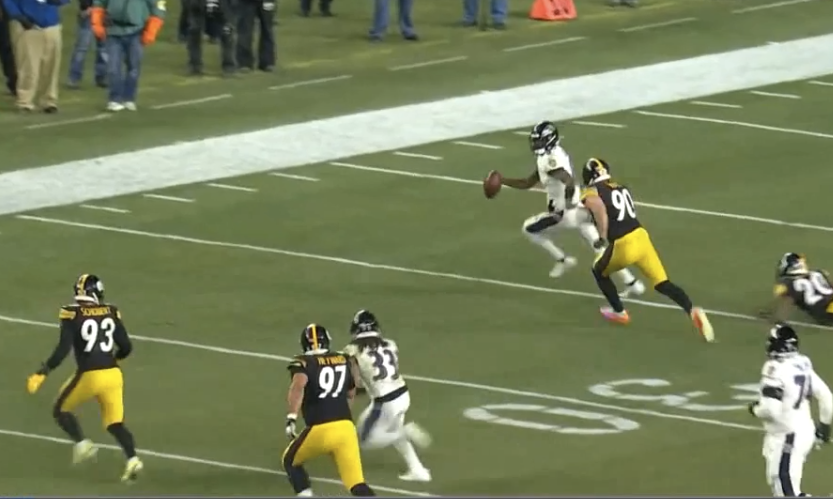 1. Claypool and Johnson Win Their 1v1s

As we noted in our Saturday X-Factor article, Steelers’ wide receivers have to make plays this week. Ones they failed to do in Monday’s narrow win, a game that set back quarterback play a solid 50 years. Literally one of the least efficient passing displays in NFL history. Both guys had chances to win 1v1 and failed against the Browns, Claypool especially, but Johnson did not play well either.

Baltimore has had a ridiculous amount of injuries in their secondary, particularly at corner. No Marlon Humphrey, no Marcus Peters, not even interception-leader Anthony Averett. Johnson and Claypool have matchups they should and need to win.

For the season, Pittsburgh’s first down offense ranks 31st at 4.2 yards per play, far away from 30th place (4.7) and a tenth ahead of the lowly Houston Texans (4.1). Generally, that means some big plays on first down to help skew the numbers but overall efficiency as key. No team wants to go into a game being in 3rd and 7+ but the Ravens have the #3 third down defense in football and I don’t think there’s a better DC at creating chaos in those moments than Baltimore’s Wink Martindale.

No defense has more sacks than Pittsburgh’s 52. No offense has been sacked more than Baltimore’s 54. See a trend here? This game is setting up favorably for the Steelers from a pass rush perspective. But they gotta get the job done. The full-team effort of last week would be a welcomed return, not necessarily to the nine-sack performance but a game where Watt and Heyward and Highsmith and someone else are getting in on the action. Chris Wormley had a heck of a revenge game against them in Week 12. I’d love to see an encore against young QB Tyler Huntley.

A standard one to chalk up in these games. Chris Boswell doesn’t get talked about the way he deserves because Justin Tucker exists, overshadowing him from just a couple hundred miles away. Don’t forget about punter Sam Koch, one of the best in the business for quite some time. We don’t even know who will punt for Pittsburgh tomorrow though the tea leaves indicate it’ll be Corliss Waitman.

With Huntley at QB for Lamar Jackson, the Ravens’ run game hasn’t changed much. Their pass game, however, has been tweaked. It features shorter and more timing-based concepts. Linebackers have to be able to get depth and take away quick throws while DBs need to be able to drive on the football. This could shape up well for CB Ahekllo Witherspoon, who drove on the ball well against the Browns’ underneath throws Monday night.

3. Offense Loses On Third Down

Like I mentioned above, Baltimore comes into the game with a top-three third down defense. Pittsburgh’s third-down offense has been in a major funk lately, struggling to convert above one-third of the time. Against the Browns, they finished 5-18 and could not convert through the air. That starts with winning on first down, as is my point in the “will win” section but this team will need to find a way to win on the occasional 3rd and 6 or 3rd and 8.