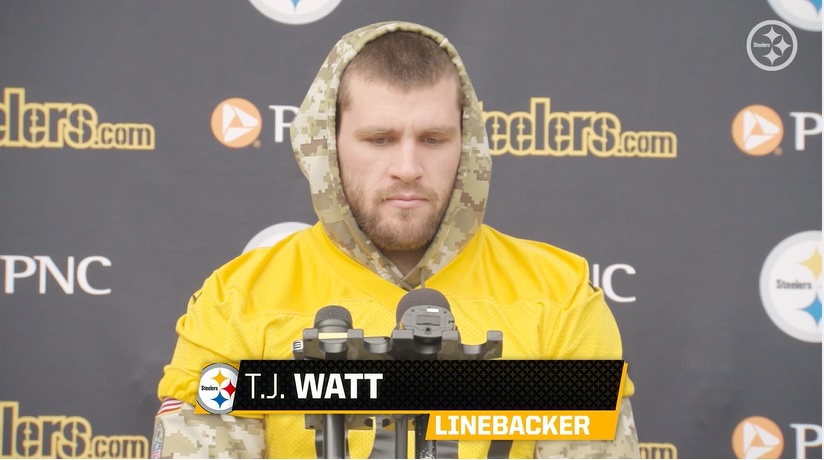 At halftime of the Week 18 regular season finale against the Baltimore Ravens, Pittsburgh Steelers’ star All-Pro pass rusher T.J. Watt was like many fans in the moment: Checking his cell phone to see if he passed New York Giants’ Hall of Famer Michael Strahan’s single-season sacks record of 22.5.

Appearing on The Dan Patrick Show Wednesday, Watt let slip that he did, in fact, check his cell phone at halftime of the Steelers-Ravens game that was knotted at 3-3 in an attempt to see where he stood. That, according to league rules, is a violation that could lead to a fine.

#Steelers LB T.J. Watt admitted on the @dpshow that he used his cellphone during halftime of the #Ravens games in hopes to find out if he broke the single season sack record.

According to league rules, that is prohibited.pic.twitter.com/SWTBP0BV0A

Watt appeared to have tied the record in the first quarter when he not tackled Ravens’ quarterback Tyler Huntley behind the line of scrimmage and forced a fumble in the process, but that play was deemed an aborted one due to a fumble on the snap from center Bradley Bozeman, resulting in Watt’s play not counting as a sack.

This is the early play that T.J. Watt was not given a sack on. #Steelers pic.twitter.com/3adSWwraPU

In real time, Watt didn’t know that because, as he says, coaches told him he had tied the record. Then, late in the first half Watt sacked Huntley in the red zone — this time it being a true sack — which led him to believe he had set the record. Just to be safe, Watt wanted to check for himself at halftime.

“Halftime, I thought I had two,” Watt said to Patrick Wednesday. “But then I checked my phone because our D-line coach [Karl Dunbar] was saying to me, ‘they’re giving it to you, they’re giving it to you; you have it.’ A couple of other guys said that no I hadn’t, so I checked my phone at halftime — which I never do — and then J.J. [Watt] in my brother’s group chat said, ‘they only gave you one, you gotta go get another one.’ I tried like hell to get another one in the second half, but they were running the ball a whole bunch, so it wasn’t in the cards.”

Though he wasn’t able to break the record in the second half, the 2021 season finished rather well for Watt, as the Steelers defeated the Ravens in overtime and punched a ticket to the playoffs as the No. 7 seed. Individually, Watt earned unanimous Associated Press First Team All-Pro honors for his dominant season off the edge, and should add more hardware to his trophy case later this year: The NFL’s Defensive Player of the Year.