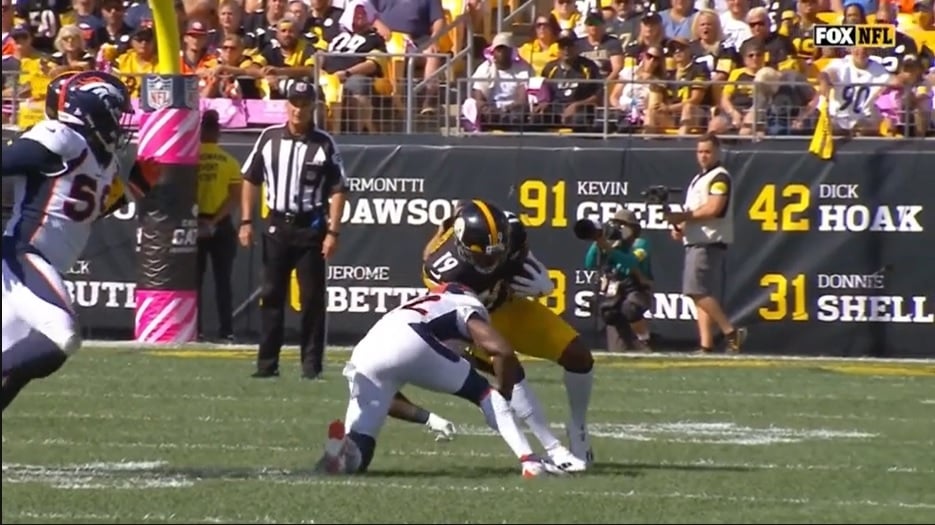 While the Pittsburgh Steelers allowed wide receiver JuJu Smith-Schuster to return to practice on Thursday, it’s starting to sound like the former second-round draft pick out of USC won’t be playing Sunday night in the team’s AFC Super Wild Card game against the Kansas City Chiefs.

According to Gerry Dulac of the Pittsburgh Post-Gazette on Thursday might, the Steelers are not planning to play Smith-Schuster right now, even though he is reportedly healthy enough to play. Smith-Schuster has not played since suffering a shoulder injury in Week 5. He had surgery not too long after suffering that injury and was then placed on the Reserve/Injured list.

JuJu Smith-Schuster @TeamJuJu is healthy enough to play and Steelers are hoping he can play, but they are not planning on it right now, per sources.

That report by Dulac sure doesn’t sound like it is worded right. Even so, I would be surprised if Smith-Schuster does wind up playing Sunday night against the Chiefs. It just feels too soon for him to return and especially at the end of a week where he would only have had practiced twice.

Based on what Steelers head coach Mike Tomlin had to say on Thursday about Smith-Schuster, the team probably just decided to open the 21-day window on Smith-Schuster this week to get him moving around again and then go from there. At no point during Tomlin’s short Thursday press conference did it sound like there is a good chance that Smith-Schuster will play Sunday night against the Chiefs.

If the Steelers can beat the Chiefs Sunday night, and assuming they do so without Smith-Schuster being activated, perhaps this will be a chance the wide receiver can play the following week against the Tennessee Titans in the Divisional Round.

We will get more of a definite on Smith-Schuster come Saturday at 4:00 p.m. as that is the deadline this week for the Steelers to activate the wide receiver to the 53-man roster from the Reserve/Injured list. While stranger things have happened before, I wouldn’t expect Smith-Schuster to be activated on Saturday.