It’s the first day of 2022 & Heading up to the Burgh in a few minutes. Looking forward to seeing Ben play Monday night! #HereWeGo #Steelers pic.twitter.com/tLlmVKPkiF

Going into the game, I believed that Ben did not know his plans beyond 2021 and it would wait until season’s end. Such an emotional game, the fans chanting “Thank You Ben” and even some “One More Year” after the game. But Ben taking a lap around the field then sitting down on the bench. Later joining his family. I’m convinced. Ben’s playing career ends following the 2021 season.

I am just so happy to have witnessed it in person. Hard to describe the atmosphere at Heinz Field. My best comparison is to a playoff game ending in a victory but without the finality of a farewell. Playoff wins still have the hope of a championship season. While technically that is still a possibility if not a probability, the excitement in the air was the appreciation of Ben Roethlisberger’s 18-year career ending. For all your contributions to the Pittsburgh Steelers. Thank you, Ben.

There were certainly tribulations along the way. But one thing Ben requested of Pittsburgh fans at his lowest point resonated with me. Basically, Ben requested, “I cannot change my past actions. I can only ask that you judge me on my actions from this point forward.” While some cannot forgive, most fans embraced this sentiment and gave him another chance. From all evidence he has been a great Steelers player, and good father and husband. Again, I thank you Ben. 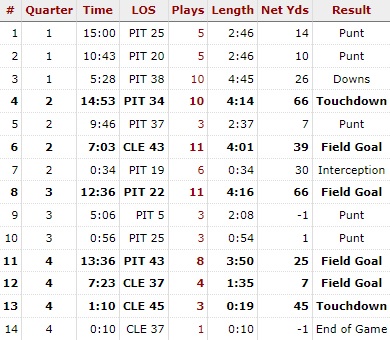 This was not one of Ben Roethlisberger’s better passing games. He netted only 123 passing yards with one short touchdown pass to Diontae Johnson.

Najee Harris rumbled for 188 rushing yards including a 37-yard touchdown to drive the spike into the Browns.

The offense dominated time of possession by 35 minutes to 25 for the Browns. That resulted in 81 offensive plays to the Browns 71. Although the Steelers scored only two touchdowns, Chris Boswell kicked four field goals to at least garner 12 points on four stalled drives. 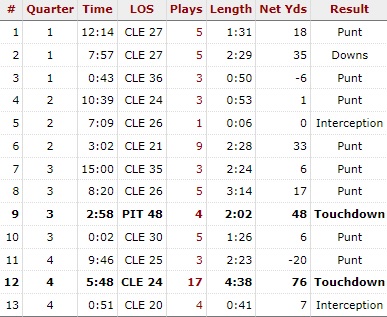 The defense played very strongly. I thought Cleveland would attack the middle with Nick Chubb since Robert Spillane and Marcus Allen started at inside linebacker with Ulysees Gilbert III spelling them. But the Browns only ran the ball 20 times in a close game. T.J. Watt led the way with four sacks. But Alex Highsmith added two with Cam Heyward, Henry Mondeaux and Derek Tuszka adding one each. Watt and Heyward tipped two passes apiece and Isaiahh Loudermilk defended a fifth pass as the defensive line took away the passing lanes from Mayfield.

NFL officials penalized Joe Haden on a fourth and 19 play but honestly, I did not see it. The pass nowhere close to the receiver but will defer to the folks that review the all-22 to determine if the call was appropriate. Ahkello Witherspoon and Tre Norwood ended Cleveland drives with interceptions.

Looking back at Tre Norwood's INT that got Roethlisberger on the field for one final kneeldown. It was Minkah Fitzpatrick who made the play.

Ran through Austin Hooper to separate him from the ball and Norwood picked it off. #Steelers pic.twitter.com/oLU81ATKYH

Whenever a team must punt eight times, it usually indicates a strong defensive effort.

Renegade on Monday Night against the Browns. It worked. #HereWeGo pic.twitter.com/WwXk2tQgWQ

Chris Boswell kicked off seven times. He reached the end zone four times but only one touchback. Cleveland tried to return the ball including one from three yards deep that reached the 24. The coverage unit played well forcing Cleveland to start behind the 25 on four of seven kickoffs. Brown’s average starting position was their own 25-yard line.

Chase McLaughlin kicked off three times. Ray-Ray McCloud allowed the first two to bounce in the end zone for touchbacks. Cleveland attempted an onside kick late in the game that Minkah Fitzpatrick fielded cleanly at the Browns 45-yard line. The Steelers average starting position was the 35.

Pittsburgh conservative on kickoffs while Browns gambled. The onside kick plus the Steelers coverage team prevented the Browns from splashing on special teams.

Corliss Waitman punting in his second game. He caught a high snap in the end zone and punted 53 yards. A key play in the third quarter. Justin Layne committed two penalties on punting plays. While he did not pin Cleveland deep, Waitman’s five punts helped Pittsburgh control field position.

Dustin Colquitt punted eight times. The same Colquitt who played in Pittsburgh last season. Ray-Ray returned five of eight punts. McCloud had some good returns but muffed one at the five-yard line. The Steelers special teams almost blocked a couple Colquitt punts. One went out of bounds in Pittsburgh territory after only going 21 yards.

Pressley Harvin is back but Waitman earned another shot in Baltimore. The penalties, McCloud’s muff, and Kuntz high snap in end zone in a close game gives the Browns an edge.

Chris Boswell perfect on a frigid day. His 50- and 48-yard second half field goals helped solidify the Steelers lead.

Chase McLaughlin made both extra points. But with Browns playing catch-up attempted no field goals.

Boswell’s 12 points on field goals the difference in scoring.

The Steelers accomplished three of five keys to victory. Overall failure on first downs but Najee Harris ran successfully 56.25% on first down. First down pass plays need reworked. Only two of 14 successful. Defense strong on third and long.

Rye Stye led the way with an observation on the center play. “Hassenauer out there actually moving guys and holding his ground.” Many folks responded with likes and agreeable replies.

Folks really liked the Steelers Depot own Alex Kozora greeting us at the start of game. “Appreciate you all being here! Enjoy tonight.”

The Steelers second drive saw some miscues. The_immaculatedeception didn’t miss them. “Dropped pass, bad snap, Claypool bad angle, false start… this team does nothing to help Ben and in fact make it harder on him… all year.”

Danny Porter liked the defensive stars. “97 & 90 came to play.” While CoachCot saw a star in the making. “Loudermilk may be a starter before long.”

As game tilted in Pittsburgh’s favor. DLed said, “If this keeps up Ben should pull off his jersey and gloves and dance into the end zone and off the field.”

Jaybird captured some of the emotion in the game. “Starting to feel a little a sadness. 80% of it is knowing this is Bens last game. The other 20% is knowing how bad we might be without him.”

Steely McBeam loving the defense and especially T.J. Watt. “I’d like to see Watt get at least one more sack this game.” He almost did if not for a blatant hold late in the game.

The_immaculatedeception caught some readers off guard. “There’s a lot of ex-Steelers in attendance tonight… including Chuks Okorafor and Trai Turner :P.”

Alevin16 is old school. “I really miss the days when we literally could tell the other team we were running, and they still could not stop us.”

Chris92021 lamented on what could have been. “Not running the ball once inside the 4-yard line was stupid. I get it, Roethlisberger is gonna go Final Night Kobe Bryant on us tonight if he can, but we need to secure a win before trying to get cute. As I wrote in the previous thread, I don’t care if the Browns are mentally checked out. Our defense needs this. They now need to do it for 2 more quarters this evening. This also needs to be Justin Layne’s last game at Heinz Field. The coaching staff is beyond stupid for not playing Hass earlier. Dude is taking out two men on run plays more than once. Green might be a good guard someday, but I swear we would be 9 wins right now if Hass started all season. Just win tonight. I want week 18 to matter. And go Jaguars lol.”

I’m sure there were a lot of comments appreciating Ben’s last game at Heinz Field, but these comments are what bubbled up to the top based on likes and replies. Appreciate everyone keeping the Steelers Depot Live Update and Discussion Threads a vibrant exchange of Steelers conversation on gamedays.

The stadium rocked and hoped the television coverage captured it. Did I say thank you, Ben?

Ben finished in Heinz the way his career started. Hand off the ball to control the clock and rack up running yards. Najee Harris hammered the Browns. His decisive running culminated with the 37-yard touchdown run. Not sure if it was new offensive line coach Chris Morgan, J.C. Hassenauer playing center in lieu of Kendrick Green, a change in offensive game plans, or a combination but the offensive line performed better in my opinion. Ray-Ray McCloud underappreciated in my opinion. His level of effort in getting open and blocking when not receiving earning him snaps. Beautiful that Ben ended his career at Heinz Field in the victory formation.

The defense rocked Mayfield. Nine sacks, two interceptions and held Chubb to 58 rushing yards. T.J. Watt locked up defensive player of the year with his performance unless there are shenanigans at play. Cam Heyward very solid on the line batting two passes down. Isaiahh Loudermilk following his lead with a bat down of his own. Plus, two takeaways by Ahkello Witherspoon and Tre Norwood. Witherspoon coming on strong to earn a nice contract in 2022. Hope he remains in Pittsburgh.

The windchill brought the temperature to 19 degrees Monday night. A bit warmer than Chris Boswell’s blood, who iced the Browns with 12 points off four field goals. Corliss Waitman earning a hot to take over as punter. The offseason battle between he and Pressley Harvin will be interesting. Danny Smith needs to clean-up those penalties.

One more regular season game. On the road to Baltimore. Win it and with a little help the season could extend into the playoffs. Not a probability but a possibility. Go Jags!

I always like to offer a music selection. Ben Roethlisberger played his last game at Heinz Field. This week, he’ll be on the road one more time in the regular season to play Baltimore. Here is On the Road Again by Canned Heat.