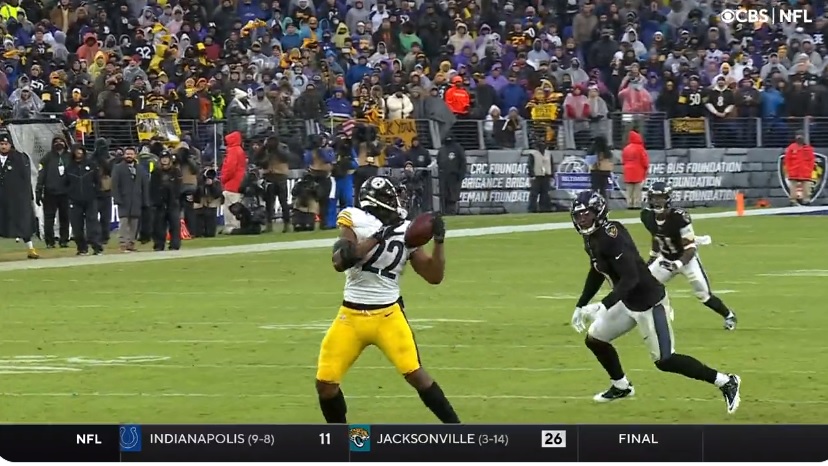 The last time the Pittsburgh Steelers and Baltimore Ravens squared off in the 2021 regular season, the Steelers’ defense and special teams turned in the second-worst tackling performance of the season in a 20-19 win.

Needing a strong performance on Sunday inside M&T Bank Stadium in Baltimore for the regular season finale with a playoff berth on the line, the Steelers — for the most part — delivered on that strong performance in the tackling department. Though Pittsburgh missed double digit tackles once again, the Steelers were able to pull out a victory while doing so for the fourth time this season, and the second time against the Ravens.

In total, Pittsburgh missed 10 tackles on the road in poor conditions against the Ravens.

For the final time in the 2021 regular season, let’s take a look at the missed tackles report from Week 18.

Looking at the numbers from Sunday’s game, none of the missed tackles resulted in any sort of splash play, so that’s very positive.

Reaching double digits in missed tackles can seem like a lot — it is, not denying that part at all — but when you take into context that none of the misses resulted in key plays for the Ravens, you’re more inclined to be happy with that, especially in a win.

I have three misses I wanted to highlight from Sunday’s win before we turn our full attention to the Chiefs.

Let’s start with rookie Isaiahh Loudermilk, who has played pretty well down the stretch for the Steelers after being pressed into action due to injuries. He’s been rather solid against the run, which was his calling card coming out of Wisconsin. He’s shown some juice as a pass rusher though, but he missed a sack on Baltimore’s Tyler Huntley late in the first quarter Sunday.

Loudermilk plays this really well against the mobile Huntley, holding up in the pass rush and keeping eyes on the young Ravens’ quarterback. He disengages well and gets an arm around Huntley, but he’s unable to finish the play. Cameron Heyward comes in for his 10th sack of the season, firing up a young Loudermilk early in a pivotal game.

Ironically, Heyward missed a sack early in the second quarter, which should have been his 11th of the season.

Heyward does a great job walking Baltimore left guard Ben Cleveland backwards into the lap of Huntley, who wisely pulls the ball down and tries to slip through the middle of the Steelers’ defensive line to take advantage of the great space in front of him.

Heyward disengages quickly though and has what appears to be his second sack of the game, but he can’t finish it off. Fortunately for the Steelers on 3rd and 4, fellow defensive lineman Chris Wormley is able to track down Huntley for a 2-yard gain, forcing another Ravens’ punt, which they’d end up running an unsuccessful fake punt on.

Finally, early in the third quarter after the Ravens tied the game right before halftime, Baltimore was on the move again offensively. That’s when cornerbacks Ahkello Witherspoon and Arthur Maulet combined for missed tackles on a simple swing route to Ravens’ running back Devonta Freeman out of the backfield.

For as good as Witherspoon has been in coverage, he’s been exactly as bad as a tackler, which really kind of fits who he’s been throughout his career. He has a tendency to leave his feet at the point of contact, taking his best asset — force — away from him. He leaves his feet here against Freeman in space and ducks his head going for the arm tackle.

Though he makes contact with Freeman, the veteran running back is easily able to spin out of the attempt. Maulet comes flying in and fails to wrap up, sliding right off of Freeman as well. Thankfully Steelers’ linebacker Devin Bush is there to clean up the mess, resulting in just a 5-yard gain. Bet you weren’t expecting to read that sentence, were you?

Even though he missed a great deal of time in Sunday’s overtime win due to an elbow injury suffered on the first drive of the game, Steelers’ rookie running back Najee Harris had one of the biggest forced missed tackles of the day, and it came in overtime.

First of all, that’s an incredible catch by Harris with his left hand reaching above and behind him to snag the checkdown throw. If he doesn’t get a hand on this and haul it in, that might be a pick-6 for Ravens’ linebacker Patrick Queen. After making the absurd catch, Harris is able to force Queen to miss in space with great hesitation to set up Queen, and then great burst to get outside, picking up 11 yards to move the chains.

It’s just a simple stop route to show Ben Roethlisberger his numbers, but once he makes the catch Freiermuth does an awesome job turning upfield, slipping around Queen and then lowering his head to barrel past the first-down marker, setting up the Steelers inside the 5 yard line. He’s become really good after the catch, which is nothing but positive and promising for the Steelers’ offense moving forward.