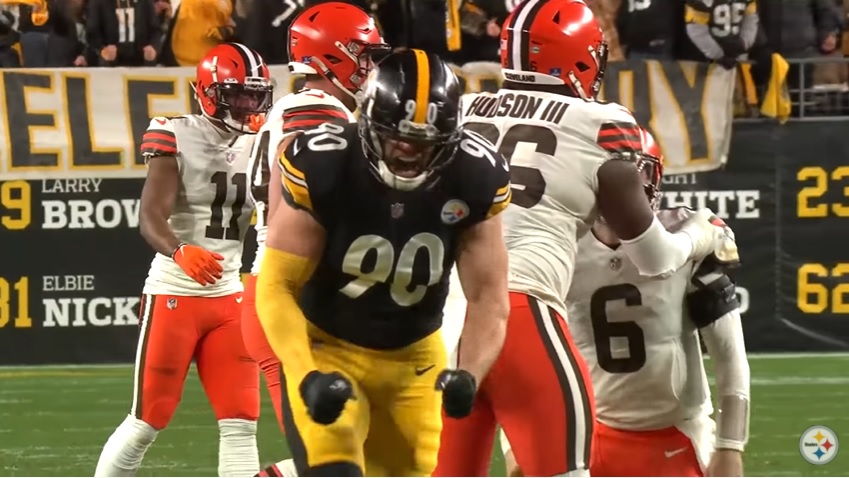 In the highly anticipated Monday Night game against the Cleveland Browns that has been dubbed QB Ben Roethlisberger’s curtain call at Heinz Field before riding off into the sunset, several of his teammates stepped up in a big way to ensure #7 walked off his home field one last time in victory, defeated Cleveland by a score of 26-14. One of those players is T.J. Watt who reminded everyone in primetime that he is the rightful heir to the Defensive Player of the Year Award that has alluded him the past two seasons.

Watt terrorized QB #6 Baker Mayfield and the Browns offensive line all night, taking advantage of the injury to starting RT Jack Conklin and abusing rookie OT #66 James Hudson in pass rush situations. Watt finished the night with five total tackles (all solo), three TFLs, five QB hits, four sacks, and two PBUs. Simply put, it was yet another performance for the ages under the lights at Heinz Field that Watt has accomplished several times this season, putting whatever doubts there were about his candidacy to win the award to rest.

Watt was breathing down Baker Mayfield’s neck the entire game, having not problems defeating Hudson around the edge to finish with the sack. Watch Watt’s first sack of the night where he gets into Hudson’s chest with his hands then swipes Hudson’s hands away as he gets into the pocket to wrap up Mayfield and swing him down to the ground.

The play just prior to the sack, we see the instincts of Watt shine in his ability to recognize the pass and get his hands up in the passing lane to knock down the quick pass by Mayfield to the right side of the field on the curl route. Watt didn’t have much of a chance to get to Mayfield before the ball comes out, but he does the next best thing, knocking the ball down at the LOS which Mayfield dealt with plenty in this game by multiple Steelers’ defenders.

The more recognizable batted pass by Watt comes later in the game where Watt stops his rush almost immediately as Mayfield drops back to pass, reading the QB’s eyes and times his jump into the air to knock down the ball that is low coming out of its release point. Watt then proceeds to get in Mayfield’s head after, pointing at him and talking some smack knowing he has the opposing QB flustered.

Now, back to the sacks. Near the end of the first half, the Browns are driving into Pittsburgh territory looking to score and get the ball back after intermission. Watt has other plans, however, and drives Hudson back with a strong bull rush on third down, proceeding to bend the corner and rip through with his right arm as he flattens into the pocket and takes out Mayfield’s legs from behind, cutting him down to end the drive and force Cleveland into halftime with a goose on the scoreboard.

Here is a zoomed-in pocket view of the play, showing Watt’s to rip Hudson’s hands down and bend the edge to get to Mayfield.

The next sack by Watt will be heavily disputed and was questioned at the time whether it would actually hold up in the stat sheet. As of Tuesday afternoon though, the sack holds up in the stat sheet for both the NFL and Pro Football Reference. Watt counters inside across Hudson’s face on his pass rush, spinning back out and running toward the sideline once he sees Mayfield taking off out of the pocket. Mayfield then proceeds to give himself up on the side, initiating his slide right at the LOS where Watt touches him down shortly after. The Steelers stat keepers credited Watt with the sack, and while it was heavily debated afterwards, the credit to Watt still stands on this play.

Watt’s final sack of the night comes near the end of the fourth quarter where the Browns are driving to make it a one-score game. You see on the snap of the football that Watt is out of his stance before anyone else, showing impressive burst in his get off as he immediately attacks the outside shoulder of Hudson trying to establish the depth of the pocket. Watt hits Hudson with the two-hand swipe move to knock his hands down and keeps his feet around the corner, closing in on Mayfield and pile drives him into the ground for his fourth sack of the game and 21.5th of the year.

T.J. Watt has consistently shown up in the moments where Pittsburgh has needed him most, making splash plays in primetime under the lights where everyone is watching. In the four home primetime games Watt has played against the Seahawks, Bears, Ravens (afternoon), and Browns, he has 12.5 sacks. Watt is currently one sack away from tying Michael Strahan for the most ever in a single season, all-the-while missing two games due to injury and leaving several others early to injuries sustained in the game. He is playing through a groin injury and cracked ribs, still dominating his competition, and playing at an All-Pro level through it all on a defense that has struggled mightily at points this season.

Whether or not Watt breaks the record next week at Baltimore (which we all hope happens) shouldn’t dictate if he wins the DPOY award or not. Personally, Watt already has that hardware in the bag, and it is being shipped to his address as we speak. In a game where we have likely seen the end of an age for an icon in Pittsburgh Steelers lore, another has shown he is worthy to be handed the torch and carry on the legacy as the face of the franchise for years to come.

What are your thoughts on T.J. Watt’s performance against the Cleveland Browns? Do you think his impact has locked up the DPOY award? Are you in the belief that he will break the single-season sack record? Is Watt deserving to be called the next all-time great in Steelers history and the next face of the franchise with Ben Roethlisberger riding off into the sunset? Please leave your thoughts in the comments section below and thanks again for reading!