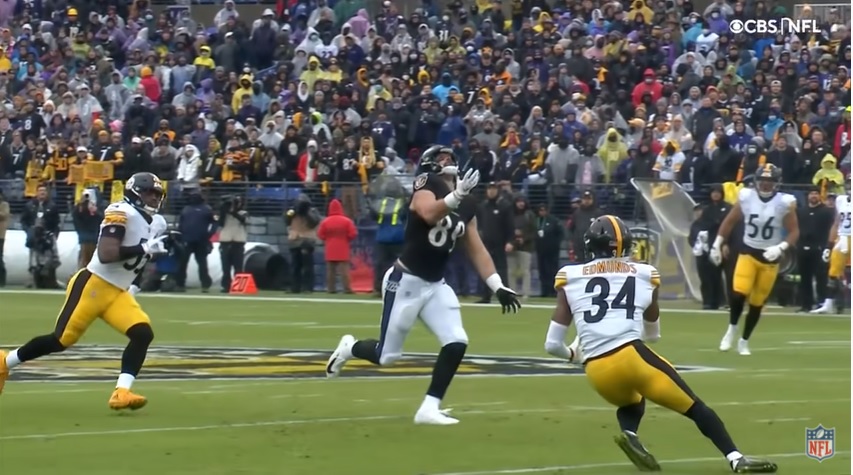 After entering Sunday with just an 8% chance of making the NFL playoffs, the Steelers took care of business, securing an overtime 16-13 win on the road against the division rival Baltimore Ravens. Courtesy of an improbable Jaguars win and the aversion of a near Sunday Night Football tie, the Steelers have secured a trip to Kansas City this upcoming Sunday Night as the 7th seed in the AFC. After struggling at times throughout his first season as a full time starter, Cam Sutton played arguably the best game of his career in Week 18, helping the Steelers hold Tyler Huntley 16/31 passing for 141 yards, good for an average of just 4.5 yards per attempt, to go along with zero touchdowns, two picks, and a porous passer rating of 37.2.

In his first season as a full time starter, Sutton has largely proven to be a competent starter as a boundary cornerback with sub package versatility, finishing the year with 52 tackles, four tackles for losses, a forced fumble, six pass breakups, and two picks in 16 starts. In his final game this season, Sutton compiled five solo stops, a pass breakup, and a crucial red zone interception, helping shut down Baltimore’s quick game passing with a combination of patience and physicality in coverage.

After a discouraging Week 12 blowout loss in Cincinnati, the Steelers went 4-2 in their final six games, holding their opponents under 20 points in all four wins. While the team’s rush defense finished 32nd in the league, they have been phenomenal situationally, finishing 9th in the league in passing yards allowed per game, 5th in red zone defense, and 7th in third down defense. A large part of the team’s late season defensive improvement has centered around the cornerback duo of Cameron Sutton and Ahkello Witherspoon, allowing the defense to get back to playing man coverage and relying on their potent four man rush, helping the unit generate pressure and create turnovers at a steadily improving rate. Today, we’ll be taking a deeper look at Cam Sutton’s performance in Week 18 against the Ravens.

During the draft process, it was reported that Mike Tomlin was impressed by Cam Sutton’s knowledge and football IQ, traits which have helped him become an elite communicator at the NFL level. On the rep below, with the Steelers in Cover 3, Sutton at five yards depth before giving an in-call to Minkah Fitzpatrick and zoning off to replace the post safety and protect against the post.

Although the post/over concept is a classic Cover 3 beater, high level communication in the secondary can make the zone coverage malleable and able to deal with a wider range of route combinations. Having high-level communicators at the cornerback position, such as Cam Sutton, allows an elite safety in Minkah Fitzpatrick to play more freely and increase his impact on the game.

Single high coverages, namely Cover 1 and Cover 3, are often described as coverages which close down the middle of the field, and force quarterbacks to make tough throws outside of the numbers. One of the major weaknesses of Cover 3 is that corners are forced to protect their deep zones; short “access” throws, such as out routes and hitches, are often uncontested.

That being said, in recent weeks, Witherspoon and Sutton have done a great job of slowing down their tempo in Cover 3 until their cushion is threatened, keeping themselves in phase to contest quick game passing, the coverage’s major weakness. On the rep below, Sutton aligns with inside leverage at five yards, opening into a crossover run at the snap while keying Huntley’s drop back, identifying the three step drop, and planting to drive on the hitch and tackle it for a short gain of three yards.

The Steelers four man pass rush works best when the Steelers cornerbacks are able to flourish in tight man coverage and force quarterbacks to hold onto the football as we saw in 2019 and 2020. Working in press man coverage in a Cover 1 scheme to the top of the screen, Sutton aligns with inside leverage, mirroring the receivers release before getting hands on, and disrupting the receivers ability to get to his landmark on schedule.

While Maulet struggles to match Reshod Bateman in the slot, note both Sutton and Witherspoon allow no separation on the rep, showing the duo’s ability to flourish in press man coverage.

One of the Steelers favorite pressure concepts over the past three seasons has been a Cover 1 Nickel blitz, which forces the quarterback to get the ball out quickly. Understanding this, a high IQ cornerback in Cam Sutton is able to slow down his tempo and prepare to jump short and intermediate routes.

Aligned in off man coverage at seven yards depth below, Sutton backpedals with inside leverage before planting with a smooth T-step break, closing to undercut the curl route, one he likely picks if not for Arthur Maulet’s hit on Tyler Huntley. Reps like this help show the confidence and understanding of the wider defensive scheme.

While he has transitioned to become a full time starter on the boundary, Sutton’s versatility to move around in the teams sub packages continues to increase his value on this defense. On the rep below, aligned in the slot, matched up with Hollywood Brown in a Cover 1 man scheme, Cam Sutton aligns in press man coverage.

At the snap, Sutton mirrors Brown’s diamond release, shuffling outside before getting hands on the upfield shoulder and staying connected as the receiver breaks inside on the slant, allowing no separation in the process.

On a later rep, with the Steelers this time in Cover 2 man, Sutton is able to slow his tempo down and play even more aggressively with his over the top safety help. Once again aligned in off man coverage at eight yards depth with inside leverage, Sutton backpedals off the line before opening into a T-step break, and closing to undercut the curl route. All game, Sutton showed great understanding of the defense’s wider scheme, using his help defenders to take calculated risks and jump shallow and intermediate routes.

After struggling in the tackling department at the collegiate level, Sutton’s overall physicality has vastly improved over the past three years in Pittsburgh. Working in a Cover 1 man scheme below, Sutton identifies the pick route, gives an in-call, and closes to the flat, shooting low to cut down Devonta Freeman just past the line of scrimmage. This rep not only shows Sutton’s physicality, but also his football IQ, allowing him to quickly diagnose the pick route and trigger to the flat.

On a crucial third midway through the third quarter, Sutton is once again aligned as a slot defender, this time operating as the flat defender in a Cover 3 scheme. After bluffing a blitz pre snap, Sutton widens to the flat, gaining depth and occupying the intermediate window to force the checkdown. As Huntley throws the out route to Hollywood Brown, Sutton closes to the upfield shoulder and dives low to force the receiver out of bounds short of the sticks, resulting in another Baltimore punt around midfield.

Sutton’s biggest play of the game came on the first snap of the fourth quarter, working as a deep 1/3 defender in the Steelers Cover 3 scheme in the red zone. At the snap, Sutton gives an in call and zones off to his deep 1/3, gaining depth and width while eying Tyler Huntley. Upon seeing Huntley pull the pin on a throw toward Mark Andrews working up the seam, Sutton plants, closes laterally, and makes a diving catch to undercut the seam ball and secure a crucial red zone interception.

While plays down the stretch by McCloud, Najee, Minkah, were equally important, it was ultimately Sutton’s interception which prevented the Ravens from taking a two score lead and spurred the Steelers comeback. Likewise, it’s fitting that Sutton capped off his first season as a full time starter with a pivotal fourth quarter interception, making arguably the most impactful play of his career in Week 18 to help send this team toward an improbable playoff berth.

Since Witherspoon took on a larger role in the lineup in Week 13, the Steelers have gone 4-2, and played well against the pass larger due to the play of him and Cameron Sutton on the boundary. Within that stretch, the Steelers have opted to play man coverage at an increased rate, helping the team force quarterbacks to hold onto the football and make tough contested throws outside of the numbers.

All that being said, the Steelers got lit up in a Week 16 matchup in Kansas City, allowing Pat Mahomes to go 23-30 for 258 yards, and 3 touchdowns, failing to generate a turnover as the Chiefs carved the Steelers zone coverage apart. As the blitz tends to produce even worse results against Kansas City, the team’s best option this Week may be to take their chances with Cameron Sutton, Ahkello Witherspoon, and Joe Haden in isolated matchups against the Chiefs talented receivers.

I anticipate the Steelers come into this game with a far more man heavy approach, potentially using Minkah Fitzpatrick and Terrell Edmunds to create double teams on Travis Kelce and Tyreek Hill. Regardless, they are going to have one on one opportunities, and the ability of the pass rush to contain Pat Mahomes within the pocket, and the cornerbacks ability to make plays in their isolated matchups will largely determine if the Steelers can compete this time around.