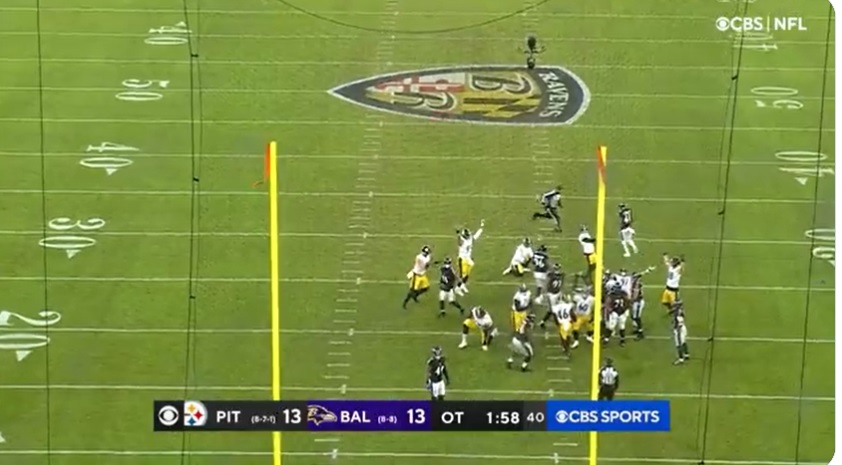 Few do it better than Chris Boswell.

Boswell had a perfect 3/3 performance on a wet, muddy Sunday in Baltimore, none bigger than his 36-yard overtime winner. A kick that almost certainly puts Pittsburgh in the postseason.

Cool, calm, and collected on and off the field, Boswell talked about his job in clear, calculated terms.

“This team deserves [to make the playoffs] and we’ve been battling our asses off,” he told reporters postgame via the team’s YouTube channel. “I’m just here to do my job and kick it through the pipes. And I was fortunate enough to do that tonight.”

Boswell finishes a strong 2021 season 36/40 on field goals while missing just a pair of extra points. He’s become an elite kicker, and if it was not for the man he played opposite of today, Baltimore’s Justin Tucker, he would get more league-wide recognition. Not to mention a Pro Bowl bid, losing out to Tucker this year.

Unflappable, Boswell – like so many of his teammates – just cared about getting the win. For Ben Roethlisberger and for the rest of the group.

“Whatever happens, happens in the game, I’m not gonna try to look to the future or try to predict what’s gonna happen. If they need a kick, they need a kick. If we don’t, then I’m fine with that too. As long as we get a win.”

Over the course of his career, Pittsburgh would have several fewer wins without Boswell’s leg. Aside from an injury-plagued 2018 season, he’s been money and has earned every penny of the contract extension he received years ago. Kicking numbers skew to modern players, but Boswell’s field goal percentage rate is third-highest in NFL history.

The Steelers aren’t a team to win big. They win ugly and they win close. Should they find themselves in that situation during Wild Card weekend, they’ll confidently call on Boswell again.