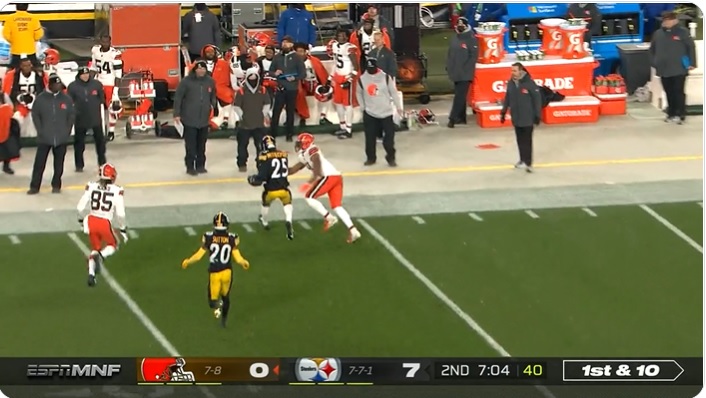 We wrote early in the season the Pittsburgh Steelers’ personality had changed. They were blitzing less, and were a less aggressive unit playing more zone than man coverage. In early October, we noted the Steelers’ zone coverage rate was up ten points from where it stood a year ago, and eight points from 2019.

Monday night’s win over the Cleveland Browns was different. Pittsburgh got back to its roots. An aggressive, blitzing team that sacked QB Baker Mayfield nine times, the most they have ever sacked a Browns’ team in a single game. In the back end, they played more man coverage, so much so that CB Ahkello Witherspoon told reporters it’s the most man-coverage Pittsburgh has played all season long.

Witherspoon went on to say the increase in man coverage was designed to stop the Browns’ run game. To get more eyes on the football and play with more players crowding the line of scrimmage. In the run and pass game, it worked. The Browns, though strangely uncommitted to running the football, were held under 100 yards, just as they were in their first meeting. Mayfield was a mess as a passer, starting the game 1/11 with an interception, picked off by Witherspoon in man coverage.

Overall, Mayfield finished the day completing less than half his passes for 185 yards, an average of 4.9 yards per attempt, with two interceptions. Even taking into context his injury, this season and this game in particular may cause the Browns to rethink their future with Mayfield leading the charge.

Pittsburgh has played more zone coverage this season as an attempt to play a “safer” defense. To play more conservatively, to try to avoid getting beat deep, and to manage a secondary undergoing change and a group simply having less talent at cornerback after losing Mike Hilton and releasing Steven Nelson.

Tonight though showed this group has talent and a guy like Witherspoon potentially has a future in Pittsburgh. That is, if they can re-sign him this offseason.