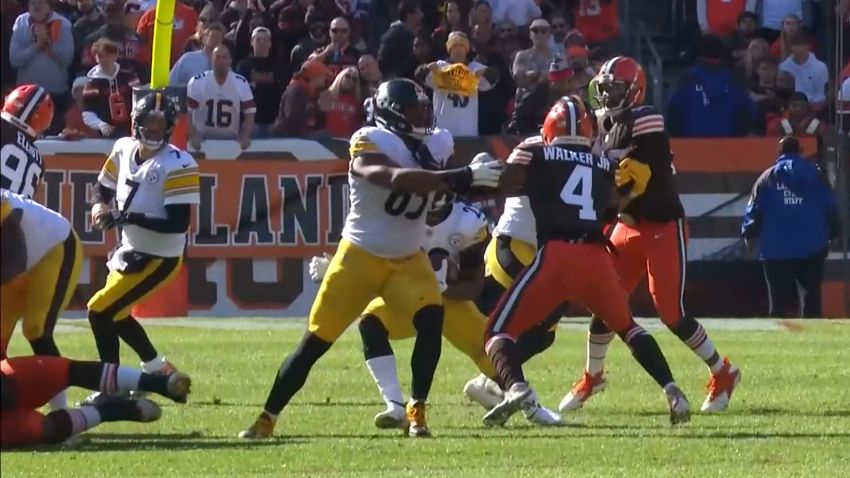 Topic Statement: The Steelers will give left tackle Dan Moore Jr. more help in his second go-around against the Browns.

Explanation: The Steelers’ first game against the Browns this season was arguably Moore’s worst during his rookie year (it certainly is if you go by Pro Football Focus). Myles Garrett in particularly had a field day with him as a pass rusher. While he didn’t set any sack records, he was a regular presence in the backfield and greatly stressed the passing game, forcing shorter and shorter throws.

While that particular game in terms of pass-blocking tape was a dumpster fire, Dan Moore hasn’t had a bad rookie season, all things considered. And the reality is that they have left him on his own for the most part all year, anyway.

Myles Garrett isn’t the first nor last great pass rusher he’s faced. He just happened to have a really good day. And he’s not going to have the same effect tomorrow dealing with an injury that has been limiting him lately.

They won’t provide him extra help, simply because that’s not really what they’ve done, and also because they have Jadeveon Clowney to worry about on the other side, as it is. They’ve trusted Moore this far, why stop now?

You stop because you saw what happened last time. Injury or not, Garrett has been by far the most effective pass-rusher working against Moore, and both of them have access to that tape to see what worked. You have to do something different if you want to see different results.

And, well, we do have a Wild Card at play. In case you’ve forgotten, ‘C-Mo’, Chris Morgan, is suddenly the Steelers’ new offensive line coach after Adrian Klemm just left to take the same position at Oregon. It would be foolish to assume that he’s going to do the exact same things Klemm was doing.

Klemm brought his own vision after being promoted from assistant. Morgan was hired just this year, and he has several years of NFL experience as an offensive line coach. He’s not a ‘Steelers system’ guy. He can’t rewrite everything in a week, but he can change minor things like adjusting protection priorities.